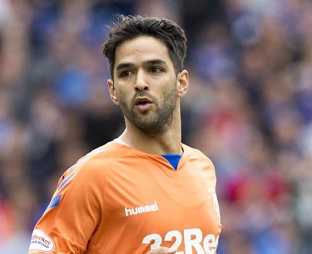 Daniel Candeias produced a remarkable performance in the Turkish Super Lig on Saturday afternoon, scoring a first-half hat-trick and laying on two assists as Genclerbirligi ran out 6-0 winners at Antalyaspor.

The former Nacional, Metz and Rangers forward had yet to score for his new club since his summer arrival, but Candeias broke his duck after just one minute of this weekend’s game and went on to fashion one of the most memorable afternoons of his career.

The visitors, who are struggling in the relegation zone of the Turkish top flight, got off to the perfect start with just a minute played when a horrible error from Antalyaspor goalkeeper Ruud Boffin allowed Bogdan Stancu to set up Candeias for his first goal in Genclerbirligi colours. Candeias then turned provider with some wonderful wing play to cross for Giovanni Sio to make it 2-0 on 13 minutes.

A relentless Candeias put the away team 3-0 up after twenty minutes when he harried the Antalyaspor backline out of possession and slotted past Boffin. The blistering start from Candeias and his teammates continued and resulted in home defender Bahadir Ozturk being panicked into a last-man foul on Sio which saw him sent off and reduced Antalyaspor to ten men in the 23rd minute.

Candeias completed his treble in the 37th minute, exchanging passes with Stancu before lobbing the ball over Boffin. There was still time before the break for the 31-year-old Portuguese to tee up Sio for Genclerbirligi’s 5th on 42 minutes, giving the previously struggling visitors an unthinkable lead at half time. Romanian midfielder Stancu added the final goal in the 57th minute of the second half.

The win was Genclerbirligi’s first of the season and therefore Candeias’ side remain in the relegation places. However, having held champions Galatasaray to a draw before the international break, things appear to be picking up for both the team and their in-form Portuguese.

Rangers could have done with this man at the weekend. Still sad we lost him but glad to see this performance from him.

Pola33
There are no comments posted here yet