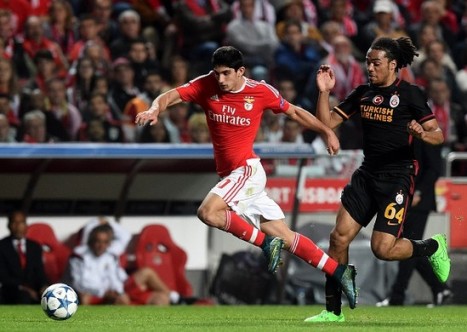 These are exciting times for Portuguese football. A brilliant generation of players are on the cusp of breaking into the national team, with the likes of William Carvalho, Bernardo Silva, Danilo and André Gomes all expected to play a big part in the Seleção in the near future, very possibly as soon as at Euro 2016.

A few years younger, two more outstanding talents are making a big name for themselves. Porto’s Rúben Neves was yesterday called into the full Portugal squad to replace the injured João Moutinho. And Benfica’s Gonçalo Guedes has also been hitting the headlines all season. Both precocious talents are just eighteen years of age. The last time an 18-year-old was called up to the full Portugal squad he went by the name of… Cristiano Ronaldo.

Portuguese website Maisfutebol yesterday published an article looking at the back story of Guedes, Benfica’s man of the moment. Read an abridged and translated version of Sérgio Pereira’s revealing article.

Gonçalo Guedes is riding high. On Sunday he scored Benfica’s opening goal in the victory against Boavista, netting for the second liga match running. It was a suitable way of celebrating his call-up to Portugal’s national team, on Friday afternoon.

Guedes says he likes Ronaldo, but doesn’t like being compared to Ronaldo. The international call-up will likely only multiply the comparisons: since Cristiano, no other 18-year-old had made the full Portugal squad. Until now.

Like most football stars, Gonçalo Guedes and his family had to make sacrifices to get to where he is today. In his case, the sacrifices can be measured in kilometres.

No toys – just a football

“Thanks to him I drove an average of 60,000 kilometres a year, going from Benavente to Lisbon (60-km journey) and back and I went through a series of cars,” smiles his father Rogério Guedes. “We lived in Benavente and there was a pitch behind our house. Gonçalo was always either in the street playing football or at the pitch side watching the older lads training. I think that’s where he got his football ability. Since he was a kid he never wanted any other toy. He always had a ball with him, sometimes more than one. He was crazy for football.”

Gonçalo has a brother who is two years older than him, who began playing for his local football school. Gonçalo would go with his brother but he couldn’t play in the team because he wasn’t old enough. However, when tournaments came around which did not require the ID cards of the kids to be shown the coach put him in the team, playing alongside children who were two, three or four years older than him.

“He was always the best player and won games on his own,” says his father.

Hardly surprising, therefore, that friends and neighbours insisted with his father that he had to take him to Benfica. One day Rogério Guedes did just that. Gonçalo was just five years old, almost six, and he went to train at the Geração Benfica.

“He did one training session during the week and played one game at the weekend, and it was enough for Benfica’s people to come and talk to me. They wanted him to be part of the Geração Benfica, which is a more advanced level for the best kids.” Gonçalo Guedes’s career had started – at five years of age! The life of the Guedes family changed forever.

“At the time I worked in Lisbon so I drove there in the morning, and when I finished work I came to Benavente to fetch Gonçalo, and returned to Lisbon. At around nine o’clock at night we came back home,” explains his father. “I did 200km a day, three days a week. As I had two children, and neither is above the other, they both played for Benfica. At times it was a marathon: I left one son at Seixal [Benfica’s training complex, 25km outside Lisbon], took the other to Olivais [in Lisbon], waited until he finished training and then together we’d go and fetch his brother.

“At weekends it was non-stop! We were always busy. We travelled the whole country going to tournaments they took part in. Once we went with Gonçalo to the Algarve on the Saturday, and on Sunday we were with his brother in Porto. Our weekends were organised around them.

“One weekend I went to Rome with Gonçalo for a tournament, while my wife went with our oldest to another tournament in Spain. The Rome tournament involved 500 kids, all from major teams, and Gonçalo was elected the best player.”

At eight years of age Guedes became a federated athlete. In his first year he was coached by João Barbosa, the current coach of Oriental in Portugal’s second tier.

“He was a kid who was extremely focused on his objectives and who wasn’t really interested in stardom. He exuded happiness, he was really happy just playing football, very closed in on himself but very independent. He seemed like a small adult,” says Barbosa.

The same character traits are evident today: the very opposite of the prototype of a footballer. He is not blinded by fame, he has no tattoos, he doesn’t wear jewellery or even spend time playing Playstation.

Another of Guedes’ coaches, Helena Costa, confirms that as well as his fantastic football ability, his personality is one of his biggest assets. “He was always good fun and liked joking around, but he is also very considerate and humane. When I was working in Qatar we were talking on Facebook and he sent me a message saying he’s got something for me. It was the shirt of his first Portugal appearance, at Under-16 level. I was in Qatar, we didn’t have much contact, but he kept the shirt, signed it and gave it to me. This shows his character, his sense of gratitude. He was a very cheerful kid, great fun, but very dedicated to working for what he wanted.”

His dedication to football has brought its rewards, albeit at a price. Gonçalo had to leave school at 15 years of age, the same age that he also left home to board at Benfica’s Training Complex. At 16 he signed his first professional contract, began to earn his own money and moved into a house with his girlfriend. Still today, however, he often goes to his parents’ home, in Benavente, to sleep.

And it was on one of these days, when he was 17 years old, that he received a phone call summoning him to the Benfica first-team get-together ahead of the Champions League game against Monaco. It was only the second time he had been selected for the senior team. After just half a season to adapt to elite-level football, he has made a place in the first team his own in 2015/16, responding to the faith shown in him by coach Rui Vitória with goals and stunning displays.

So much so that Portugal coach Fernando Santos included him in the squad for the upcoming friendly matches against Russia and Luxembourg. “It’s recognition of a life given to football,” he said upon hearing the news.

But at 18 years of age, he still has his whole life ahead of him to give to the game.

Translated and abridged version, by Tom Kundert, of MaisFutebol article published on 09/11/2015.

Our thanks to MaisFutebol for granting permission to reproduce the article.

Related: Exclusive video interview with Gonçalo Guedes ahead of U20 World Cup