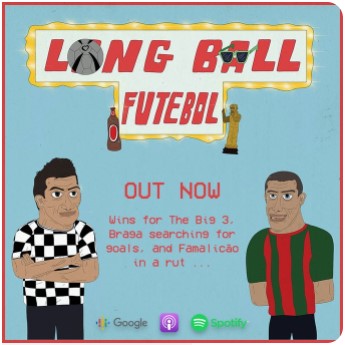 Jornada 7 of the 2021/22 season is over, and Barney and Albert are back to round up all the action from another week of football in the Portuguese top flight. On this week’s show, they discuss Benfica’s continued impressive form, but what exactly is their best XI? And how far could they go unbeaten this season?

Porto earn another good win but it’s a very different story from last week, and Sporting grab another late victory, but are dramatic winners papering over the cracks for them this season?

Further down the table, there’s discussion of one of the most exciting games of the week between Tondela and Famalicão, but with Famalicão rock bottom of the table, where are that fearless, impressive side we saw at the end of last season? Plus, we talk about the legacy of Douglas Tanque after he heads off to the Middle East, assessing his impact on Paços de Ferreira’s recent history, and Barney’s heart…

To listen to show click on the play button below:

Related: Sporting and Porto leave it late to stay on Benfica’s coattails; Eagles see off Vitória in Guimarães