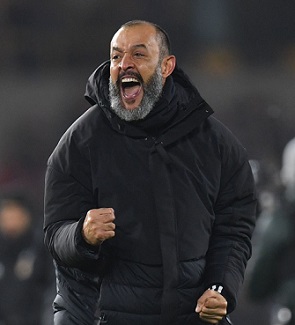 Wolverhampton Wanderers completed a double over Premier League champions Manchester City by coming from two goals down to win a classic encounter 3-2 at Molineux on Friday evening.

The visitors were reduced to ten men early on but looked to be in command early in the second half with a 2-0 lead, but Nuno Espírito Santo’s side staged a late comeback to take all three points and continue their impressive form.

Nuno selected the familiar Portuguese quartet of goalkeeper Rui Patricio, Rúben Neves, João Moutinho and Diogo Jota, and although none got their name on the scoresheet the Luso contingent featured heavily in proceedings. Rúben Vinagre and Pedro Neto joined the action as Wolves chased the game, while João Cancelo was an unused substitute for City.

Wolves were given a significant early advantage when visiting goalkeeper Ederson was sent off for bringing Jota down outside the penalty area after just 11 minutes, but it would be City to score first after a penalty was awarded midway through the first half. The goal was a source of great frustration for Rui Patricio who twice saved Raheem Sterling’s penalty, which was retaken due to encroachment, with the second save falling kindly for Sterling to convert the rebound.

Sterling doubled the advantage for 10-man City early in the second half, but Adama Traore’s long range effort quickly brought Wolves back into the game on 55 minutes. Vinagre and Neto entered the action during the last quarter of the game and Raul Jimenez’s equaliser (82’) set the scene for Wolves to snatch all three points two minutes from time through Matt Doherty.

“We are relentless and will keep on going, it doesn’t matter what happens, we want to compete,” Nuno told reporters after the match. “We had to stay in the game. We got punished with one mistake in the second-half, when we didn’t press well, but we reacted very good.

“The way we achieved the goals was very good, the way we reacted, the way we kept players with so much quality under pressure – it requires a lot of effort.

“Tonight, no matter what the result, I must be proud of the way the players played. We made mistakes, but let’s be fair to the game, everything changes when City have one man less.

“We had much more of the ball but had to find solutions. Second-half we reacted, played the way we want to do things, combining one side to the other, one versus one in the wide areas, and I’m delighted.”

Wolves have now lost just one of their last fourteen league matches – the last-gasp defeat to Jose Mourinho’ Tottenham earlier this month – and move back to 5th place. Nuno’s men are now just two points off the top four places after Chelsea’s surprise defeat to Southampton.