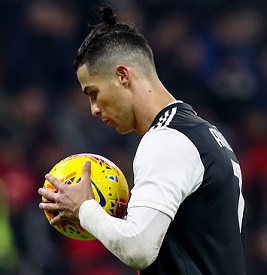 Cristiano Ronaldo won and then scored a late penalty to give Juventus a significant advantage in their Coppa Italia semi-final first leg with AC Milan.

Juve trailed 1-0 at San Siro with just a couple of minutes of normal time remaining when Ronaldo connected at the far post with a scissor kick, which was blocked by the arm of Davide Calabria. A penalty was awarded and Ronaldo converted to put the visitors level ahead of the return leg next month.

Ronaldo started for the eighth time since the turn of the year, with the Portugal captain aiming to maintain his record of having scored in every match in 2020. For Milan, Rafael Leão was issued a place on the bench and the former Sporting man remained on the sidelines for the duration.

After a goalless first half, Ante Rebic put Milan ahead on the hour with a well-taken finish. With the hosts in the ascendency, a critical moment in the game occurred ten minutes later when Milan defender Theo Hernandez was sent off for a second bookable offence, allowing Juventus to build pressure during the latter stages.

The penalty, which arrived after consultation with VAR in the final minute, was controversial. Ronaldo’s effort struck the arm of Calabria, who was facing away from his opponent, but referee Paolo Valeri decided an offence had been committed and the Portuguese smashed his spot-kick past Gianluigi Donnarumma to make it 12 goals in his last 8 matches.

The return leg in Turin is scheduled for 4th March, while Juve’s next league game sees them host Brescia on Sunday. Milan will entertain Torino on Monday, with 20-year-old striker Leão hoping to for more playing time under Stefano Pioli.