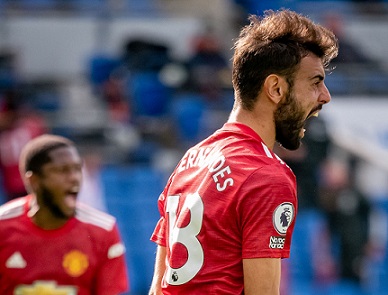 João Félix and Cristiano Ronaldo were the high-profile goalscoring stories in the Portuguese Abroad section on Sunday evening, but it was another successful weekend in front of goal across the continent for the Luso contingent.

Bruno Fernandes’ dramatic late penalty saw Manchester United snatch victory against Brighton in the Premier League on Saturday lunchtime, after which André Silva continued his goalscoring form in Germany and William Carvalho inexplicably made it two goals in a week with another strike for Real Betis against Real Madrid.

Elsewhere, veteran striker twins Marco and Flávio Paixão scored six goals between them in Turkey and Poland respectively, while there were goals in Greece, Bulgaria and Switzerland, as well as another for Lucas João in the English Championship with Reading.

Manchester United’s remarkable 3-2 victory at Brighton and Hove Albion on Saturday lunchtime was an enthralling opening to the weekend’s action. United came from behind to lead 2-1 heading into injury time, before conceding an equaliser to make it 2-2 only to then be awarded a penalty after the final whistle had blown for a handball offence, with Bruno Fernandes duly converting the spot kick.

United were far from at their best and the overwhelming sense in the post-match analysis was that Brighton were considerably the better side. Fernandes was among those who struggled to impress during the opening hour, but the former Sporting midfielder once again proved his match-winning quality with several moments of brilliance during the last half hour.

Fernandes’ perfectly-weighted pass sent Marcus Rashford through to put United in 2-1 in front, while the Portuguese also created a good opening for Anthony Martial which the Frenchman was unable to capitalise on. But it would be in the 10th minute of stoppage time that Fernandes would make his biggest mark on proceedings after United were awarded a scarcely-deserved chance to win the match.

Having just conceded to allow Brighton level at 2-2, United won a corner and Fernandes’ delivery was headed towards goal by Harry Maguire only to be cleared off the line. The referee blew the full time whistle but was quicky alerted to a potential handball and after VAR consultation awarded United a penalty. Fernandes stepped up and calmly sent Matthew Ryan the wrong way and win the Red Devils the points.

United boss Solskjaer was asked about Fernandes’ composure from the spot after the match: “He’s very strong mentally,” Solskjaer said. “That’s a big part of being a penalty-taker. Goalkeepers and penalty-takers need to keep their focus and concentration and be mentally strong. Bruno has got one of the strongest mentalities I’ve come across.”

André Silva has now scored in both of Eintracht Frankfurt’s opening games of the new Bundesliga season, after a penalty set his side on the way to a 3-1 win over Hertha Berlin in the German capital on Friday evening.

Silva won the penalty himself to give the visitors a decisive opening goal after half an hour, drawing a rash challenge from Hertha’s Belgian defender Dedryk Boyata. Silva stepped up and fired past Alexander Shwolow in the Hertha goal to put Frankfurt ahead, setting them on the way to a 3-1 victory and 3rd place in the table after two rounds of action.

Carvalho strike not enough as Betis edged out by Real Madrid

Another Portuguese putting together back-to-back goalscoring displays is without question one of the least likely to do so. William Carvalho, who had not scored at all during his first two seasons with Real Betis, followed up his outstanding volley last week against Real Valladolid with another on Saturday against far more illustrious opposition.

Betis hosted champions Real Madrid in Andalusia in what proved a highly entertaining encounter. The home side fell behind early on to Federico Valverde’s goal, but Betis hit back to score twice in the space of two minutes in the 35th and 37th minute to take a surprise lead into the half time break.

Perhaps feeling the confidence of his team’s equaliser a couple of minutes earlier as well as the fresh memory of last week’s strike at the same end of the pitch, Carvalho ventured forward towards the edge of the Madrid penalty area where he received the ball from Nabil Fekir and smashed a left-footed shot into the bottom corner past Thibaut Courtois.

Betis ultimately contributed massively to their own downfall in the second half, beginning with Emerson turning the ball into his own net five minutes after the re-start. The Brazilian was later sent off for two bookable offences, before a handball offence gave Madrid a late penalty from which Sergio Ramos scored the winning goal.

Veteran twins Marco and Flávio Paixão scored a remarkable six goals between them this weekend in Turkey and Poland respectively, showing no signs of slowing down shortly after celebrating their 36th birthday.

Flávio – the younger twin by five minutes - was first this time, scoring two headed goals in the first half for Lechia Gdansk in Poland’s Ekstraklasa on Saturday in a 4-0 win over Podbeskidzie. The goals took Flavio, who is the highest-scoring foreign player in the league’s history, onto four strikes from just four starts so far this season and moved Lechia into 4th in the standing.

Marco is a former teammate of his brother’s at Lechia, but now finds himself a prolific goalscorer in the Turkish second tier, where he registered 22 for Altay last season – ten more than the nearest rival. This weekend saw Marco looking to get off the mark for the current campaign, which he did in sensational fashion with four goals in a 6-0 hammering of Eskisehirspor on Sunday.

A word on the Paixão twins, Marco and Flávio, who continue to defy age. They turned 36 earlier this month but scored six goals between them this weekend.

Flávio scored two for Lechia Gdańsk in the Polish Ekstraklasa, while Marco scored FOUR for promotion-chasing Altay in Turkey! pic.twitter.com/jckcXSAQnX

Reading are the surprise early leaders in the English Championship with three wins from their opening three games, and Portuguese striker Lucas João is giving every indication he will be one of the players to watch during the remainder of the season. The former Nacional man scored what proved to be the winner in the Royals’ 2-1 victory at Cardiff, taking Joao onto five goals from four matches in all competitions.

More evidence that Portuguese striker Lucas João is a player to watch in the Championship as he gets the eventual winner to send Reading top of the table this weekend pic.twitter.com/wFUCgzAIZK

In Switzerland, a nice moment for former Braga forward André Ribeiro, who came off the bench to score an 83rd-minute winner for St Gallen at Vaduz on Sunday afternoon in the Super League. Also in the Swiss top flight, 21-year-old striker Joel Monteiro was on the scoresheet for Lausanne in a 2-2 draw away to Luzern.

In Greece, there was a goal for midfielder Cafú during a 2-0 win for Pedro Martins’ champions Olympiacos over Panaitoikos. Elsewhere, Tiago Rodrigues scored for Bulgarian giants CSKA Sofia with a free-kick in a 2-1 defeat to Lokomotiv Plovdiv, while midfielder Adriel Santos’ goal failed to prevent Etzella Ettelbruck from losing 3-1 to Racing on Sunday in Luxembourg.