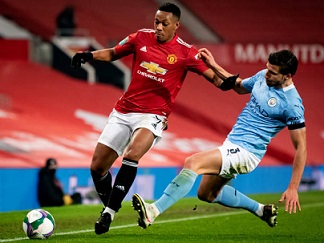 Mourinho’s Tottenham Hotspur beat Brentford 2-0 in the opening semi-final on Tuesday evening to book their place at Wembley, and City will be their opponents thanks to second-half goals from John Stones and Fernandinho saw them win a close-fought Manchester derby the following night.

Three Portuguese took to the field at Old Trafford, with Bruno Fernandes continuing for the Red Devils and Guardiola selecting Rúben Dias and right-back João Cancelo in defence. Bernardo Silva missed the match through suspension and was replaced in the City starting line-up by Riyad Mahrez.

While Stones and Fernandinho were the match-winners, former Benfica defender Dias was named Man of the Match after another imperious display. As well as making the most clearances and blocks for his side, Dias played 91 passes which was the most of all players on the field, leading to more praise from Guardiola post-match.

“Rúben lives with football 24 hours and he is giving us something special,” Guardiola said. “Congrats to Txiki and the club for bringing this player here because he will be outstanding for many years to come.”

Cancelo, who received a glowing appraisal from the City boss recently, also produced another solid performance at full-back. Fernandes, meanwhile, struggled to find his passing range for United in what was a rare ineffectual performance from the former Sporting midfielder.

City and Spurs will meet on Sunday 24th April, with Mourinho hoping to win his first trophy as Tottenham manager and the club’s first prize since claiming the competition in 2008.