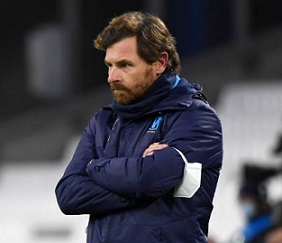 André Villas-Boas says it is likely he will leave the French club at the end of the season, with the team enduring a worrying slump in form across recent weeks.

Marseille appeared set for a title challenge after winning six straight matches between October and December, but a drastic drop in results has seen Villas-Boas’ team win just one of their last eight matches and slip to 6th in Ligue 1.

Villas-Boas has seen his position the subject of speculation, with Spanish coach Ernesto Valverde rumoured to be a possible successor, and during his press conference on Friday the former Porto man said he does not expect to remain in his post. “Leave at the end of the season? With the current situation I think so,” he told the French media.

“It will be a start from zero year for the club next season, I think we are all in agreement on that idea. I am not asking for anything, so I think that it will be the end.

“We are talking openly about this in the dressing room, there are many coaches who are about to end their contract. We have to be professionals. What happens next is not up to me, but I never received a proposal for renewal; it’s a subject that is dead. We are at an abysmal distance from the leaders in the league and the priority is not me, it is Marseille and their fans.”

Villas-Boas guided Marseille to an impressive second place finish during his first season in charge and a bright opening few months of the current campaign represented continued progress. Saturday night’s home clash with Rennes represents the opportunity to end a three-match winless run and recover from the slump which looks likely to cost the Portuguese his job at the Stade Velodrome.