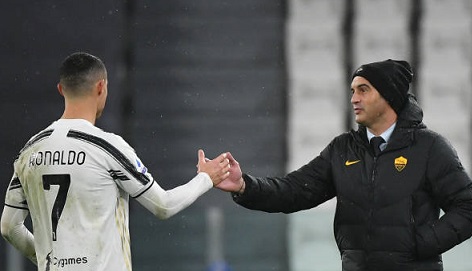 Goals from André Silva and Francisco Trincão on Sunday in the Bundesliga and La Liga respectively capped another strong weekend for some of Portugal’s most high-profile names after Cristiano Ronaldo and Bruno Fernandes had got themselves on the scoresheet the previous day.

Ronaldo scored and was widely praised for his role in Juventus’ 2-0 win against Roma in Serie A, while Fernandes scored with a fantastic long-range effort in the Premier League but was left disappointed as Manchester United were held 3-3 by Everton at Old Trafford.

Paulo Fonseca’s Roma were the latest to suffer at the hands of Ronaldo and Juventus in Italy, with the Giallorossi losing in Turin to end their recent good form. The Portugal captain put Juve ahead early on with a masterful left-foot finish from the edge of the box, and Ronaldo remained a constant threat before the break as he hit the crossbar as well as forcing Roma goalkeeper Pau Lopez into a save.

Roma defender Ibanez put through his own net in attempting to intercept a cutback for Ronaldo midway through the second period, giving Juve a decisive second goal. By the end of proceedings Fonseca’s visitors had more possession and a remarkable 13 shots compared to just three registered by the champions.

“If you look at the statistics, we had more shots, more corners, more possession, more passing, but Juventus scored the goals,” Fonseca told Sky Sport Italia. “This is why Ronaldo is the best in the world, because he can score goals like that out of nowhere. We didn’t make a mistake on that goal: it’s just Ronaldo.”

Ronaldo received strong praise across the morning papers on Sunday. Gazzetta dello Sport, Corriere dello Sport and Turin local paper Tuttosport all rated the Seleção star 7.5 and Man of the Match. “Sarri would have paid to have this CR7,” wrote La Gazzetta dello Sport. “Against Roma he played as a classic centre forward, in a system like that one of Portugal made of defence and counter-attack. He is the man of key moments.” 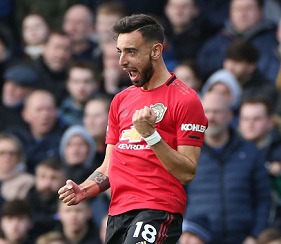 For Bruno Fernandes, what would have been another highly productive outing with Manchester United was ruined by a late concession against Everton. United led 2-0 and 3-2 on the night at Old Trafford, only to let in a 95th-minute equaliser and fall further behind leaders Manchester City at the top of the Premier League.

Fernandes scored United’s second goal on the stroke of half time, picking out the top corner from outside the box with a perfect right-foot shot. However, despite United dominating the vast majority of the match, the visitors – who had André Gomes in midfield – scored with all three of their shots on target and left with a point thanks to in-form striker Dominic Calvert-Lewin.

“The past is the past and you can’t do anything, but in the future you can do something,” Fernandes told MUTV after the setback. “Everyone has to be ready and learn from this game, then put what we have learned from it into the next game [on Tuesday against West Ham] and try to win it because it will be a hard one. And we have to win it.”

The key moments from Saturday's game 🎥

Aris have been one of the surprises of the Greek Super League, finding themselves in second place behind runaway leaders and champions Olympiacos. Aris secured an impressive 2-0 win at AEK Athens on Sunday, with Bruno Gama in midfield and on-loan West Ham striker Xande Silva coming off the bench to grab the second goal in injury time.

In Turkey, there were two more goals for veteran forward Marco Paixão for Altay in the second-tier as they hammered Eskişehirspor 5-0 away from home, while Fábio Martins scored for Al-Shabab in their 4-1 win against Al Raed in the Saudi Pro League. Finally to Switzerland, where former Sporting winger Cristian Ponde scored for promotion-chasing Grasshopper in their 1-1 draw with Chiasso, leaving João Pereira’s side four points off top spot in the Challenge League with two games in-hand.