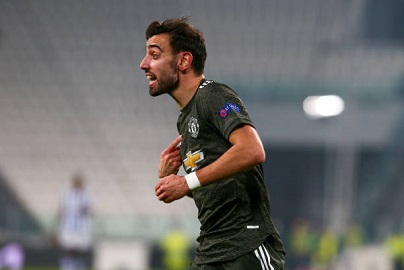 Bruno Fernandes scored twice as Manchester United took a commanding lead in their Europa League tie with Real Sociedad thanks to an impressive victory in Turin. The Portugal midfielder made it five goals in his last four starts with the brace, as United all but booked their place in the next round with a 4-0 win.

Elsewhere, José Mourinho’s Tottenham Hotspur  look set to join United in the last 16 after they beat Austrians Wolfsberger 4-1 in Budapest, while there were also wins for Pedro Martins’ Olympiacos and Luís Castro’s Shakhtar Donetsk on a good night for Portuguese coaches.

With all ties involving travelling British sides moved to neutral venues due to covid-19 border policies, Fernandes was the inspiration for a United win in Italy which for long periods of the game looked less of a formality than the scoreline suggests. The former Sporting man struck in the 27th and 57th minute with typically sharp finishes to put United 2-0 up, after which Marcus Rashford and Daniel James added further goals to give United a hefty first-leg lead at the Juventus Stadium.

“They are one of the worst teams [we could have played] because they’re really good. They play well, they have quality individually and as a team, they have a really good idea of football. Luckily today our mentality was top, we had the right focus. Now the next step is to keep this confidence and keep doing the right things in the next games.

“My own form? I feel good. Most important for me will be the trophies at the end of the season. I know everyone is maybe tired of hearing me say that, but I prefer to not score any more goals for the rest of the season and get trophies. Of course I want to score every game, but at the end of everything it’s the trophies we talk about. At this club we have to win trophies, because it’s not good enough to just be in the competitions and not win.” 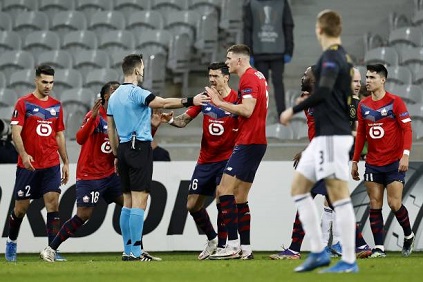 It was a less happy evening for Lille’s Portuguese contingent – and in particular Renato Sanches – as the French side conceded twice late on to lose 2-1 at home against Ajax. Lille were leading the Dutch champions 1-0 with just three minutes of normal time remaining when Sanches was dubiously adjudged to have fouled Nicolas Tagliafico inside the penalty area. After being advised to consult VAR, referee Ivan Kruzliak stuck to his decision and Dusan Tadic converted from the spot.

Within two minutes Ajax had scored again through Brian Brobbey to give them a priceless advantage to take back to Amsterdam, leaving Lille frustrated at the game-changing decision. José Fonte joined Sanches in the starting line-up, while defender Tiago Djaló was an unused substitute, and captain Fonte spoke to the media following the game.

“I think that in the first half we did a good job, especially defensively,” Fonte said. “Our game plan was to counter attack, to be solid and compact and to quickly go forward with our young attack. In the second half we had the same plan and we manage to score. But after that it's difficult to accept the decision of the referee who changed the course of the match. We're going to have a good rest, focus on Lorient, then we will analyse the match to improve things and seek victory in Amsterdam.”

Elsewhere, Rafael Leão and Diogo Dalot came on as second-half substitutes as AC Milan drew 2-2 with Red Star in Belgrade, while there was a surprise win for Spanish side Granada, who beat Napoli 2-0 in Spain. Rui Silva and Domingos Duarte started for the La Liga side and Mário Rui featured at left-back for the visitors. Belgians Antwerp, with former Benfica man Buta in the line-up, took on Scottish side Rangers in France, where they were beaten 4-3 despite twice leading. 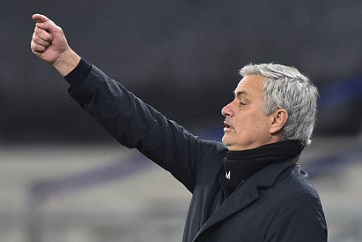 José Mourinho’s Tottenham Hotspur are one of the front-runners for the competition and the Premier League side are all but through after beating Wolfsberger 4-1 in the ‘away’ leg in Budapest. Goals from Hueng-Min Son, Gareth Bale, Lucas Moura and on-loan Benfica striker Carlos Vinicius gave Spurs a comfortable margin to take back to London next week.

“A positive result was not enough, a draw with goals, not the point, we had to come and win, to play with ambition, which we did,” Mourinho said of the win. “The result at half-time, 3-0, is short, it should be more. Good control of the game, lots of chances in lots of situations, the result could be different, and I believe the last goal put almost a period on this tie, because 4-1 away is a very good result.”

On a good evening for Portuguese coaches of foreign sides, Pedro Martins’ Olympiacos beat PSV 4-2 in a game which saw five first-half goals. Martins selected José Sá and Bruma for the Greeks, who led 3-2 at the break and take a reasonable advantage to Eindhoven next week. Finally, Luís Castro’s Shakhtar Donetsk look set to advance after winning 2-0 in Israel against Maccabi Tel Aviv.