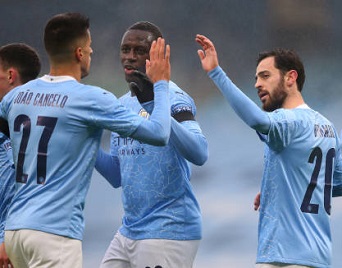 Manchester City took a huge step towards the Champions League quarter finals with victory over Germans Gladbach on Wednesday night, and it was a result driven by their Portuguese connection.

Bernardo Silva scored the opener, assisted by a wonderful cross by João Cancelo, before the same duo combined in the second half, with Bernardo this time nodding the ball across goal for Gabriel Jesus to give Pep Guardiola’s team a significant first-leg advantage.

With Rúben Dias continuing at centre-half, Guardiola selected Cancelo at left-back, where he produced a Man of the Match performance, while Bernardo was deployed in behind Gabriel Jesus in a playmaker role. All three Portuguese played the full ninety minutes, as City racked up their 19th consecutive victory in all competitions.

“It was a good game for us, I think it’s a good win and a very important win as we know how tough this competition is as one mistake can mean that you are out,” Bernardo said after the match.

“Usually I’m not! [deadly with headers]. I try to practice this a lot and I have a competition with Rúben about who can score more headed goals. I think tonight I was lucky that João gave me a great ball. I’m happy to score the goal and help the team.

“João? He’s an amazing player. I played with him for seven years for Benfica and we’re from the same generation. The connection is good.

“He knows my timing and I know how good he is with the ball at his feet. It was a very good goal. His passing qualities and overall as a player he’s having a great season and I’m so happy for him.”

City will be aiming for a remarkable 20th straight win on Saturday when they host West Ham United in the Premier League, with Guardiola appearing to be wary of complacency and describing his team as “not good enough” in taking their chances after the match with Gladbach in Budapest.

The Spaniard did, however, offer kind words for his Portuguese match-winning duo, beginning with the increasingly exceptional Cancelo. “Cancelo is playing very well,” Guardiola said. “He is a player with enormous quality and has amazing physical capacity. He would be ready to play tomorrow, if necessary. For his two assists, you have to have quality to be able to place the ball the way he did. It was perfect.

“[Bernardo] Has been at the level of the first two seasons [at City]. Maybe last season he dropped a little, but whenever he plays he is exceptional, with a lot of quality. He’s very good in the aerial game! I've seen him in training, when you go up to head you have to use your body and he’s strong in that aspect, he’s a good header, to tell you the truth. The goal was fantastic, the way he finished. He has that special quality.”