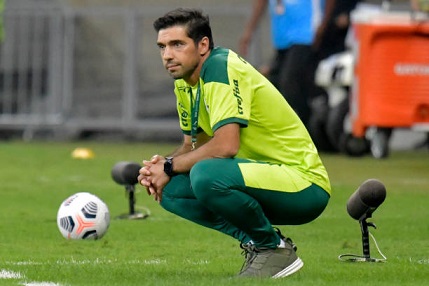 Abel Ferreira will have the opportunity to defend the Copa Libertadores crown after his Palmeiras side reached the final again thanks to an away goals victory over Atletico Mineiro.

Palmeiras and Atletico played out a goalless draw in the first leg in Sao Paulo, during which former Porto striker Hulk missed a penalty for the visitors, but a 1-1 draw in Belo Horizonte means the South American champions will return to next month’s showpiece in Montevideo.

The second leg at Atletico’s Estádio Governador Magalhães Pinto was a tense affair at half time, with neither side making a breakthrough to leave the tie poised at 0-0 after three quarters of action. However, Chilean Eduardo Vargas headed in at the back post six minutes after the re-start, leaving Abel’s side needing an away goal to qualify for the final.

The game began to open up, with Vargas missing a crucial chance to make it 2-0 before Palmeiras twice opened the home side’s defence on the counter attack without taking advantage. The equaliser did arrive midway through the second period, as long-serving attacker Dudu scrambling the ball in from close range after good set-up play by Gabriel Veron.

Palmeiras held on, largely reducing their opponents to efforts from long distance before the final whistle sounded to intense celebration by Abel and his players. Verdão will meet either Brazilian rivals Flamengo or Barcelona of Ecuador in the final in the Uruguayan capital next month, and could become the first team to retain the trophy since Argentine giants Boca Juniors twenty years ago.

Portugal has the best - Abel

“For this calm and intelligence I was inspired by Manchester United-FC Porto,” Abel said after the match. “At Old Trafford they scored a goal at the end to advance. That’s what I told my players, we have to score a goal and we’ll do it. We have an impeccable Libertadores , clean, with merit from my players, hard work and discipline, things that Brazil lacks sometimes.