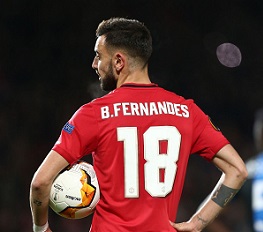 Having signed as the saviour of a side that was ailing badly, the January 2020 arrival of Bruno Fernandes has been a total game-changer. Since he first donned the red shirt, the Portuguese has set about building his own legend at the club. His outstanding play, not to mention his ludicrous goal returns in his two seasons at the club, has fans salivating. However, the arrival of Jadon Sancho and the return of Cristiano Ronaldo has added a few more thousands onto the wage bill. Some fans, then, were worried.

Would Bruno not be given the pay rise he deserves? And might that lead to rumours of interest from the likes of Real Madrid coming true?

Fans, though, can rest easy. All reports within the club and those who are connected suggest that a new long-term deal is in the post for Fernandes. The talisman of the club in the middle of the pitch, his success is going to be utterly essential to United as they build a team that can progress, improve, and grow in both quality and consistency.

Without a trophy since Jose Mourinho was in charge and before his move to AS Roma, United need to become a club that wins again as opposed to a team that merely competes. That means keeping top players happy and handing them the kind of contracts that is relative to the value they bring to the team.

With that in mind, then, talk of a new contract for United should be highly exciting. Being able to get a player like Fernandes signed up again for the long-term can only be a positive as things change around him. With more big signings expected in the future, though, tying up Fernandes should become a priority ahead of anything else.

How long will Bruno Fernandes’ new contract be?

It is expected that the club will agree a five-year deal with Fernandes, tying up the 27-year-old into his early 30s. If things develop at Old Trafford as expected, the player would see out all five of those years and become a modern legend at the club.

At the moment, the player earns around £150,000 per week, according to reports. United are keen to boost that up to £250,000 or beyond, giving the player a bumper wage rise of around £5m per year. However, that would not make him the highest earner at United – it would actually only put him close to the top five biggest earners.

Fans worried that such a disparity might put Fernandes’ nose out of joint, though, should not be worried. If terms are agreed as reported, then the club have just picked up one of the best players in their modern history on a contract that is completely in line with what he brings to the field of play.

A fantastic talent with no shortage of ability, Fernandes is essential to the medium-term future of the club. Signing him up on a new deal and pairing him with a Portuguese footballing idol can benefit both player and club. To follow how Bruno adapts and get more related information visit the PunterDairy website and other best football websites listed on our partner site.