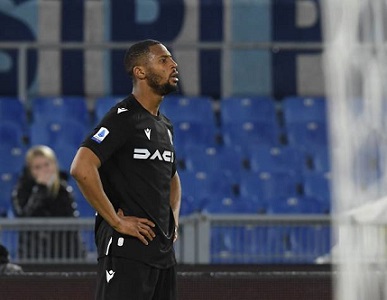 Portuguese striker Beto scored a superb early brace as Lazio and Udinese played out an extraordinary eight-goal thriller in the Italian capital on Thursday night.

Beto demonstrated great variation in his attributes to put Udinese two goals up early on at the Stadio Olimpico. His first was a clinical header from Mato Jajalo’s cross on 17 minutes, before the forward raced away from the Lazio defence and showed flawless composure in rounding goalkeeper Pepe Reina for his second on 32 minutes.

Ciro Immobile immediately halved the deficit for Lazio and the teams would go on to share the spoils in a memorable 4-4- draw. But the goalscoring instincts of former Portimonense striker Beto since his move to Italy continue to be a source of great encouragement for Seleção fans ahead of the World Cup play-offs in March.

Beto joined Udinese on a loan deal with an obligation to buy worth around €10m in the summer, since when he has scored six goals from ten starts in Serie A. The 23-year-old’s quick adaptation to Italian football sees him joint 6th in the goalscoring charts, despite his side struggling in the bottom third of the table.

Fernando Santos is sure to be keeping a close eye on the Lisbon-born striker over the coming months to see if he can maintain his goalscoring habits in Italy. Portugal meet Turkey on 22 March for their semi-final clash, which if successful would lead to a final against Italy or North Macedonia five days later for a place at World Cup 2022.