Portugal slip up against Argentina 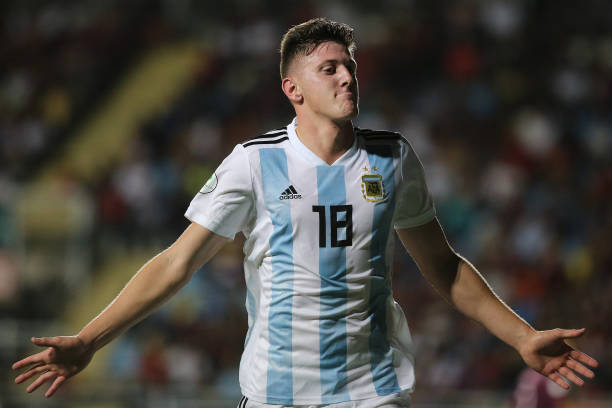 Argentina now have a firm grip of Portugal’s Group F in the U20 World Cup after a 2-0 win in Bielso-Biala, Poland.

Portugal will rue some missed chances as Adolfo Gaich and Nuhuén Pérez goals gave Argentina an important win, although the performance of goalkeeper Manuel Roffo was more important in denying Portugal.

Portugal now need a win over South Africa to guarantee their progression into the knockout stages.

Hélio Sousa fielded an unchanged Seleção side from the one that beat South Korea in the opening game. Fernando Batista’s Argentina made a few changes to the team that beat South Africa 5-2 in their opener, notably Adolfo Gaich coming in for Pedro De la Vega up front.

The first chance of the game came to Portugal when Benfica’s Jota found Rafael Leão on the left wing. The Lille forward did well to work the ball into the box but his shot was straight at goalkeeper Manuel Roffo.

A minute later Gedson Fernandes had a shot from outside the area that went just wide of Roffo’s right-hand post. The ever-lively Jota forced another good save from Roffo a few minutes later as Hélio Sousa’s side started to look dangerous.

Despite being the better of the two sides Portugal fell behind just after the half-hour mark. A long ball forward was nodded on to Julián Álvarez, who managed to find Adolfo Gaich to squeeze the ball past João Virgínia from close range.

Argentina went into half-time in the lead but Portugal had had the best of the chances. Portugal almost pulled level just after the interval when Rúben Vinagre’s cross-shot could neither find the corner of the net nor the extended foot of Rafael Leão.

#U20WC Disappointing 2-0 defeat for Portugal who were not clinical enough in front of goal. Sound familiar? Not all is lost however, Helio Sousa's side can still go all the way in Poland. Keep the faith. pic.twitter.com/s1YVrnbSqE

Argentina then nearly doubled their lead minutes later when a fantastic strike from Newell’s midfielder Anibal Moura slammed the outside of Virgínia’s post.

Portugal kept trying to find the equaliser. Jota forced yet another fine save from Boca Juniors goalkeeper Roffo, who was in fine form, and Rúben Vinagre was unlucky to have a good chance go over the bar.

João Virgínia kept Portugal in the game when Adolfo Gaich found himself through on goal, the Everton goalkeeper did well to get down low and prevent a certain goal after 77 minutes played.

Those wasted chances came back to haunt Portugal when Argentina got their second goal after defender Nehuén Pérez scored from point blank range after a free kick, albeit after almost two minutes of VAR deliberation as to whether or not the Atlético de Madrid man was offside at the time.

Portugal looked deflated after the goal and it was almost made worse when the impressive Gaich was again free in behind the Portugal defence to put the ball in the back of the next but this time the offside flag had been raised.

It will be a wake-up call for Portugal to face a side as clinical as this Argentina after failing to make more of their chances against South Korea. Should Portugal progress, which is still very likely, there are some definite lessons to be learned for the knockout stages for Hélio Sousa’s team.