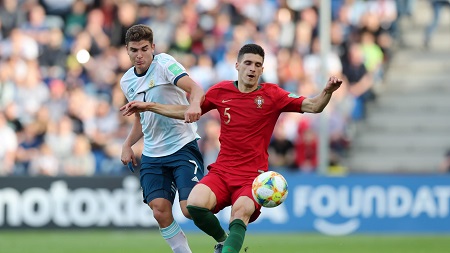 Seleção look to bounce back after Argentina loss

Portugal’s U20 World Cup campaign suffered a setback after a 2-0 defeat against Argentina in Bielsko-Biala. The Seleção failed to take their chances and could need a result against South Africa to advance to the round of 16.

Hélio Sousa stuck with the same starting side that won 1-0 against South Korea, he might make some changes in Portugal’s final Group F match. Few are taking South Africa seriously, but that would be an error as the Amajita have matched it with Argentina and South Korea despite coming away with consecutive defeats.

Portugal got into the game and looked the better team before Adolfo Gaich scored with Argentina’s only shot on target in the first half. Rafael Leão and Jota continued to be the main threats but couldn’t find a way past Argentina goalkeeper Manuel Roffo.

Hélio Sousa’s side continued to be wasteful before suffering a sucker punch from a free kick. It was a disappointing result but could be the wake-up call Sousa and some of his players require in order to go all the way in Poland.

Florentino Luís has been playing at the base of a three-man midfield with Gedson Fernandes and Miguel Luis attempting to play box to box roles. They lost control in the second half against South Korea which was characterised by some wayward passing, Florentino’s hospital pass against Argentina allowing Barco into the box that almost resulted in a penalty.

I think the balance and chemistry between those three is lacking and Sousa may look to make a change to give Portugal more attacking threat. One way to do that might be switching to a 4-2-3-1 or formation and introducing another attacker into the mix.

Mesaque Dju made some promising runs against Argentina after replacing Francisco Trincão and Pedro Neto has come off the bench in both of Portugal’s two matches in Poland. Both players are technically wingers, but could be accommodated with Jota or Trincão moving into an attacking midfield role or up front alongside Leão. 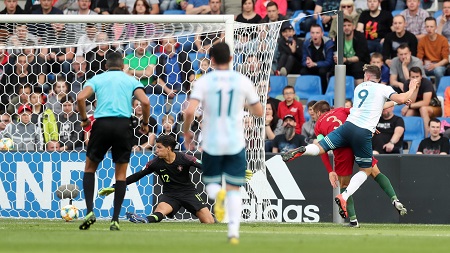 It’s amazing how the DNA of many nations can be evident across different eras and different age groups. Think of the ‘defensive’ Italians or the ‘flair’ that characterises the Brazilians.

It might simply be a coincidence, but there appears to be a familiarity between Fernando Santos’s side in recent times and what we have seen from Hélio Sousa’s youngsters.

No need to panic

Portugal’s 2018 U19 European Championship campaign began exactly the same way as the 2019 U20 World Cup, a win in their opening match against Norway before defeat against Italy. They then went on to beat Finland and Ukraine and got their revenge against the Italians in the final, a 4-3 victory in extra time securing the trophy in dramatic fashion.

Portugal famously got off to a slow start at the 2016 European Championship, drawing their first three matches before defeating Croatia, Poland, Wales and France on their way to a historic triumph. Fernando Santos found a winning formula by introducing Cédric Soares, Adrien Silva and  Renato Sanches into the mix and never looked back.

Few are giving Thabo Senong’s side a chance against Portugal but South Africa have shown an ability to match it with Argentina and South Korea. Amajita were undone by two VAR decisions in three minutes that saw them trail 2-1 and Keenan Phillips sent off before Argentina ran away with a 5-2 win.

Ajax Amsterdam winger Leo Thethani came off the bench and won a penalty that Monaco striker Lyle Foster converted. Thethani’s performance off the bench earned him a start against South Korea, he could retain his spot while wingers Promise Mkhuma and Kobamelo Kodisang were dangerous against Argentina and have the potential to trouble Portugal.

South Africa on top in the first half against South Korea, creating plenty of chances but unable to make it count. They fell away in the second half and were unable to get back in the game after falling behind in the 69th minute.

World Cup is a marathon

Jota was naturally disappointed with the result but knows that Portugal have the quality to go all the way. “We are obviously not happy with the result because we lost and we are a national team that always wants to win, but this is football, we have to recharge our batteries and win the next game.”

“The next game is going to be very important in our marathon here at the World Cup and hopefully we can win and get to the next stage. We know our value and we are not happy with the result. We are going to rest, think, see what we did well and did wrong.”

The Benfica youngster speaks eloquently and has a maturity that will go a long way to ensuring a long and successful career. “The finishing was not there, if people who understand football saw this game they will see we were a very good team, unfortunately we didn’t score and football is about scoring goals.”