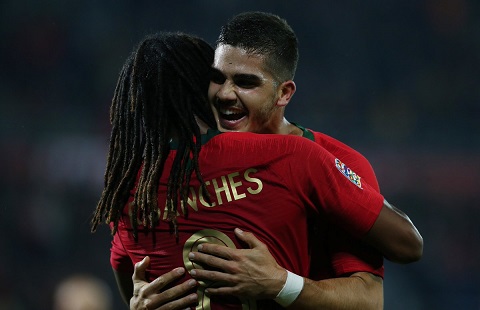 On Thursday the Portugal squad that will defend its European Championship crown congregated at FPF headquarters, Cidade do Futebol, in Oeiras on the outskirts of Lisbon.

To be more precise, 21 of the 26-man squad reported for duty. Manchester City trio Rúben Dias, Bernardo Silva and João Cancelo will arrive later next week as they play the Champions League final tonight in Porto, and Bruno Fernandes was also given extra time off after only finishing his club season in Wednesday’s Europa League final. Gonçalo Guedes, meanwhile, is in isolation having tested positive for Covid-19 in Valencia, and will only join the squad when given the all-clear.

Every day one player is presented to the media to answer questions. Gauging from the press conferences so far and the training sessions open to journalists, the mood is positive going in the tournament. PortuGOAL summarises the quotes given by André Silva, João Félix and Renato Sanches.

“I’ve been a Portugal player for five years and I always felt the atmosphere was good. The team’s in good spirits, motivated and ready for the training camp.

“I arrive here motivated and confident after the season I had, which I am proud of and which gives me maximum confidence to help the Seleção.

“I think it’s the best moment of my career both mentally and physically. The fact I avoided setbacks, injuries and so on this year allowed me to reach a higher level, to improve and now I feel able to help the Seleção more.”

“It was great winning the championship (La Liga), it’s what every player wants. But now we have to forget about our club sides and focus on the Seleção, with a different squad. But this Seleção has the “chip” of winners. We have players who have won everything, we all have this chip.

“I’m not worried about the criticism I get. As I appeared when I was very young, I’m used to it. I’m indifferent to it, but of course I listen to criticism. I take note of what I believe is constructive criticism; the rest I ignore. I’m perfectly aware what I can do and what I’m capable of.

“Are we in a “group of death”? It’s a tough group, although all matches in a European Championship are tough. The game against Hungary may be more difficult  than the game against Germany, you just don’t know.

“All the matches will be tough and we’re working hard to give a good response. All the other teams know we are a strong side and will want to see us out of the tournament as soon as possible, but we’re going to play our football.”

“The main differences between me now and at Euro 2016? I feel I’m a better player, with more ability, more experience and this is normal because the years pass by and players have to develop. I feel ready to play more.

“When I moved to Lille the idea was not to win the French championship, but to play more. It was an enticing project. Of course PSG is the big favourite, but this year a lot of the favourites didn’t win their leagues, like in Portugal, Spain, France. It’s always a great feeling to win the championship. It opens up the door to other opportunities.

“Pote and Nuno Mendes? They are very calm personalities and it’s always important to have new players in the team. If they are here it’s because they deserve it. They played a great season with Sporting, and won the league.

“I wouldn’t call our group a “group of death”. They are all great teams. It’s a good group, where we can have a positive first phase and win our games. Any team that is at the European Championship can beat any opponent.”