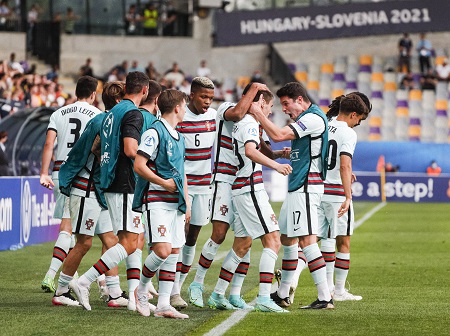 Portugal take on Germany in the 2021 European U21 Championship final on Sunday. The match will be played at 8pm BST at Stadion Stožice in Ljubljana, Slovenia.

Rui Jorge’s side have a chance to create history and be the first Portuguese side to the tournament after being runners-up on two occasions.

PortuGOAL’s Matthew Marshall has been following the Esperanças in Slovenia and breaks down their run to the final, the team, Germany and their chances of winning that elusive title.

Road to the final

Portugal won nine of 10 matches in the qualification stage, the only blip being a 4-2 defeat to Netherlands in Doetinchem were they conceded two late goals.

Fábio Vieira was top scorer in the qualifiers with five goals, Dany Mota scoring four with Diogo Queirós and Jota both scoring three.

Rui Jorge’s side cruised the group stage without conceding a goal. They beat Croatia 1-0 with Fábio Vieira scoring the winner and beat England 2-0 with Dany Mota and Trincão on target.

Portugal rounded it off with a 3-0 win against Switzerland, goals to Diogo Queirós, Trincão and Francisco Conceição getting it done in Ljubljana.

The Esperanças got past Italy in the quarter-finals. Dany Mota scored twice to establish a 2-0 lead and Gonçalo Ramos made it 3-1, but Italy fought back to take it to extra time.

Matteo Lovato was sent off in the 91st minute and Portugal took advantage with goals to Jota and Conceição securing a 5-3 victory.

Portugal had to suffer for long spells in the semi-finals against Spain, they were second best for much of the contest but emerged with a 1-0 win. Jorge Cuenca turned Fábio Vieira’s cross into his own net in the 80th minute.

Portugal have been runners-up twice at the European U21 Championship. Jorge Costa, Rui Costa, João Pinto and Luís Figo started against Italy in the 1994 final, going down 1-0 in extra time.

The Esperanças reached the final again in 2015 under the guidance of Rui Jorge. They were expected to beat Sweden with a starting side including Raphael Guerreiro, Ricardo Pereira, William Carvalho, Sérgio Oliveira, João Mário and Bernardo Silva, but couldn’t score in 120 minutes and lost the penalty shootout.

Losing Thierry Correia and Trincão on the eve of the knockout rounds was a blow with both players guaranteed starters. Pedro Gonçalves’ call up to Portugal’s senior side robbed the U21 side of another important player.

Daniel Bragança overtook Florentino Luís for the holding midfield role, but it wouldn’t be a stretch to suggest Jorge could start both against Germany with the defence needing more protection than they were offered against Spain.

Jorge altered the tactics slightly in the group stage, basically in an attempt to accommodate Trincão and Fábio Vieira in the starting side. He has moved away from two wingers with Vieira operating behind two forwards. We could see him revert to two wingers against Germany.

Why Portugal can win

Portugal’s defence has stood up on numerous occasions, keeping three consecutive clean sheets in the group stage and shutting out a talented Spain squad in the semi-finals. Abdu Conté replaced Tomás Tavares at left back to offer more solidity and Diogo Leite was immense in Maribor.

Rui Jorge have a number of players that can produce a piece of magic to win any game. The main sources of creativity are Vitinha and Fábio Vieira while Jorge has a range of attacking weapons at his disposal in Jota, Francisco Conceição, Rafael Leão, Tiago Tomás, Dany Mota and Gonçalo Ramos.

Portugal have played three matches at Stadion Stožice that have all ended in victory. They beat England, Switzerland and Italy in Ljubljana and those positive vibes could be a factor against a German side that have played all their group stage and knockout matches in Hungary.

Vitinha praised the team spirit after the victory against Spain, highlighting Portugal’s ability to emerge victorious despite suffering psychologically and physically on the pitch.

Portugal have faced Germany three times at the European U21 Championship and won every encounter.

Portugal took on Germany in the 2015 semi-finals and recorded a thumping 5-0 win. Bernardo Silva, Ricardo Pereira, Ivan Cavaleiro, João Mário and Ricardo Horta were all on target in Olomouc.

Germany have won the European U21 Championship title twice. They beat England 4-0 in the 2009 final and beat Spain 1-0 in the 2017 final. This is their third straight final appearance after losing 2-1 to Spain in the 2019 showpiece.

Germany won their qualifying group despite losing two matches against Belgium. They were far from convincing in the group stage, beating Hungary 3-0 before a 1-1 draw against Netherlands and 0-0 draw against Romania, advancing to the knockout rounds on goal difference.

Stefan Kuntz’s side got past Denmark in the quarter-finals. They were going out before Lukas Nmecha made it 1-1 in the 88th minute, Jonathan Burkardt putting them in front in extra time before conceding a penalty that made it 2-2.

Burkardt missed Germany’s first spot kick, but Germany were perfect from that moment and won 8-7 in the shootout.

Germany got off to the best possible start against Netherlands in the semi-finals. Florian Wirtz scored twice in the opening 8 minutes and they secured a 2-1 victory in a match where Mërgim Berisha hit the woodwork on three occasions.

Wirtz is the obvious danger man, the 18-year-old already making 47 appearances for Bayer Leverkusen and following in the footsteps of Kai Havertz. Arne Maier is the captain and lynchpin in midfield while Ridle Baku is a weapon on their right flank. Berisha will need to be paid attention after going desperatlely close on three occasions against Netherlands.

That will be determined by the football Gods, but I think Portuguese supporters have every reason to abandon the saudade and embrace some confidence.

Portugal arguably have a stronger defence and midfield, and if Rui Jorge makes the right moves and they play to their potential, there is absolutely no reason they can’t win.