Draw with France sees Portugal through to round of Last 16 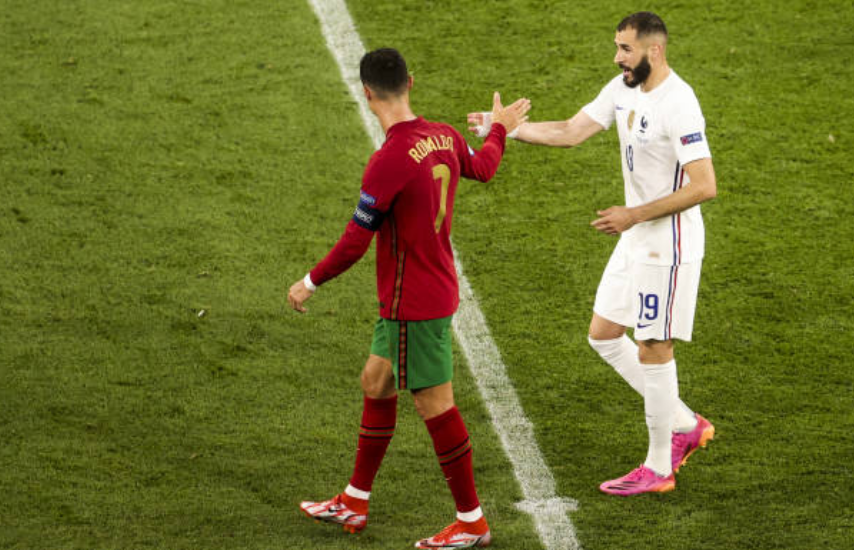 Portugal have made it through the round of last 16 of the European Championships after a Cristiano Ronaldo brace earned the Seleção a 2-2 draw and a third-placed finish in Group F.

Ronaldo placed Portugal ahead with a first-half spot-kick, meanwhile Hungary led Germany by a goal in the opposing game, but a couple of efforts from Karim Benzema either side of the half-time whistle had Fernando Santos' men facing elimination, momentarily, with France 2-1 up.

Portugal's skipper, Ronaldo, fired back with a second penalty in the 59th minute, however, to make it 2-2 before Germany took a draw from their game against Hungary in Munich, following the European and World Champions out of the group and into the next round of the tournament.

Ahead of the decisive night, the big changes for the Seleção came in midfield as Fernando Santos called on João Moutinho and Renato Sanches to take over from the thus far uninspired Bruno Fernandes and William Carvalho.

Early signs were promising for Portugal with Sanches picking out Ronaldo with a cross for the latter to attack with his head, five minutes in, but the first real chance fell to the World Cup holders ten minutes later, as Paul Pogba and Kylian Mbappé combined prior to Rui Patrício’s save against the Paris Saint-Germain forward.

Portugal‘s moment under the lights came a little before the half-hour mark after Moutinho’s free-kick delivery was met with a sweeping punch by Hugo Lloris, cleaning Danilo Pereira in the air for a 30th-minute penalty.

No prizes for guessing just who placed himself on the end of the Seleção’s spot-kick, with Ronaldo converting from the 12-yard-mark and notching his third goal of the tournament. France wouldn’t end the half without a penalty of their own, however, after a coming together between Mbappé and Nélson Semedo allowed Benzema to make it 1-1.

The Real Madrid striker made himself known just two minutes into the second half, bending a run in behind the Portugal defence before beating Patrício and an initial offside call to place France ahead, with Hungary’s lead against Germany placing Ronaldo & co. in jeopardy.

More twists were in store en route to the hour mark and it was Ronaldo, again from the spot in the 59th minute, making it 2-2 with his 109th international goal after Jules Koundé’s handball inside the box.

France quickly reminded Portugal just how tender their position was in the group with a threading strike from range by Pogba, being tipped onto the post by Patrício, who'd also keep Antoine Griezmann out from the follow-up in the 68th minute.

With Germany back level against Hungary in Munich, Portugal and France sat on a result that would see both of them proceed with a 2-2 draw at full-time, pinning the Seleção up against Belgium in the next round, this Sunday.