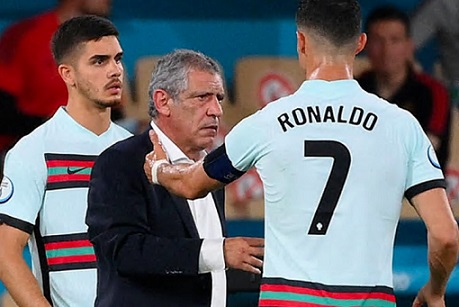 Just like in the 2018 World Cup, Portugal’s participation in the big summer football bonanza finishes with a frustrating round-of-16 exit.

Unlike in Russia though, there was a palpable sense that the Seleção deserved more than they got, but ultimately they were unable to recover from Thorgan Hazard’s first-half goal. Having ousted reigning champions Portugal, Belgium will be confident of going all the way and backing them at Free Bets now looks an enticing prospect.

“They scored, we didn’t,” was one of Fernando Santos’ simple but succint comments after the match, while several players lamented Portugal’s lack of luck. PortuGOAL rounds up the reactions from Seville.

“It’s a huge disappointment because we believed we could win the tournament like in 2016. There are players crying in the changing room. They gave it everything. Belgium had 6 shots, scored from one, we had 29, hit the post. But a defeat is a defeat. I sincerely don’t have much to say. It’s not a question of justice or injustice. They scored a goal, we didn’t.

“We have to lift our heads because we played a tremendous game. The ball hit the post – it didn’t want to go in. The players gave everything. Portugal deserved to win and that’s why we are sad.

“We tried everything. We tried attacking from wide, from inside, putting more men in the box, but the ball hit the post, from another chance the ball went straight at their goalkeeper. That’s football, there’s nothing you can do about it.

“In 2018 we were knocked out of the World Cup in the last-16 and the year after we won the Nations League. We have to look ahead to go and win the World Cup.”

“I wouldn’t say our game plan failed. I’d actually say the game plan made us comfortable and feel superior on the pitch. We were always close to scoring. Even in the first half in an extremely tight game. They scored from one shot in the first half, when they had a bit of luck because of the strange way the ball moved.

“We were close to scoring several times, but the ball didn’t want to go in for us. The only thing to take from this game is that it’s a lesson to come back stronger. The second half was all ours. The result just didn’t go for us. Thank you to the Portuguese for all the fantastic support.”

“We had very good moments when we managed to pass the ball in the attacking third. I think we needed to create more danger. When we managed to, we hit the post. Belgium scored a goal which gave them a big boost, and they defended well.

“We weren’t expecting to get knocked out so early in the competition. We tried our best to equalise as you saw at the end of the game. We weren’t effective and we were unlucky with hitting the post. It’s tough going out like this in the last 16. We could have gone further. Life goes on. Now we have to think about the World cup and qualifying.”

“We created more chances than Belgium. In the first half we managed to control the game well. I can’t remember any other chance for Belgium apart from the goal which was like pulling a rabbit out of the hat. There you have it. It’s with a lot of bad luck that we’re going back to Portugal. In the second half we knew we had to give it everything. We had clear chances to score but we didn’t manage to. Belgium had that bit of luck.

“Although we are a small country, we have a lot of quality in all areas. Football is no different. The fact we have been European champions and won the Nations League translates the value of this team. You can’t always win. We fought to the end and gave it our all. Today we lacked a bit of luck. A victory for us would have been completely fair.”

“In the first half we played very well, controlled the game and scored a great goal. In the second half Portugal took the initiative, attacked us and we had to show maximum commitment. We never lost concentration, despite Portugal pushing hard at the end for the draw. I couldn’t be prouder of my players.

“It was the toughest test we’ve had at this European Championship. We weren’t as good as we could have been but Portugal have an incredible team.”