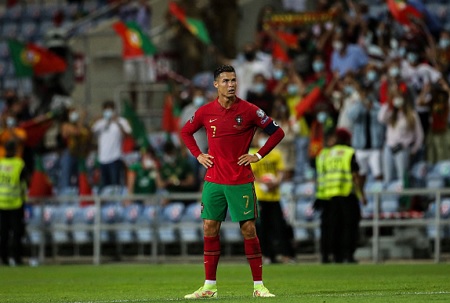 Portugal beat Republic of Ireland 2-1 in the FIFA World Cup qualifiers at Estádio Algarve. Cristiano Ronaldo saw an early penalty saved as the visitors took a half-time lead, and when all seemed lost Portugal’s talisman stepped up with two late headers.

Ronaldo finally eclipsed Iran's Ali Daei as the highest goalscorer in international football, taking his tally to 111 goals in 180 internationals.

Portugal dominated possession in the early stages but found it tough to get past Republic of Ireland’s deep lying defence. They were given a golden opportunity to take the lead in the 15th minute.

The visitors unsuccessfully tried to play out from the back, Jeffrey Hendrick taking down Bruno Fernandes with referee Matej Jug pointing to the spot. There was a delay due to a VAR intervention, Gavin Bazunu timing his leap to perfection as he dived to his right to save Ronaldo’s spot kick.

The Boys in Green began to exert some pressure, but the most they could muster was an Aaron Connolly shot that sailed high and wide.

Portugal should have taken the lead in the 27th minute, João Cancelo’s cross finding Diogo Jota whose header hit the post from point blank range.

Bruno Fernandes shot over the bar before Ireland threatened once more, but once again all they had to show for it was a wayward shot from Connolly.

Josh Cullen released Connolly who raced in on goal, Rui Patrício coming off his line to smother the shot and concede a corner from which Ireland went ahead.

Jamie McGrath's delivery found John Egan, the Sheffield United defender getting between Cancelo and Ronaldo to head past Patrício.

Diogo Jota had two opportunities to equalise before the break, testing Bazunu with a low shot before firing wide after being released by Pepe.

Rafa Silva made way for André Silva at the break and the Leipzig striker made an immediate impact by helping his side win a succession of corners. 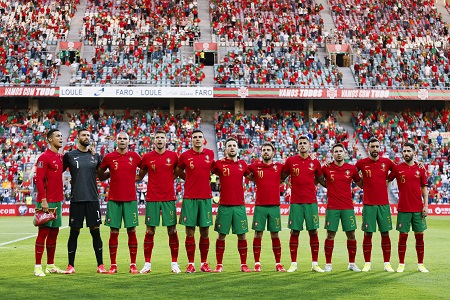 Raphaël Guerreiro’s shot was headed away by Shane Duffy and Bruno Fernandes shot wide as Portugal stepped on the gas. The visitors’ intentions were clear when Matt Doherty was booked for time wasting in the 56th minute.

Bernardo Silva saw a shot deflected over the bar before João Moutinho replaced João Palhinha in the 73rd minute. Minutes later it seemed certain Portugal would equalise, Ronaldo’s cross finding Bernardo who stepped inside Matt Doherty before firing over from close range.

Gonçalo Guedes replaced João Cancelo in the 82nd minute with time rapidly running out. Ronaldo shot over from distance, João Mário saw his shot blocked before Ronaldo’s free kick was saved by Bazunu.

It all seemed lost for Fernando Santos and his side but Ronaldo was far from finished. Guedes’ cross found Portugal’s talisman who rose high and headed past Bazunu. Jota fired over the bar and João Mário’s deflected shot was saved, but Ronaldo rose high head home Mario’s cross and send the crowd into ecstasy.