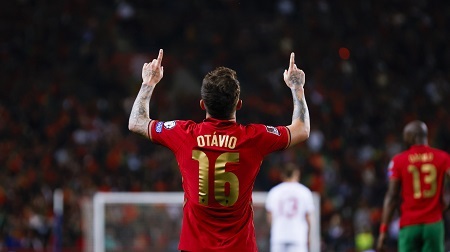 Portugal’s World Cup hopes remain alive after a tense 3-1 victory against Turkey at Estádio Do Dragão.

Otávio was involved in both goals as Portugal established a 2-0 lead at the break, converting from close range after Bernardo Silva’s shot hit the post and delivering a pinpoint cross that was headed home by Diogo Jota.

Fernando Santos’ side refused to coast to the finish line however, Turkey getting back into the contest in the 65th minute when Burak Yilmaz converted from close range.

Yilmaz had a chance to equalise from the penalty spot in the 82nd minute, but he fired way over the bar with Matheus Nunes sealing the deal for the Seleção in added time.

Portugal will take on North Macedonia on Tuesday, the winner booking their ticket to the 2022 FIFA World Cup in Qatar.

The Seleção will start that match heavy favourites to make it to their sixth successive World Cup, but the fact that North Macedonia have beaten both Germany and Italy in qualifying shows the danger of underestimating the opposition.

Portugal on top in Porto

There were some surprises in Portugal’s starting side as Fernando Santos gave Porto duo Diogo Costa and Otávio their first competitive starts. Diogo Jota started up front alongside Ronaldo with José Fonte next to Danilo in central defence, João Moutinho occupying the defensive midfield role.

Diogo Dalot was heavily involved early on with his opposite number Berkan Kutlu lacking confidence in an unfamiliar position. Dalot’s first cross was cleared, his second picking out an unmarked Ronaldo who fired over the bar.

Kutlu was looking like a liability, giving away a free kick after he dawdled on the ball and was robbed by Otávio. Bruno Fernandes’ delivery found Diogo Jota, but somehow the Liverpool forward fired over the bar from point blank range.

Portugal’s persistence paid off and they deservedly took the lead in the 15th minute. Bernardo Silva's shot was pushed on to the post by Ugurcan Çakir, Otávio fastest to react and squeezing the ball home from a tight angle.

Kutlu headed wide from close range after some nice play between Cengiz Ünder and Muhammed Aktürkoglu, but most of Turkey’s chances were coming through cheap turnovers from the Seleção. Their best chance fell to Orkun Kökcü who forced a save from Costa.

Otávio on fire at the Dragão

Portugal extended their lead in the 42nd minute, a free flowing move that began when Ronaldo released Otávio down the right wing. The ball was recycled back to Otávio who had time to pick out Diogo Jota who headed powerfully past Çakir.

Portugal started the second half with more dominance. Bernardo forced a save from Çakir and Jota fired over the bar after Çakir got stranded in no man’s land. Jota had another chance when his shot bounced over the bar as Turkey’s inability to create opportunities from open play continued.

Related: Portugal 3-1 Turkey match reaction: “It was undisputedly a deserved victory for Portugal”

Turkey turn it around

The game took a dramatic turn in the 65th minute when the visitors got back into the contest. It was a simple 1-2 between Burak Yilmaz and Cengiz Ünder, Yilmaz getting behind José Fonte and beating Diogo Costa from close range.

Stefan Kuntz brought Enes Ünal on for Aktürkoglu as Turkey enjoyed their best spell of the game, dominating possession and playing with confidence. Fonte’s poor header allowed Yilmaz to break free as Portugal were looking tentative, increasingly retreating into their own half which brought the pain of the Serbia performance back to the forefront.

Yilmaz went down in a tussle with Danilo but no penalty was forthcoming. Santos made his first substitution in the 71st minute when João Félix replaced Diogo Jota, Guerreiro’s cross headed wide by Otávio before William replaced Bruno Fernandes.

The tide had turned however, and in the 82nd minute Turkey had a golden chance to equalise after Fonte fouled Ünal and referee Daniel Siebert awarded a penalty following a VAR intervention. Yilmaz stepped up skied it over the bar to the delight and relief of the home crowd.

Santos made a triple switch with Nuno Mendes, Matheus Nunes and Rafael Leão coming on for Raphaël Guerreiro, João Moutinho and Otávio.

Two of them combined to seal the deal in added time, Leão racing clear and releasing Nunes who held his nerve and made no mistake. There was still time for one more chance, Ronaldo hitting the bar after Félix’s shot was saved, but it was job done as Portugal reached the final.

Fernando Santos sprung two surprises with Diogo Costa and Otávio making their first competitive starts for Portugal. I said after the 2021 U21 European Championship that Costa was the obvious candidate to be Rui Patrício’s successor, but I didn’t expect it to come this soon.

Otávio’s work rate, mobility, tenacity and aggression were all on display in front of his home crowd. Santos’ tactics were reminiscent of Euro 2016, and it therefore made sense to start the Brazilian born midfielder who justified the decision with a goal, assist and solid performance across the pitch.

João Moutinho deserves a lot of credit for adapting to a deeper midfield role. Many might have thought the 35-year-old was over the hill, but he continues to compete in the Premier League and proved he belongs in Santos’ squad.

You don’t earn 143 caps without being a top-quality player, and it's a joy to continue watching Moutinho play the beautiful game. His experience, professionalism and passing ability will all be invaluable as Portugal start planning for North Macedonia.

Cristiano Ronaldo struggled to make an impact on the game, one of his most subdued performances for the Seleção. It seemed unnecessary for him to play the full 90 minutes with speedsters Gonçalo Guedes and Rafael Leão waiting to come off the bench.

CR7 was still influential in the build up to Portugal’s second goal and went close to scoring in the closing stages, but it seemed like a late substitution would have benefitted the team as Turkey’s desperation provided Portugal with counter attacking opportunities.

Defence gets through, just...

Pepe’s forced withdrawl and Rúben Dias’ injury meant Santos predictably started José Fonte next to Danilo in central defence. Danilo had some nervy moments early on before settling into the game, but the second half showed why he and Fonte are backup options in the heart of defence.

Fonte was largely at fault for Turkey’s goal, the start of a nervy spell for the 38-year-old that culminated in him giving away a penalty. Danilo went close to giving away a penalty of his own as Yilmaz came alive, and there is no doubt that Portugal’s defence will be far stronger if Pepe can recover for the final.

🇵🇹⚽️🦃 Portugal refuse to do anything the easy way, unbale to cruise home after establishing a 2-0 half time lead. Yilmaz got one back before missing the chance to equalise from the penalty spot. Match report for @PortuGoal1