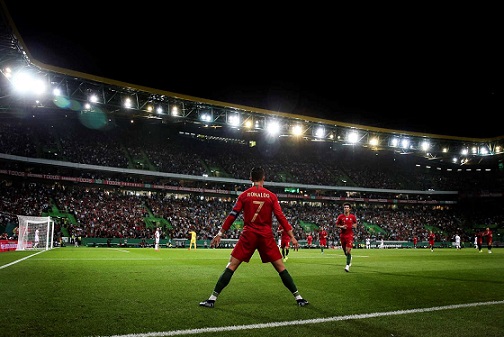 The Seleção are back in action on Sunday evening as they welcome Switzerland to Lisbon in their second Nations League match.

Portugal are coming off a 1-1 draw in Spain, while Switzerland are in need of points after losing their opener 2-1 in the Czech Republic.

Porto midfielder Vitinha has recovered from Covid-19 and Fernando Santos has his full complement of 26 players to select from.

Last week Santos said there would be heavy rotation given the 4-match schedule in 11 days, and the line-up he sent out against Spain showed he would be making full use of the squad.

The biggest surprise was the fact Cristiano Ronaldo started on the bench. It was the first time the Seleçao captain had begun a competitive Portugal game on the bench for five years.

The Manchester United man will almost certainly return to the starting XI having played only the final half hour in Spain. If so, Ronaldo will step out again at the home of the team where his professional football journey began, Sporting Clube de Portugal, with the Alvalade stadium sold out for the occasion.

“All 26 players I have here are available to play and I have full confidence in every one of them,” said Santos. “Managing the minutes of the players will not involve swapping the entire starting line-up. Of course, there will be changes, both in the starting eleven and during the game. Not all the players are in the same physical shape.”

“Some have played more; some have had less recovery time. Some players finished their league three weeks ago and have had 10 days of holiday, others have had less rest. All of this will be taken into account. Luckily, Portugal have extremely high-quality players. Whoever plays, we will keep up our level.”

The Seleção Podcast: The lowdown on Switzerland

Although the result in Seville was encouraging, the performance was hardly inspiring and drew criticism in the Portuguese press and among fans, with the Seleção dominated by the Spaniards for the majority of the 90 minutes.

Santos and his squad will be looking at the two home games this week against Switzerland and the Czech Republic with a view to building confidence as the number of matches left before the World Cup starts to dwindle. In terms of the Nations League tournament, two victories could put Portugal in a strong position with Spain playing two matches away (against the same opponents) this week.

A huge day of live action ahead on Premier Sports 👇 pic.twitter.com/0y3citDthu

Portugal have a mixed record against Switzerland, winning 8, losing 10 and drawing 5 of the 23 meetings between the two nations. The most recent matches bring back good memories for the Seleção, however, with a 2-0 win in 2017 in Lisbon booking Portugal’s place at the Russia World Cup, and a 3-1 victory in Porto two years later in the semi-final of the inaugural Nations League tournament, which Portugal went on to win.

“I watched Portugal’s match in Spain and they are a great team, but we look forward to facing such teams. Portugal are favourites, for sure. It’s up to us to create opportunities and correct the defensive problems we showed against the Czech Republic.”