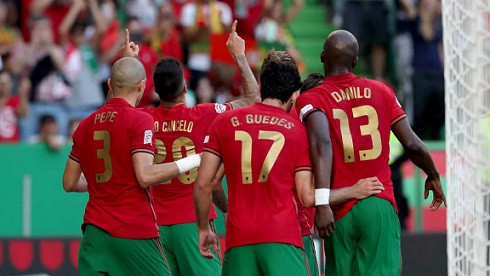 What a difference a week makes! As a disjointed Portugal made heavy weather of World Cup qualifying, then were largely dominated by Spain in the Nations League opener, Fernando Santos’s team looked in anything but good shape as the countdown to the Qatar World Cup begins.

However, two impressive performances have sufficed to bring about a radical alteration in the mood surrounding the Seleção.

A combination of exciting attacking play, solid defence and above all a pleasing team cohesion – despite considerable rotation of personnel – has raised expectations about what this squad can achieve in the coming months.

Tomorrow, Portugal attempt to make it three victories on the bounce as they play Switzerland in Geneva. Having crushed the Swiss 4-0 in Lisbon one week ago, the Seleção will fancy their chances of picking up the three points, but will have to do so without captain Cristiano Ronaldo.

Ronaldo given the day off

Whenever Ronaldo does not play for Portugal, it is a story in itself, but Santos explained he was simply managing the minutes of his players.

“It’s a question of normal management. It was planned from the start,” replied Santos when asked about Ronaldo’s absence from the squad that travelled to Switzerland. “We have been making the choices that we believe are the best in terms of the physical management of the players, and this time it is these three [Ronaldo, João Moutinho and Raphael Guerreiro] who miss out.”

As ever when a Portuguese side plays in Switzerland, support for the visiting team will not be lacking as a signifcant proportion of the crowd will be made up of the large Portuguese emigrant contingent who reside there.

Santos was keen to downplay the significance of Portugal’s big win against the same opponents last week.

“Switzerland will be different for sure. The first game against them at Alvalade was an abnormal result. Switzerland is one of the teams that has improved the most in the last ten years. They have players of the highest quality and are a very well-organised and consistent team. They’ve qualified for all the last tournaments. And even against us they had periods when they were competitive and created problems for us.

“They will analyse that game and what went wrong. We’ll do the same, because we didn’t do everything right. We are expecting a Switzerland team that will be wanting to show they can match Portugal. Against Spain they played aggressively and could have drawn.”

Switzerland try to stop the rot

The words of praise from his opposite number will not appease Switzerland coach Murat Yakin, who will be desperate for a change of fortunes after three straight defeats in the competition so far. Despite the poor start, Yakin says he will not be making wholesale changes to his team.

“We should not compare with the past; not with the Portugal game and not with what we achieved in the autumn. We have made defensive mistakes and you get punished at this level. Against Spain we improved and I won’t make major changes.”

Kicking off with @northernireland hosting Cyprus from 1.15PM! 💚🇨🇾#NationsLeague pic.twitter.com/Faz47GtgB0