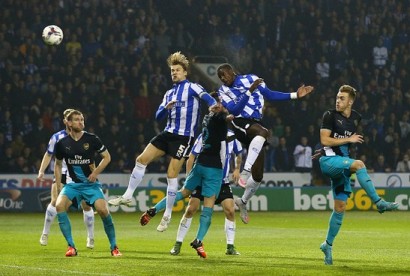 Ricardo Pereira is also rewarded for his excellent form in France, and there are recalls for midfielders André Gomes and William Carvalho after injury, and goalkeeper Eduardo.

Captain Cristiano Ronaldo will sit out the two friendlies away against Russia (14 November) and Luxembourg (17 November).

Portugal’s current side is packed with talent, especially in midfield, but the chronic problem of finding a reliable striker is far from being resolved.

Santos appears to be actively seeking solutions, as shown by his selection of two strikers who play in the second tier in England: Sheffield Wednesday’s Lucas João and Nottingham Forest’s Nélson Oliveira (on loan from Benfica).

Benfica forward Gonçalo Guedes can also be used as a striker, having occupied that role for the U21 side, although for his club side he plays as a winger/wide midfielder.

Santos has shown thoughout his time as Seleção coach that he is willing to give a broad range of players a chance. This squad backs up that policy, as do his explanations at today's announcement.

"Today is the first day of Euro 2016. We can take advantage of the fact we have qualified without the need for a play-off to start thinking about the Euro right now," said the veteran coach.

"I have a group of players in mind that are not limited to the 23 or 24 or even 30. There is a range of players we are observing, some of them are part of the U21 set-up but have the chance to represent Portugal at both levels."

After the upcoming friendlies Portugal will play at least two more preparation games, in the next calendar year, before the European Championship in France next summer.