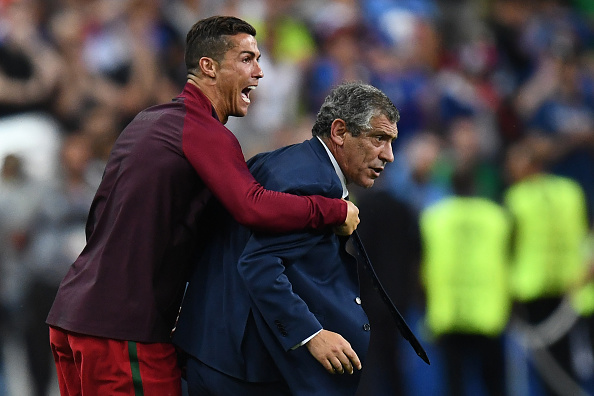 In an extraordinarily gritty and heroic performance, the Seleção, deprived of their captain through injury, won their first ever major championship trophy in extra time at the Stade de France in St Denis.

Cristiano Ronaldo's injury in the 8th minute left him in tears and the hopes of millions of Portuguese supporters in tatters. But the Seleção displayed the courage and bravery of true champions as they wrestled back control of the match from France and won in the 110th minute courtesy of a wonderful strike by Éder.

The tournament's marquee match-up was built up as one in which the proverbial David would surely be slain by Goliath. From all over the world, opinion merged into unprecedented unanimity as France were heralded as the champions-to-be. But Fernando Santos played off the criticism well in the pre-match press conference stating "I want it to continue. Tomorrow I want Portugal to win without deserving to!"

The pragmatic specialist made two changes to the side that beat Wales 2-0 in the semifinals on Wednesday with Danilo and Bruno Alves making way for William and Pepe, respectively.

Nevertheless, the match began following the template that most would have expected with France pressing high up the pitch and dictating the tempo. Portugal were clearly awed by the occasion and misplaced several straightforward passes gifting France opportunities to open the scoring. Unsurprisingly, it was Antoine Griezmann to fire the first warning shot, a looping header that Patrício did well to tip over the bar for a corner in the 10th minute.

But that came moments after Cristiano Ronaldo was knocked off the ball by Dimitri Payet, a rough but fair challenge that left the Portugal captain clutching his left knee in pain. Minutes later, Ronaldo collapsed to the pitch in tears, the fate of a nation seemingly about to walk off the pitch with him. It was a crushing moment for Portugal's captain and the Seleção. Ricardo Quaresma came on in his stead in the 25th minute as Nani took the captain's armband.

Moussa Sissoko, for all that has been said of his poor form for Newcastle during the 2015/16 club season, tried his utmost to torment Portugal, and he signaled his intent by driving hard at the Portuguese defensive line, his cross cut out at the last moment by José Fonte.

Rui Patrício was called upon again to deny Sissoko from close range after he cut inside Adrien to make space in the 33rd minute. Having endured the worst of the French onslaught, Portugal strung a few passes together and created a decent shooting opportunity for Adrien after Nani cut inside his marker from the right. But the Sporting midfielder took too many touches before passing to Raphaël, who mishit his effort wide of goal.

The halftime whistle brought a welcome respite as the emotional burden of losing Ronaldo and relentless pressure from France threatened to overwhelm Portugal. But Sissoko picked up where he had left off and forced a last ditch clearance from Pepe in the 52nd minute after another blistering run through midfield.

France spurned the first of two glorious second half chances in the 66th minute when an unmarked Griezmann headed just over the bar from Kingsley Coman's cross. Portugal finally tested Hugo Lloris twice in quick succession when Nani's looping cross had to be pawed away. Ricardo Quaresma followed up with a bicycle kick that was straight at Lloris as Seleção fans held their breath thinking it might be the golden moment for Portugal's prodigal son.

Rui Patrício, who put in another legendary performance, once again denied Sissoko in the 84th minute as the midfielder found space to shoot from almost 30 yards. His brutal effort was parried away for another corner as France searched for the winning goal.

The moment that could have been Portugal's undoing came in stoppage time via the unsung Andre Pierre-Gignac. The 30 yr old striker, who plays his club football for Tigres in Mexico, executed a brilliant spin that eluded Pepe's challenge and hit the inside of the upright with a shot from point blank range that bounced away to safety, an enormous let-off for Portugal.

The game headed to extra time and Cristiano Ronaldo returned to the pitch, encouraging the players as they prepared for 30 more minutes. But this was what Portugal were made ready for all throughout the tournament. And as extra time began, it was clear they were ready to suffer more to secure victory.

Portugal began to threaten with better passing exchanges and off the ball movement. A Pepe header was just off target in the 104th minute even though it was eventually called offside. Éder was next to go close as his header was expertly blocked by Lloris. Then Raphael Guerreiro smashed the crossbar with a stunning free kick minutes later.

The tide had turned, and the historic moment finally came in the 109th minute. In a neat passing movement involving Moutinho, William, and Quaresma, the ball fell to Éder on the left wing 35 yards from goal. The Guinea-Bisseau born striker's lanky frame bowed under the challenge of Laurent Koscielny, but held firm as the French defender fell by the wayside. Staggering to regain his balance, Éder cut towards the center of the pitch, gathered his composure, and dispatched a punishing effort into the bottom left corner from nearly 30 yards.

Bedlam descended upon the red and green portion of the stands and indeed all over the world as Portugal's diaspora felt that this must finally be their time. The goal shattered French resolve and it must be said that after going close so many times throughout the 90 minutes, France went out rather tamely in the end.

In a tournament that has seen so many records fall, so many extraordinary and historic moments, it was Portugal that crowned Euro 2016 with a brilliant and tenacious performance that earned their first ever major championship. As the Seleção and Portugal sang and danced in ecstasy, the French players left the pitch wondering what might have been, many so upset that they refused to wear their runners-up medals.

Over the course of the 90 minutes, France were unlucky not to find a winner. But this Portugal team were custom made champions by the hard-nosed and unflinching Fernando Santos. It was they who refused to buckle under pressure even as they were so unjustly deprived of the services of their talisman, Cristiano Ronaldo. In the end, Pepe, Jose Fonte, Rui Patrício, William, Éder, and the Portuguese will to survive broke the will of France's talented players. Defense wins championships, and as a result tears of joy will run all over the world as Portugal brings home the trophy it so richly deserves.