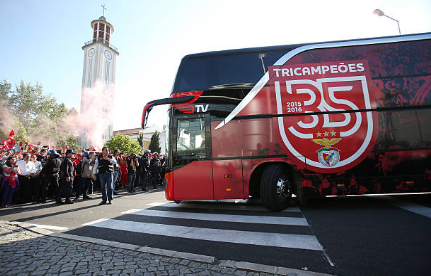 Benfica’s team bus has been the subject of a late-night attack after their 0-0 draw at home to Tondela on Thursday evening, leaving both Julian Weigl and Andrija Zivkovic requiring treatment in their return to Seixal, the Eagles’ training camp.

The title holders, who sought to overtake FC Porto at the top of the table after the Dragons’ loss to FC Famalicão on Wednesday night, failed to go beyond a 0-0 draw at home to Tondela in their first game since the Coronavirus pandemic shutdown, keeping them level with the league leaders on points, but ultimately behind on head-to-head results.

Benfica’s squad and entourage was on its way back from the Estádio da Luz when a stone, believed to have been dropped from an overhead bridge onto the team bus, smashed one of the windows on the bus.

As a result of the impact, both Zivkovic and Weigl are both reported to have been hit by shards of glass, being treated for their injuries back at the training camp before being sent to hospital as a precaution, as confirmed by the club in an official statement.

Zivkovic’s injuries carry the most cause for concern, affecting the Serbian’s vision, meanwhile the incident brings back traumatic memories for Weigl , who many will remember was part of the Borussia Dortmund squad that had been a target of a roadside bomb, inflicting similar damage to the German club’s bus prior to a UEFA Champions League tie against AS Monaco, in April 2017.

Despite being accompanied by a sizeable police presence, the Portuguese police are yet to identify the culprit, or culprits, of Thursday night’s attack.