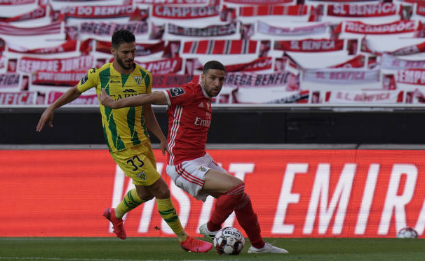 Benfica missed the opportunity to leapfrog FC Porto at the top of the Primeira Liga following the latter’s 2-1 loss away to FC Famalicão, as Tondela helped themselves to a crucial 0-0 draw at the Estádio da Luz.

After almost three months away from action, the Dragons welcomed back the race for the title with a clash against Famalicão, offering Benfica the chance to overtake the ‘Blue & Whites’ after João Pedro Sousa’s side’s shock win.

With just a point between Porto and the Eagles, a draw for Bruno Lage’s men at home was only enough to see them go level with their rivals on points, being kept in second place behind the northern outfit on head-to-head results.

FC Porto recommenced their defence of top spot with a visit to early-season sensations FC Famalicão, desperate to reignite some of the good form that happened to desert them at the turn of the new year.

Famalicão’s Rafael Defendi proved to be in good nick, denying Moussa Marega bearing down on goal in the 11th minute before being called upon again in the 34th minute to keep out Tiquinho Soares’ point-blank header, as the two sides took a 0-0 draw into the break.

A show-stopping performance wouldn’t extend itself to Augustín Marchesín at the other end, landing Porto in big trouble two minutes into the second half after misplacing a pass directly to Fábio Martins and allowing the winger to tap home the opener.

Jesús Corona was on hand to meet Sérgio Oliveira’s diagonal pass into the box in the 74th minute and fire in the equaliser, but the Dragons’ fightback was dismantled rather quickly by Pedro Gonçalves, sinking in a long-range effort just four minutes later to put Famalicão 2-1 up.

Devoid of luck in the final third, defeat for Sérgio Conceição’s men passed the torch onto Benfica, who could've topped the table with a win at home to Tondela.

Following Porto’s away lose to Famalicão, Benfica eyed a dream return at the Estádio da Luz with a win that would propel them back to first place, having wobbled in form pre-lockdown.

A blistering start from the Eagles almost saw them race away with a 1-0 lead within the opening two minutes, with Rafa Silva pouncing on a loose ball inside the box prior to Cláudio Ramos’ important stop.

That sort of freedom inside the box would be scarce for the hosts in the first period, who’d only threaten again in the second half, once more through Rafa when angling a shot across goal and just wide of the target in the 47th minute.

Pizzi, in search of the opener, forced Ramos into further action little less than ten minutes later, as Tondela began to retreat into their final third in a bid to shore up their backline. Filipe Sampaio set the tone on the hour-mark with a crucial block to deny Carlos Vinícius a clear pop at goal, prolonging the goalless scoreline.

With only their second shot of the game, Richard Rodrigues came very close to edging the visitors in front after leaving André Almeida floored and whipping a curled effort just wide of the far post, 75 minutes in.

The Lisbon outfit went one closer with a towering effort at the back post from Rúben Dias, hitting the woodwork with a downward header just moments before Haris Seferovic also caused Tondela a spot of danger in the 79th minute.

Second-half substitute Dyego Sousa claimed the final opportunity deep in stoppage time with a goal-bound header, cleared off the line by Marko Petkovic and signalling no way through for Benfica in a goalless draw.