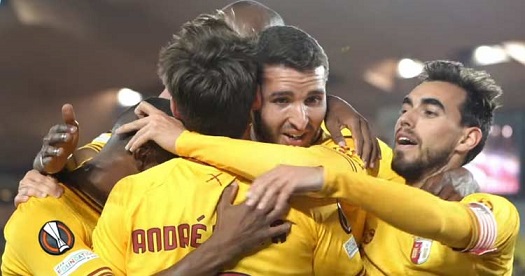 Braga drew 1-1 in Monaco to complete a 3-1 aggregate victory and progress to the quarter-finals of the Europa League on Thursday evening.

Porto failed to join their northern rivals, however, as another 1-1 draw, in Lyon, meant the Dragons lost the tie 2-1 on aggregate.

Braga came into the match in a strong position after winning the first leg 2-0 at the Quarry last week. Although Monaco naturally took the initiative throughout the 90 minutes, Braga’s approach was not purely defensive, the Arsenalistas always carrying a threat on the break.

The Portuguese team were rewarded for their positivity when Abel Ruiz fired into the net from 25 yards to put the visitors into the lead on the night and 3-0 up on aggregate.

Monaco poured forward, but a steadfast effort by Braga’s back line and midfield, with David Carmo, Fabiano and Al Musrati especially impressive, kept the chances of the French team to a minimum. When the Ligue 1 outfit did get a sight of goal, Brazilian goalkeeper Matheus was alive to the danger, making some sharp stops.

It looked like Braga would rack up a second successive win over Monaco, but a towering header in the 90th minute by Axel Disasi made it all square on the night. Braga will not be too bothered though, as they await their opponents in the last eight in today’s draw.

“I want to praise the attitude of my team and my players for the commitment shown. They carried out the plan we had asked of them fully. The idea was to start from 0-0 and try to win the match and not just defend the result [from the 1st leg]. I think we did that well.

“We had the game completely under control in defensive terms, it was almost a perfect game from the defensive point of view. In attacking terms, I remember three or four good opportunities where we could have increased our lead, but that would have been a little unjust taking into account the work of our opponents. But the reality is we controlled the game and we were the better team in the two games, in my opinion.”

And things got off to a bad start for the Dragons as Lyon took the lead in the 13th minute, Moussa Dembele beating the offside trap and sliding the ball past Diogo Costa to increase the French team’s lead to 2-0 on aggregate.

Porto did not wilt, however, and soon hit back with a wonderful team goal. A quick break saw the ball swiftly worked to the flank where an inviting Fábio Vieira cross was magnificently volleyed into the top corner on the turn by Pepê.

Vieira was at the heart of most of Porto’s good work in a fiercely contested match where chances were at a premium. The Dragons gradually ratcheted up the pressure with Conceição turning to his “big guns” in a series of substitutions throughout the second half. However, it was Lyon who came closest to scoring again, with Diogo Costa saving well from Dembele and Aouar.

An increasingly desperate Porto began to thrown everyone forward with captain Pepe almost scoring with a speculative 20-yard volley that was deflected just wide. And in the final seconds Porto’s big chance came, Pepe winning a header and the ball falling to Vitinha just 8 yards out, but the midfielder fluffed the chance to send the tie into extra time.

“The starting 11? I picked a team that I thought gave me full guarantees to win. We have played four matches in 11 days. With less used players we played a competent match today, and at the end we could have forced extra time, which would have been deserved.

“I want to congratulate the players; they played with enormous commitment. We did not lose the tie today, we lost it at the Dragão.”