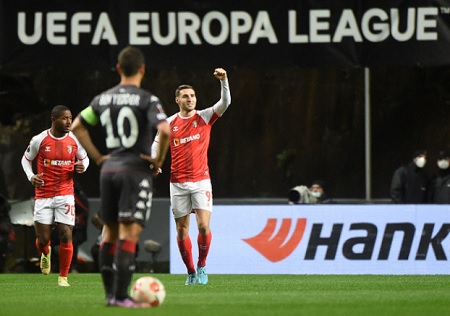 Braga produced a professional performance to beat Monaco 2-0 in the Europa League Round of 16 first leg. Abel Ruiz put the Portuguese club into the lead in the 3rd minute, the first half swinging from end to end with both goalkeepers making important saves.

The Principality club couldn’t find a way through in the second half and they ran out of ideas at the Quarry. Carlos Carvalhal’s side defended resolutely and put the icing on the cake in the 89th minute, Vitor Oliveira heading home to give them a cushion going into the second leg.

Braga began on the front foot with Abel Ruiz heading a corner on target. Monaco cleared the danger but only as far as Rodrigo Gomes, his hopeful shot deflected into the path of Ruiz who slotted the ball past Alexander Nübel.

Carlos Carvalhal’s side should have extended their lead minutes later. Ricardo Horta sent Iuri Medeiros through on goal, but he couldn’t beat Nübel who tipped the ball wide.

Monaco survived the storm and worked their way into the contest. Vanderson’s free kick caused some confusion in the 6-yard box with Matheus doing well to clear the danger.

Matheus to the rescue

Matheus was called into action again not long after, coming off his line to save a shot from Kevin Volland who found himself 1 on 1 with the Brazilian goalkeeper. Volland then turned provider, releasing Gelson Martins who beat Matheus but was ruled offside.

The action soon turned to the other end of the pitch as Braga got back on top. Ricardo Horta’s shot bounced in front of Nübel, he deflected the ball onto the post and was fortunate it didn’t roll over the line.

Al Murati was next to test the German keeper, blasting a fierce shot at Nübel before Medeiros sent his effort wide.

VAR to the rescue

The Principality club put the ball in the back of the net in the 33rd minute, Vanderson’s hopeful cross into the box headed home by Wissam Ben yedder, but VAR intervened and ruled the French striker offside.

Once again the tide turned in an exciting end to end match, Braga creating chances and going close to extending their lead.

Medeiros broke clear and shot wide, Fabiano next to break through the middle and fire a shot from distance over the bar. Vitor Tormena’s long ball then fell to Rodrigo Gomes, but the 18-year-old couldn’t generate enough power to beat Nübel.

Matheus was called into action one more time before the break, saving a shot from Vanderson who had ghosted behind Braga’s defence.

Monaco had a fabulous chance to equalise minutes after the restart. Jean Lucas sent Gelson Martins through on goal, but once again Matheus came off his line to make an important save.

Philippe Clement introduced Aleksandr Golovin for Eliot Matazo in the 58th minute, the Russian immediately involved with his shot blocked. Martins then headed Caio Henrique’s cross over the bar which prompted Carvalhal to act.

He made three changes in the 65th minute, Vitor Oliveria replacing Abel Ruiz, Paulo Oliveira and Francisco Moura coming on for Yan Couto and Iuri Medeiros.

Oliveria was almost guilty of heading Benoît Badiashile’s cross into his own net, Matheus diving to his left and tipping the ball wide.

Braga sit on their lead

Braga seemed content to sit deep, get men behind the ball and hit the visitors on the break. André Horta made way for André Castro and Miguel Falé came on for Rodrigo Gomes not long after.

Clement made changes up front with Ben Yedder replaced by Myron Boadu and Kevin Volland making way for Sofiane Diop, but it was Braga who would find the net in the 89th minute.

Fabiano’s cross evaded Monaco’s defence, Vitinha in the right place at the right time to head the ball into the bottom corner.

Matheus kept the clean sheet intact after putting his body on the line in added time.

Carlos Carvalhal surprised many by starting Abel Ruiz ahead of Vitor Oliveira, the Spanish striker going through a tough time and visibly lacking confidence. Scoring early on was just what the doctor ordered, it was his first goal since 30 November.

David Carmo’s return from a long injury layoff has been extremely beneficial for Braga. He was excellent in the heart of defence, and it’s no coincidence that Carvalhal’s side have kept four clean sheets in five games since the 22-year-old returned to the starting side.

Matheus was man of the match in the playoff second leg against Sheriff, making a number of important saves and coming up big in the penalty shootout. He appears to relish European nights at the Quarry, outstanding against Monaco and a big reason why the clean sheet was kept intact.

Rodrigo Gomes made his first start against Paços de Ferreira on 12 December and hasn’t looked back. He has started every game since, gone through some difficult moments, but is starting to look confident and comfortable at the highest level.

The 18-year-old took a beating against Monaco, repeatedly on the receiving end of some heavy challenges, but he got back up each time and went straight back into the firing line. Gomes received a standing ovation after being replaced by Miguel Falé in the 80th minute, the home crowd recognising his efforts and beginning to appreciate his talent.

Braga could be the only Portuguese club remaining in Europe next week. Sporting CP have been eliminated, Benfica face a tough challenge in Amsterdam, and Porto travel to Lyon with a 1-0 deficit.

Carvalhal’s side are one of the best teams to watch in Portugal with an abundance of talented youngsters. They continually nurture players that haven’t been lured by the temptation to join the youth academies at the top three clubs and provide a pathway to the first team.