Portugal 2-2 France match reaction: “The game against Germany served as a lesson” 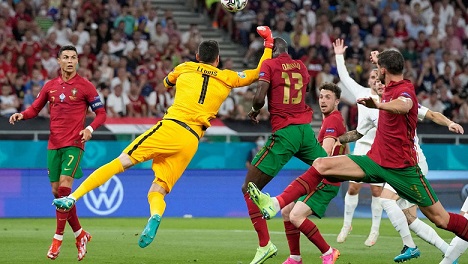 Phew! In what turned out to be a rollercoaster of a Group F participation by Portugal, the Seleção coach and players expressed their joy at making it through the knockout stage after a highly encouraging display against World Champions France.

It was a unanimous opinion that the team had done what they needed to do to bring about a vast improvement in relation to the previous match against Germany. PortuGOAL rounds up the post-match quotes.

“Portugal did everything well to win this game. We improved a lot compared to the last game. Now we have to improve some things for Belgium.

“It wasn’t the (different) players who transformed the team, it was the spirit that changed. Everything was different than against Germany. We played much better. We interpreted the game well, we were intense and we were balanced.

“The first France penalty? A penalty was awarded and I don’t even think it was a foul. I think the referee himself knew he got it wrong, later.

“I didn’t want the players to know the result from the other game. They were so intensely focused that at the end I was shouting for them to push forward but my voice didn’t reach them. That said, losing was good nothing. But nothing was secure. Hungary could have made it 3-2, and then if we lost we would have been out.”

Portugal 2-2 France match report: draw with France sees Portugal through to round of Last 16

“We’re European champions. We knew we could do better. We got through and that’s the most important thing. France were never on top, we controlled the game well.”

“The game against Germany served as a lesson. The team improved a lot, we were more compact defending, managed the ball better and that was reflected in what you saw.

“After the Germany game we took a hiding [from the coaching staff]. We improved a lot and were able to analyse the previous match and correct the mistakes we made. Although France play in a different system, every one of us knew what we had to do and I think you could see the effort everyone was putting in.

“Did we know the other result? I’m not going to lie and say we didn’t know... But I can say we were totally focused on this game. We knew if we did our job things would be go our way.”

“The main feeling is happiness. Football is magic. The team’s morale could have changed during the game. We’re very happy. It was a very high-level match.”