“One Thousand Miles to Jamor” 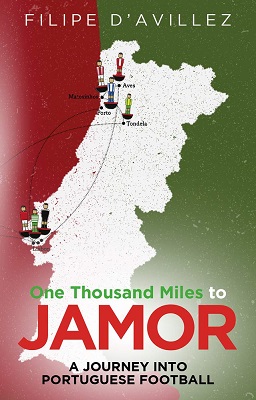 PortuGOAL’s book section is back with an absolute gem for lovers of the beautiful game in general and Portuguese football in particular.

Portuguese journalist Filipe d’Avillez embarks on a journey through every round of the 2018/19 Taça de Portugal (Portuguese Cup), right the way to a pulsating final at the singular and mythical Jamor Stadium, located in the midst of woodland outside Lisbon.

However, this is no ordinary football book. Avillez makes the fans the chief protagonists from start to finish, mingling with them and zooming in on the passions and emotions engendered by following their team in the competition, as well as describing the reasoning behind their loyalties and the quirky superstitions so common among football fans the world over.

For more on the book, an interview with the author and the chance to win “One Thousand Miles to Jamor”, read on.

At a time when football is being played behind closed doors because of the coronavirus pandemic, Avillez’s fan-focus is especially opportune, as he elicits a rich set of snapshots of supporters from all over Portugal, including its islands.

The result is an entertaining, colourful, and vivid portrait of football fandom in the country, and how this competition specifically manages to retain the magical essence of all that is great about the people’s game.

To listen to the author Filipe d’Avillez talk about his book and football in Portugal, this podcast is highly recommended.

🚨 The first part of our Portuguese football special is now live.

The boys are joined by Portuguese football author, @Favillez, to discuss the Taça de Portugal, the enchanted Estádio Nacional, the Portuguese Partick Thistle and so much more.

Three questions for the author

Congratulations on a magnificent book, which brings the “Festa da Taça de Portugal” to life so lucidly. What motivated you to write the book?

I remember clearly going to a Cup final between Vitória (Guimarães) and Benfica a few years ago, the one in which it rained from start to finish, and before the game started I went for a wander around the outside of the stadium and that was when I really came to grips with the phenomenon of the fans who go to the final, and party and picnic but have no prospects of actually making it into the stadium.

I had been to Jamor several times before, both for Cup finals and also for a spell when Benfica played their home games there, before the new stadium was finished, and so the surroundings were very familiar to me but that was the first time I stopped to consider how it would be almost unthinkable to hold a cup final in a stadium and atmosphere like this anywhere else in Europe. On the other hand, that atmosphere was exactly what gave the cup final in Portugal its unique ambience.

That got me to thinking about how I could express this better, which led me to realise that there is no book of this sort in Portugal, in a “Road to Wembley” style. From then on, I couldn’t get the idea out of my head. I offered to make it a series of stories for the media group I work for, but they turned me down, so I went ahead with it and wrote the book. I’m glad I did that season, because if I’d done it this season it would have been much more complicated!

What makes the Taça de Portugal such a universally loved competition among Portuguese fans?

But there is another layer to it. I would never be bothered to watch a game between two lower level clubs that I don’t have any particular feeling for, not least because the football itself is usually pretty poor. But with a cup game you know there is going to be excitement, because somebody has to come away a winner.

All this, and the fact that you get to play clubs you often wouldn’t cross paths with, contributes to a festive spirit which is unique to the cup and which helps to attract people.

The book speaks of the joy football brings but also discusses many of the problems afflicting Portuguese football. After spending so much time with such a broad spectrum of fans when researching the book, are you optimistic or pessimistic about the future of the game in Portugal?

On one hand, I recognize that there is a drive among many fans to get back to the basic values of the game. Take my club, Benfica, for instance. For decades, hardly anybody had a clue who Cosme Damião was. Then a flag with his face appeared in the stands and people started asking questions, researching, finding out about some of the people who founded the club and made it what it is.

It was only years later that the board itself decided to name the club’s museum after him. But the movement to recognize his importance started at the grassroots level. Other clubs have been doing the same.

Nowadays we see more and more initiatives, starting with the fans, to promote the values of the traditional game and keep them alive, and all of this is great, and I hope my book is a part of it.

On the other hand, though, there are very worrying signs as well. More and more, fans are being treated as clients rather than members, or “sócios”. And next season we will be treated to the “cartão de adepto”, the fan card scheme which makes us register, like common criminals, if we want to go to away games, or if we want to sit in certain sectors of our own stadium.

The irony of this is that I remember well what the 90’s were like in football, and there is no where near as much violence as there used to be, especially in the stadiums. I’m not saying that there isn’t a problem, there is, but it can and should be fought properly, by identifying the culprits and punishing them personally. There cannot be collective blame.

I would hope that this period we are getting into might be an opportunity for fans to put their more petty rivalries behind them and unite to fight against these bigger threats.

Finally there is the aspect of the smaller clubs that have been falling prey to dodgy investors, selling the majority shares of their SAD’s and in some cases, like Belenenses, and others, getting to a point where the club has to start from scratch. There is a growing tendency for clubs o go after easy money, and that is a worrying trend.

A big “obrigado” to you Filipe for your time and once again congratulations on writing a wonderful book. Would you please set a question for our readers to win a copy.

Competition question: Since the first final played in the Jamor only one club, FC Porto, has played finals in its home stadium. Which was the first of those games, and who won it?

So there you have it. Please send your answers to Filipe’s question to This email address is being protected from spambots. You need JavaScript enabled to view it. by midnight on Sunday 31 May, Lisbon time. All the correct answers will enter a draw and two winners shall be sent a copy of “One Thousand Miles to Jamor”. The winners will be announced on this page on 1 June.

Article update: Congratulations to Nigel Evans (UK) and Lawrence Rebelo (USA), whose names were drawn out from the dozens of correct answers received. A copy of the book is on its way to each of them. The correct answer was the 1960/61 Portuguese Cup final, which was won by Leixões. Thank you for entering. Keep track of this section of the site for more book contests in the coming weeks.

“One Thousand Miles to Jamor” by Filipe d’Avillez is published by Pitch Publishing and is available now (£12.99, paperback) online at www.pitchpublishing.co.uk and other websites and in bookshops.

An excellent read and very interesting insight into Portuguese football outside of the top tier.
Would love to see another book with visits to other clubs around the country

Agree with the above comment. Really enjoyed this book. Good window into football in Portugal.

Simon Taylor
There are no comments posted here yet