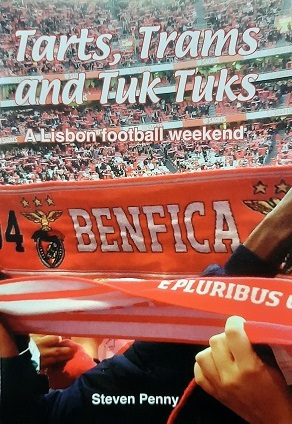 PortuGOAL’s book corner is back with a little gem of a book depicting the adventures (and misadventures) of a group of English football tourists on a long weekend trip to Lisbon.

Written in a lively, entertaining and informative style, Steven Penny describes how he, his son and a group of likeminded football enthusiasts discovered the wonders of watching football at venues as diverse as the Jamor National Stadium, Amora and Benfica’s Estádio da Luz, among others.

Enriched by a wonderful collection of photographs, “Tarts, Trams and Tuk Tuks” is the perfect appetizer for anyone intending to visit Lisbon to take in the football and non-football experiences the Portuguese capital has to offer.

Read an interview with the author and enter our competition to win a copy of the book.

Congratulations on an extremely entertaining and informative book. There is no lack of famous football cities throughout Europe. Why Lisbon?

I subscribe to a monthly magazine – Football Weekends – and three or four times a year it organises a four-day trip to a European country, based around one ‘big’ match. I had previously been to Germany for a Borussia Dortmund match and really enjoyed it.

After the Covid lockdown, the first trip was to Portugal, based around a Benfica match, so I thought I’d get some winter sunshine while taking in a new part of Europe.

Overall, did the trip live up to expectations?

It was a fantastic weekend. The weather was perfect, and as well as Benfica’s match against Vitória Guimarães, I also managed to get to games at the Jamor, Alverca, Amora and Estoril.

Was it difficult to organise? What advice would you give to anybody planning a similar excursion?

While it is possible to organise a trip yourself, it is so much easier as part of a package deal, especially getting tickets for a big club. The hotel and transport is also at a cheaper price as part of the deal so it probably works out cheaper. For first-time travellers, especially, it takes away all the worry and any concerns about being in a foreign country.

Football Weekends tours are organised through Sweden-based nickes.com and they can arrange packages for individual travellers as well as groups.

Going in a group adds an enjoyable extra element to the experience.

What was your favourite memory of the city of Lisbon itself (or the surrounding area) from a tourism point of view?

The highlight was probably the Monday morning ‘tuk tuk’ tour. The contrast between the narrow city streets and wide-open squares with stunning architecture was at times breathtaking. The views across the city from the various vantage points high in the hills were particularly exhilarating.

There was always something new and interesting to see around every corner – whether it be a giant cat in the park alongside the Vasco da Gama bridge or the Ponte 25 de Abril and the Santuário do Cristo Rei statue. 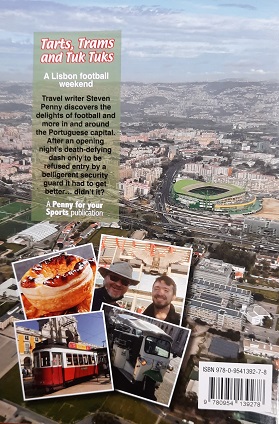 Moving onto the football itself, what surprised you most about watching football in Portugal in comparison to watching matches in England?

The football itself was of a very similar standard, possibly due to the multi-national status of most teams in both Portugal and England.

At lower levels the crowds in the Lisbon area seemed more vociferous, possibly due to the nature of the stadiums, with everyone packed into a single stand on one side of the ground. In England all four sides are used, often diluting the atmosphere but offering better backdrops, rather than the empty terraces and stands you look out to in Portugal.

One surprise was how low the top-level crowds are outside the Big Three. Visiting the Jamor was a real experience, such a small crowd in that huge bowl with so much history attached to it.

How would you rate the quality of:

These varied a lot. There was everything you could possibly need at Benfica. Alverca was a delight with a wonderful bar, very hospitable staff and an incredible burger and chips!

World-class at Benfica. Hard-working and always willing to experiment and entertain at lower levels.

Same the world over. Match officials do their best!

Transport was fantastic, with a wide choice of modes: tram, underground, train, bus, taxi and even tuk tuk or bicycle, as well as walking (but don’t forget the hills!). We had problems getting into the Jamor due to a lack of signposting and a ‘jobsworth’ steward but everywhere else the systems worked well, with friendly staff on hand to help.

Did you manage to converse with local fans, club staff? If so, what did they think of your venture?

Everyone we spoke to was proud to promote their club, whether it be Benfica, Belenenses or Estoril at the top level and especially Amora and Alverca lower down. They were delighted to see English people breaking out of Covid to enjoy their city and appeared honoured we had ‘chosen’ their club to visit. It was very humbling. The man in the Estoril club shop was particularly attentive and very keen to practice his English on us.

One thing we did notice was that while we tourists were in T-shirts and shorts, most of the locals were wrapped up in winter coats!

The visit to Amora marked my 500th different ground but it proved to be the only let-down of the trip. Despite the hot weather, our water bottles were confiscated on entry and there were no refreshments available inside. It made for an uncomfortable 90 minutes with no shade to cool down in.

Would you return to Lisbon for a similar trip again

Yes, definitely! I’d love to bring my wife to experience such a wonderful city – and sneak off to visit Sporting and a few of the other clubs in and around the area!

Three cheers for Lisbon bakeries – always keen for me to sample their wonderful pastel de nata!

Competition question: Steven mentioned several clubs where they watched games in and around Lisbon. But how many clubs from the Lisbon region are currently (in 2022/23) in Portugal’s top flight?

Send your answers to This email address is being protected from spambots. You need JavaScript enabled to view it. by midnight on Thursday 20 October, Lisbon time, for a chance to win the book.

All the correct answers will enter a draw and the name drawn out of the hat shall be sent a copy of “Tarts, Trams and Tuk Tuks”.

Article update: Congratulations to Ryan Barry from Wakefield, Massachusetts, USA whose name was drawn out of the hat after sending in the correct answer: 4 (Benfica, Sporting, Estoril Praia and Casa Pia), and who will receive a copy of the book. We would like to thank everybody who entered the competition. Keep track of this section of the site for more book contests in the coming weeks.

“Tarts, Trams and Tuk Tuks” is published by Penny For Your Sports Publications. You can purchase the book direct from the author at This email address is being protected from spambots. You need JavaScript enabled to view it. (£6 including UK postage and packing) or from eBay by clicking on this link.