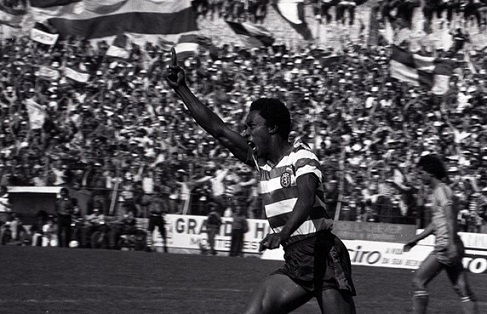 It was never definite that we could talk to Rui Jordão, but our hopes were high that he would be seduced by the subject matter. Through a labyrinth of protective contacts, we had finally worked our way carefully to the point of being able to talk to the great man directly, but, far from that being the beginning of the plain sailing, it proved to be the beginning of the end. We never did get to interview Jordão, despite friendly conversations in which he graciously thanked us for our interest in him and expressed a willingness to meet up.

Our book about Portugal’s trials and tribulations across 13 finals tournaments, the Thirteenth Chapter, was the worse for not being able to include his thoughts. For many of a certain generation, Rui Jordão was a fixed reference point in the youthful process of growing to love football, but we were not to know at the time that football was no longer the main passion of his life.

A quiet, introspective man, Jordão rose to the top of his profession with willpower, athleticism and a slightly ungainly style that made him a striker that nobody could really say they had defended particularly well against. Even if you stopped him scoring, he would have been enough of a handful to lay on goals for others or at the very least leave you bruised and battered from a proper physical battle.

The Angolan, born in the beautiful coastal city of Benguela, to the south of the capital Luanda, arrived in the Portuguese capital in 1971, seduced by the idea of following in the footsteps of legendary African talismen Eusébio and Mário Coluna at the Estádio da Luz. In five seasons from his arrival, Benfica failed only once to be champions, with Jordão contributing most prolifically in 1975-76, with an abundant harvest of 30 goals.

Trying his luck in the Spanish top flight with Real Zaragoza, Jordão lasted only one season across the border, before being tempted back by Benfica’s deadly rivals Sporting, to form a powerful strike partnership with the inimitable Manuel Fernandes. There he flourished again, making hay with the national side as well, his haul of 15 goals in 43 matches including two of the most famous Portuguese goals of all time, falling in the same match in the white-hot atmosphere of a European Championships semi-final in Marseille.

Jordão’s strikes, typically asymmetrical, fell either side of the final whistle of a breathless game on the Canebière, one saving the night and taking the tie to extra time, the other – incredibly – putting Portugal into an extra time lead against the home nation for a brief exhilarating few minutes, before Michel Platini broke Portuguese hearts.

Jordão famously scored a brace for the Seleção in what is widely regarded as one of the greatest international games ever played: France 3-2 Portugal, Euro 1984 semi-final => https://t.co/DYKHVfdPLw

Jordão’s double that night brought Portugal to within a hair’s breadth of their first final appearance. They would have to wait another 20 years before the opportunity resurfaced.

Jordão stayed at Alvalade from 1977 to 1986, his grand total of 186 goals in 286 matches making him an unforgettable pillar in the modern history of the club. He formed first with Fernandes, then with António Oliveira, two of the most majestic strike pairs the club has possessed. Playing in tandem with Oliveira in 1981-82, he was a cornerstone of Malcolm Allison’s double-winning Sporting side and would later play under Allison again in Setúbal, once again alongside his perfect foil Fernandes, at the tail end of the careers of all three men.

He wound down his career in Setúbal, playing quietly and efficiently for Vitória.

Life after football can be a trial of strength for many players, but Jordão drifted quietly to the periphery and concentrated on another creative talent: his painting. It gave him fulfilment of a different kind and made the transition from athlete to aesthete a simple and rewarding step that for so many is a harrowing jump into the darkness of the great unknown. The “Gazelle of Benguela” could jump with the best of them and his second life as an artist showed that his talent was never restricted solely to the green grass of football.

That he filled that difficult time after football so successfully says everything about a man of balance and perspective, for whom football was only part of the story. How sad that no one will now get that final interview.

Great article but a shame about the lost interview.