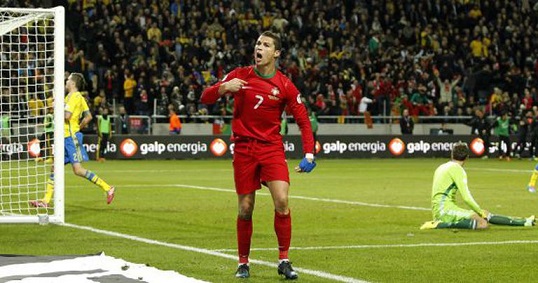 It’s a good bet Cristiano Ronaldo will score his 100th goal for the Seleção tonight at the Friends Arena in Stockholm, Sweden.

Should he do so, it would be highly appropriate to reach the astonishing milestone at the venue of probably his greatest ever performance in a Portugal shirt.

In an extract from The Thirteenth Chapter – From Eusébio to Ronaldo – Portugal’s 50-year journey from football minnows to European Champions, Tom Kundert recounts how an unplayable Ronaldo tore Sweden’s defence to shreds to book Portugal’s place at the 2014 World Cup.

The tremulous screaming voice of legendary Antenna 1 commentator Nuno Matos, inebriated by the work of genius he had just witnessed, is firmly embedded in Portuguese football folklore: “Hat-trick for Cristiano Ronaldo!!! Hat-trick for the world’s best!!!! Hat-trick that takes Portugal to Brazil!!! Saaaaaaaaamba!!! Ronaldo!!! He’s unique!!! He surpasses the limits of logic!!! It’s glory, it’s victory, it’s a supreme moment!!!”

Almost half a century earlier, that other genius of Portuguese football, Eusébio, had written his name indelibly into the annuls with a wondrous individual display to turn around a 3-goal deficit against North Korea and single-handedly propel Portugal to the semi-finals of the 1966 World Cup. On an autumn night in Sweden, Ronaldo gave a display every bit as devastating.

The Seleção had enjoyed much the better of the first half, playing with commendable composure considering what was at stake. Ronaldo had come close several times and had teed up Hugo Almeida perfectly, only for the striker to head wide of a gaping goal. But with the deadlock yet to be broken, Portugal were only one goal up on aggregate and the tie was still wide open as the second half kicked off.

The match exploded into life after the break.

Five minutes into the second period a quintessentially Portuguese slick passing move saw João Moutinho release Ronaldo with a perfectly weighted through ball. The captain still had plenty to do as he accelerated into the box diagonally, but he injected such pace into his left-foot shot that Sweden goalkeeper Andreas Isaksson was left grasping at thin air as the ball hurtled into the net. It was the trigger for wild celebrations among the entire Portugal contingent. Sweden now required three goals to turn around the tie in 40 minutes. The Seleção were surely on their way to the 2014 World Cup.

With the rampant Ronaldo causing havoc in the Sweden defence, it seemed even more of a certainty as the clock ticked down, until the 68th minute. Poor defending by Bruno Alves allowed Ibrahimovic to head a corner directly into the net past Patrício while barely having to lift his feet off the ground. Four minutes later and the Swedish striker’s fierce free kick from the edge of the 18-yard box fizzed under the Portugal goalkeeper to make it 2-1 on the night and 2-2 on aggregate. Suddenly Sweden were one goal away from destroying Portugal’s Brazilian dream, and the hostile crowd sensed blood.

Paulo Bento responded by throwing on Sporting’s young holding midfielder William Carvalho to try and shore up a midfield that had become alarmingly porous. Ten million Portuguese at home and millions more from the diaspora collectively held their breath. Welcome to international football William.

Yet as quickly as Ibrahimovic had reignited Sweden’s aspirations, Ronaldo took it upon himself to extinguish them. Minute 77. Hugo Almeida hooked a pass over the top, inviting Ronaldo to sprint clear. Tearing into the box, Ronaldo again showed a superhuman mixture of raw power, coordination and composure as, once more at full speed, he smashed a low left-footed angled shot across Isaksson for the equaliser. Minute 79. João Moutinho picked up the ball near the halfway line, spotted Ronaldo’s run and angled an inch perfect pass into the path of his insatiable captain. Again on the run, Ronaldo took two defenders and the goalkeeper out of the equation before driving a rasping finish, this time with his right foot, into the roof of the net.

Cue Nuno Matos losing himself in a desperate attempt to find appropriate eulogies. Ronaldo’s hat-trick goal saw him equal Pauleta’s record of 47 as Portugal’s top scorer. Ronaldo was not finished yet, three times coming close to matching Eusébio’s four-goal haul from all those years ago.

Amid the praise gushing down on the Portugal superstar from all quarters, it is understandable that Moutinho’s world-class passes for two of Ronaldo’s goals were overlooked, as was Bento’s brave decision to select Hugo Almeida, the striker also playing a beautiful through ball for Ronaldo’s second.

But on this occasion, one could forgive the media focusing on the individual rather than the collective. On that Stockholm night of 19 November 2013 Ronaldo had truly produced a performance for the ages.

Our current squad is an upgrade from then in every area but Moutinho and Pepe.

Since then he’s more than doubled his tally!

Without a doubt, one of the greatest individual big game performances in Ronaldo's career. He was unplayable that night. That being said, Moutinho's through-balls for the first and third goals were absolutely superb. Let's hope we get another...

Without a doubt, one of the greatest individual big game performances in Ronaldo's career. He was unplayable that night. That being said, Moutinho's through-balls for the first and third goals were absolutely superb. Let's hope we get another vintage performance tonight in Stockholm!

That team was totally reliant on one player,Bento was a one dimensional coach with no plan beyond Ronaldo Brazil 2014 was a disaster because of it ..... current squad would destroy 2014 Portugal NM squad without a doubt

Yup I agree with everyone here and to take it further, this team currently in my opinion is the best Portuguese team we’ve ever had. I’m only speaking in terms of quality and depth. Just to play devils advocate though, if the team that played...

Yup I agree with everyone here and to take it further, this team currently in my opinion is the best Portuguese team we’ve ever had. I’m only speaking in terms of quality and depth. Just to play devils advocate though, if the team that played against Croatia played against the Euro 2012 team with prime Ronaldo than I’m not sure if the team today would win. Think about a prime Ronaldo at 26 years old going against Pepe and Ruben Dias...that Ronaldo alongside prime moutinho ,Nani, Meireles and Coentrão etc would probably win. It’s crazy to think about guys like Ronaldo because he’s almost had two different careers in one career. Reminds me of Kobe Bryant actually, Kobe in his 20s was unstoppable because of his skills and athleticism and in his 30s he was unstoppable too because he was so much smarter than everyone who guarded him.

Ronaldo is a bit unfortunate that his absolute peak (2006-2014) happened to fall in between arguably the two strongest generations in the history of the Portuguese national team. Imagine if a 20 something Ronaldo played alongside the likes of...

Ronaldo is a bit unfortunate that his absolute peak (2006-2014) happened to fall in between arguably the two strongest generations in the history of the Portuguese national team. Imagine if a 20 something Ronaldo played alongside the likes of peak Figo, Rui Costa, Joao Pinto, Paulo Sousa, etc.

That being said, even at the age of 35, he is still arguably the best all around goal scorer in world football, and he is definitely every bit as clutch and decisive as he was in his 20s. Thankfully, we no longer need to rely on him to be both our primary goal scorer and primary playmaker, which was the case for most of the Queiroz, Bento, and even part of the Santos years. With the likes of Bernardo, Fernandes, Felix, and even Cancelo and Guerreiro, who offer outstanding offensive output from the fullback position, we really just need him to use his football IQ and predatory instinct to put the ball in the back of the net.

He may only have another 2 or 3 years left in the tank for the Selecao, but I have no doubt that he will still play a vital role if we are to do something special at the Euros or in Qatar!

In 2013 Ronaldo era verdadeiramente o Rei do Mundo, but how far could he have come without João Moutinho’s brilliant play no midfield?

Francisco Z
There are no comments posted here yet