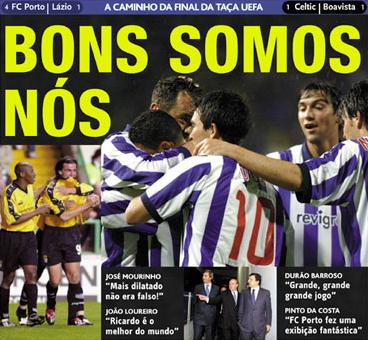 With Porto’s keenly awaited clash against Bayern Munich exactly one week away, PortuGOAL kicks off its classic matches series with one of the Dragons’ greatest ever European nights.

A confident, brash, emerging coach going by the name of José Mourinho, embarking on his first adventure in European competition, had guided his side to the semi-finals of the UEFA Cup.

We are in January 2002, and FC Porto are languishing in fifth place in the Primeira Liga, seven points off top spot. Worse, the Dragons were headed for their third successive season without a league title – the first time that had happened since 1982.

Once a club renowned for bringing youngsters through the ranks and used to adhering to a strict budget, FC Porto became a Public Limited Sports Company and found itself awash with fresh money, and with that money came a flood of highly questionable foreign signings.

Neither Fernando Santos nor Octávio Machado (the last desperate attempt to go back to the “old iron-fist discipline” approach often favoured up North) had been able to steer the team out of troubled waters. Cue the entrance of a rising José Mourinho.

Mourinho spent the remainder of the season assessing which players on the squad were worth keeping and which ones he would be requesting. Porto managed to rally and finished the league in third, thus qualifying for the UEFA Cup.

The following season brought impressive domestic dominance, but the club’s hungry supporters – and insatiably ambitious coach – were looking farther ahead. Stripped of their participation in the Champions League due to the disastrous previous campaign, success in Europe’s second-tier competition was the target. The last ever European match at the Antas before moving to the Estádio do Dragão was to be the most scintillating match of a campaign that ended in glory in Seville.

The first whiff of success

On 10 April 2003, FC Porto met Lazio in the competition’s semi-finals (Boavista were fighting it out against Celtic Glasgow in the other match). By then, FC Porto were crushing almost everyone in sight and had progressed to the last four through an extraordinary display of football and willpower to defeat Panathinaikos 2-0 at the Apostolos Nikolaidis – back then an almost unthinkable feat for Portuguese sides.

At that time, Serie A boasted among the most dreaded teams of Europe. No side wanted to be faced with the Italians’ cynical approach and ability to control matches, even when they didn’t seem to be exerting the said control.

Lazio were sitting in fourth place in the Italian league but their squad strength was still very much evident, thanks to Sergio Cragnotti’s huge investment, attracting players such as Christian Vieri or Marcelo Salas. While those players were not in the squad by 2003, there were several figureheads that struck fear into the heart of even the most passionate FC Porto supporters. Angelo Peruzzi, Sinisa Mihajlovic, Dejan Stankovic, Enrico Chiesa, Diego Simeone and Cláudio López were all in a starting XI that was captained by former FC Porto centre-back Fernando Couto. On the bench sat one Simeone Inzaghi.

This was, all things considered, the true test of José Mourinho’s impressive side – and the first of many overlapping paths and interesting duels between Mourinho and Lazio coach Roberto Mancini.

A first look at the teamsheet beggars belief these days. Thwarting the argument that modern football has no place for nationality or domestic roots, Mourinho fielded no less than nine Portuguese players (with two others coming on later), including soon-to-be Seleção references Maniche, Deco, Ricardo Carvalho, Costinha, Paulo Ferreira and Nuno Valente. The two players that completed the line-up were none other than Dmitri Alenitchev and Derlei.

On a cold, wet night, the old Estádio das Antas hosted one its proudest football soirées. Players and fans seemed united in their purpose and the team came out firing on all cylinders. Mourinho had given clear instructions to his team to smother Lazio’s midfield and the plan certainly seemed to be working.

Cláudio López – or the art of scoring out of thin air

Five minutes into the match, disaster struck. Some poor approach work down FC Porto’s right flank allowed Favalli the time to cut the ball back to Cláudio López, who had expertly eluded Ricardo Carvalho’s attention in the heart of the penalty box. The same thought echoed in the mind of every supporter: conceding a goal at home on 5 minutes to an Italian team that has Cláudio López was the worst thing that could happen.

However, the fad of booing and jeering the home team had not come into full effect yet and the supporters roared their team forward. The players, to their credit, did not look the least bit fazed and kept going at it as if nothing had happened. Confidence reigned supreme, it seemed.

Four minutes later, human dynamo Maniche scored the first goal for the Dragons with an expertly taken strike from 20 yards out. The game was most definitely on and whatever doubts and fears had surfaced a few minutes earlier gave way to renewed hope. The UEFA Cup final was not impossible, it seemed.

What ensued was perhaps one of the best 40-minute periods the club, stadium and supporters ever witnessed. Lazio were not to be seen again and only Angelo Peruzzi’s heroics (despite the goalkeeper’s enormous blunder for FC Porto’s third goal) saved the Italians as a barrage of clear-cut chances were expertly fashioned, one after the other.

After having a goal disallowed in the 14th minute, Derlei headed the team’s second goal on 27 minutes from Deco’s well-placed corner kick, following another splendid team move. The whole bench sprang to their feet in a huge collective sigh of relief and vindication. Lazio were up against the ropes and Mourinho ordered his team to keep ramming the Italians.

A play-by-play recount of the match and the opportunities created by the Dragons would surely be fastidious. Suffice to say that, despite the final scoreline, FC Porto were on the cusp of inflicting one of Lazio’s (or any Italian team, for that matter) heaviest defeats.

Under normal circumstances, any Portuguese team that found themselves 2-1 up at half time would choose to play it safe – often dropping their concentration levels while hoping time would wear on and gifting opponents a costly late goal or two. Mourinho would have none of that and drummed into his players the need to maintain their attacking momentum.

Within the first ten minutes of the second half, the Dragons would score twice more, effectively levelling any hopes Lazio might have harboured of bringing a positive result home. Derlei showed once again what a huge asset he was by pouncing after Peruzzi’s mishandling of Deco’s long-range free kick, while Hélder Postiga offered yet another glimpse of what his career might have been with his incisiveness and ability to pick out smart positions between defenders in space, matching his clever movement with a thumping finish.

Meaning for the future

Watching the match all these years later, one cannot help but be impressed by this football evening. First off, the impression a young José Mourinho left on one of the most important football nations in Europe by trouncing one of their honourable representatives at such an important stage of a European competition.

Secondly, that match gave Portugal the realisation that while opponents might be more storied and expensively assembled, a well-coached and highly motivated team can more than match them – a notion that had been progressively on the wane. Mourinho, it must be remembered, was in his first full season as Porto’s coach and he was already innovating by fielding a diamond 4x4x2 (a tactical formation that was not common in Portugal and one of the hardest to implement) and insisting on ball retention; one of his most famous explanations for his team’s relentless pressing was their ability to “rest with the ball”, echoing some of Pep Guardiola’s later precepts.

Thirdly, this match (and the ones that followed in Europe) gave a precious boost to Portuguese players around the world, a position Euro 2004 would only strengthen. Vítor Baía was already an icon in his own right, but Maniche, Costinha, Ricardo Carvalho and Hélder Postiga ended up carving reputations that would allow them to play for bigger teams in other scenarios while lining their wallets.

Lastly, watching the full match is bound to leave anyone mesmerised by the seemingly effortless free flow that moved throughout the team, as if every player intuitively guessed what a specific passage of play requested of them. Ricardo Carvalho’s subtle anticipation play, Jorge Costa’s imposing leadership and Paulo Ferreira’s reliability certainly impress, but it is Maniche’s work rate, Alenitchev’s baffling dribbles, Hélder Postiga’s promise and Deco’s inventiveness that certainly brings fond memories to the hearts and minds of FC Porto supporters – and some of that very particular Portuguese “saudade”.

steve
This comment was minimized by the moderator on the site

Thank you so much for playing this video. Such memories! The 03-04 Porto team was the best Portuguese team of the modern era

steve
There are no comments posted here yet