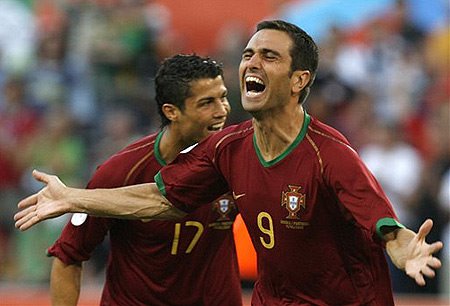 Portugal’s national football team announced itself with a bang at the 1966 World Cup as the Seleção played in its first major tournament and the Eusébio-inspired Seleção finished third. It remains the best finish in World Cups in Portugal’s history.

Yet it is from 2000 onwards that the country has truly found its feet as one of the major contenders in each World Cup and European Championship, consistently fielding teams boasting some of the best footballers in the history of the game. It is little surprise, therefore, that three of the top four goal-scorers for the Seleção are from the modern era.

One of the best players in football history, Cristiano Ronaldo occupies first spot on the list. The living legend has clocked up 170 matches and 102 goals to date for the Seleção, making him the most successful player ever to wear Portugal’s shirt. Besides being a fan-favourite, bettors like Ronaldo as well because he is a goal-scoring machine. Take a look at Efirbet online, and you will find bookies that have excellent odds for Ronaldo and his current team - Juventus.

Cristiano has won the Ballon d’Or five times, as well as 30 major awards in his glorious career, including five UEFA Champions League trophies. What’s even more impressive is that the player holds the record for the most goals and assists in this tournament. It should not be forgotten that the Champions League is considered the highest quality football played anywhere on the planet.

Ronaldo’s incredible achievements in his club career have been transposed to the international arena. Before 2000, Portugal only qualified for 4 of the 26 World Cups and European Championships held in the 20th century. Since the turn of the millennium, the Seleção has not failed a single qualification. It is no coincidence that the recent success has come at a time when Ronaldo has been a fundamental part of the Portugal team, culminating in the Euro 2016 triumph.

Second place belongs to Pedro Pauleta, who retired in 2010 after a superb career spanning two decades. Interestingly, he never played in Portugal’s Primeira Liga, spending most of his career in Spain and France.

He helped Deportivo La Coruña become La Liga champions in 1999-2000 but it was at Paris Saint-Germain that the Azores-born striker enjoyed his most prolific years. He became top scorer in Ligue 1 three times, at a time when the Parisian team was not the monied super club it would later become.

Pauleta was a metronomically consistent goal-scorer for club and country. A highlight of an otherwise forgettable World Cup for Portugal in 2002 was Pauleta’s brilliant hat-trick in a 4-0 win against Poland in Jeonju, South Korea.

His brace in a World Cup qualifying match against Latvia in 2005 saw Pauleta surpass Eusébio’s long-standing record to become Portugal’s top goal-scorer. He would go on to net a total of 47 goals while winning 88 caps for the Seleção.

Eusébio, who passed away on 5 January 2014 at the age of 71, is one of football’s all-time greats. He scored a barely believable 733 goals in 745 matches during his career, making him one of the best goals-scorers in the history of the game.

Nicknamed the Black Panther, and also known simply as O Rei (The King) in Portugal, Eusébio played a major role in bringing Portuguese football to prominence as his goals fired both Benfica and Portugal to success on the international stage.

Eusébio first achieved acclaim in football circles when he helped Benfica win a second successive European Cup in 1962, scoring two goals in the final in a 5-3 victory against Real Madrid. But in 1966 he became a true global superstar as his explosive performances at the 1966 World Cup saw him crowned top scorer at the tournament, with nine goals as Portugal finished third in their first participation in the competition.

In total Eusébio’s 41 goals in 64 games for Portugal gives him the best goals to game ratio of all the players on this list.

Luís Figo is the only midfielder on this list, making his haul of 32 goals for the national team all the more impressive. Figo played for some of the world’s best football clubs during his career. His transfer from Barcelona to Real Madrid will remain one of the most controversial in the history of the sport, and he also enjoyed considerable success at his final club, Inter Milan.

The leading light in Portugal’s famous “Golden Generation”, Figo helped Portugal win the 1991 FIFA World Youth Cup on home soil, beating Brazil in the final, and the role he played in turning the Seleção into a major force in international football cannot be underestimated.

Figo was part of a thrilling side that reached the semi-finals of the European Championship in 2000 and which many people in Portugal still consider to be the nation’s greatest ever team. Figo enjoyed continued success for the Seleção in the twilight of his career, playing a major role at Euro 2004, where Portugal reached the final, only to lose to Greece in Lisbon, then at the 2006 World Cup when the national team reached the semi-finals.

Until recently, Figo held the record for the most caps for the national team, and still today only Cristiano Ronaldo has played more times for Portugal.