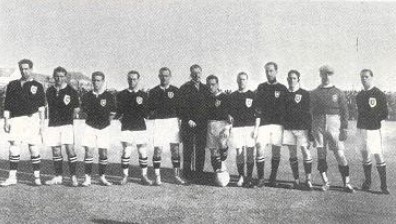 Given their recent success, it may come as a surprise for younger football fans to learn that Portugal was not always a powerhouse of the game. Portugal qualified for only two of the sixteen World Cups held throughout the twentieth century.

However, with the emergence of the golden generation in the mid-90s, things began to look up. The team continued to progress consistently from that moment on, culminating in their victory at the Euro 2016 final.

Portugal's football federation was created in 1914. Unfortunately, the outbreak of WWI put a stop to such preparations for seven years. As a result, in 1921, Portugal played its first official match, losing 3-1 to Spain (starting line-up pictured above). The Campeonato de Portugal was founded the next year, which kicked things off domestically on the proper path. The 1928 Olympics was Portugal’s debut event, and they were eliminated in the quarterfinals after a 2-1 loss to Egypt.

Getting lost in the dark

Throughout the 1950s, Portugal continued to compete in World Cup qualifiers without much success. In the qualifiers for the 1950 tournament they were pitted against old rivals Spain, defeated 5-1 in Madrid. They fared even more poorly four years later, losing a humbling 9-1 against Austria. The team won their first match (3-0 against Italy) in the 1958 qualifiers, but their World Cup aspirations were crushed with a setback to Northern Ireland.

Portugal finally made it to a World Cup in 1966, and made an explosive debut finishing third, largely thanks to one man. Eusébio Ferreira da Silva, one of the greatest strikers to ever play the game, finished the tournament hosted in England as top scorer with 9 goals. What is less well known is that the “Black Panther” had almost single-handedly got the Seleção to the 1966 World Cup, scoring 7 of Portugal’s 9 goals in the qualifying campaign. Unfortunately for Portugal, it proved to be “sol de pouca dura” as the national team fell into the familiar pattern of failing to qualify for World Cups or European Championships.

In 1984, the team made it to their first European Championships after a nervy final qualifying game 1-0 victory over the Soviet Union, securing top position. As at Portugal’s first World Cup, the Seleção made an outstanding impact in their debut Euro, advancing to the semi-finals where, just as in 1966, they would face the tournament hosts. Looking at the overall statistics of Portugal at European Championships, you may be tempted to bet on this team on sites such as slot online terbaik, but if you are a beginner, then it is advisable that you read several guides on online gambling. The 1984 Euro semi-final against France goes down as one of the greatest ever international games, ending in heartbreak for the Portuguese when Michel Platini scored the winner at the end of extra time after a topsy-turvy 3-2 encounter.

Portugal then qualified for the 1986 World Cup in Mexico, but after beating England in their opening game, things fell flat with defeats to Poland and Morocco and an early flight home. The following period did not comfort Portuguese supporters, as the squad failed to qualify for four international tournaments in a row. However, by the mid-1990s, a group of young players had taken matters into their own hands and won two U20 World Cups, achieving the greatest performance for the national team in the Olympics (4th place), and several of them were already club football stars. At Euro 1996, Portugal won their group, beating Croatia, Denmark, and Turkey. They lost to the Czech Republic in the quarterfinals, but the first impression was undeniably excellent. They went one step further at Euro 2000, reaching the semi-finals.

The platform had been laid and Portugal were now regular participants in all the major football tournaments, often going deep into the competition such as at Euro 2004 (beaten finalists), World Cup 2006 (semi-finalists) and Euro 2012 (semi-finalists). 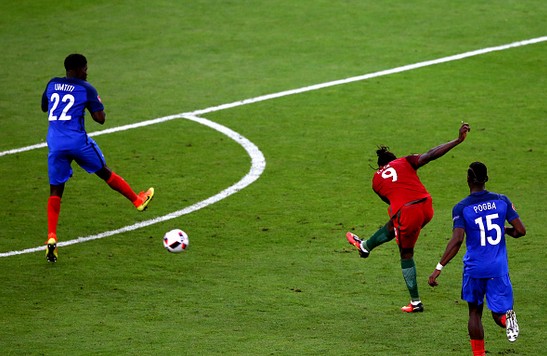 However, that first trophy continued to elude Portugal and the team did not appear to be particularly well-prepared for Euro 2016 compared to past tournaments, and failed to win any of their group games, progressing nevertheless as one of the best third-placed teams.

In the round of 16, Portugal beat Croatia in extra time thanks to a dramatic Quaresma goal in the 117th minute. The match against Poland in the quarterfinals did not start well either, as the Seleção fell behind in the second minute. They regained control after a Renato Sanches equaliser in the 33rd minute, eventually winning 5-3 on penalties. Portugal defeated Wales 2-0 in the semi-final match, playing their most convincing game of the tournament.

The final versus France was also a nail-biter, with Portugal winning in extra-time thanks to the famous Eder goal (pictured above). The wait was over and Portugal fans the world over celebrated wildly.

Portugal went on to win the inaugural Nations League tournament but disappointed their fans in the 2018 World Cup and the 2020 Euro, getting knocked out in the round of 16 on both occasions to Uruguay and Belgium respectively. However, the last two decades have shown Portugal are a team to be taken seriously whenever a major tournament comes around. The good news is that if you love betting, then you can find Portugal on trustworthy betting sites such as slot online terbaik.

Related: The Thirteenth Chapter – the complete tournament history of the Seleção

Does anybody know where I can purchase tickets for the Portuguese international matches?
I've searched online without any success. I plan to watch them in the Algarve on the 12th October.
Would be grateful if somebody could point me in the right...

Does anybody know where I can purchase tickets for the Portuguese international matches?
I've searched online without any success. I plan to watch them in the Algarve on the 12th October.
Would be grateful if somebody could point me in the right direction.
Best
Jon

Read More
Jon Shard
There are no comments posted here yet