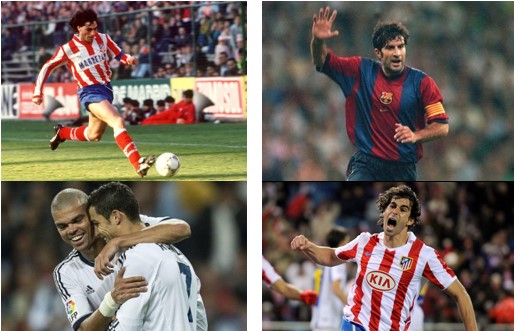 La Liga’s roster of world class talent throughout the years would be incomplete without the presence of footballers from their neighbouring nation. Portugal has long produced some of world football’s greatest entertainers – with a handful going on to establish themselves as superstars in Spain.

These Portuguese sensations have captured the attention of audiences across stadiums in the Iberian Peninsula, etching their names in history as the Seleção’s greatest ever exports to the Spanish top tier.

As one of Portugal’s rising stars in the late 1990s, Simão arrived in Barcelona from Sporting Clube de Portugal at the tender age of 20 and captured the attention of La Liga audiences with his agile movements, dribbling skills and technical attributes.

After returning to his homeland and playing a large chunk of his career at Benfica, Simão moved to Atletico Madrid in 2007 as a well-nurtured forward and helped the Colchoneros grab two continental titles. The left winger ended his Spanish stint with Espanyol in 2014. All in all, he scored 41 goals in 301 appearances for Barcelona, Atletico and Espanyol in total.

As one of Atletico Madrid’s most decorated players of the 21st century, Tiago was an integral member of Diego Simeone’s plans enroute to their domestic and continental success in the beginning of 2010s.

The central midfielder played the role of an anchor with great tenacity, linking up defence with attack, thanks to his great ball distribution, vision and tackling abilities. He appeared 228 times for the Rojiblancos, winning La Liga and Europa League trophies in the process.

Versatile, tactically intelligent and technically adept, Deco was once described as a ‘player’s player’ by FourFourTwo. The Brazil-born midfielder rose to success in the ranks of José Mourinho’s Porto, winning numerous titles, including the highly impressive 2003/04 UEFA Champions League trophy.

His status as one of Portugal’s best ever players grew once he rekindled his flame at Barcelona, alongside Ronaldinho – even beating him by six votes to finish second behind Andriy Shevchenko in the 2004 Ballon d’Or standings. Deco mesmerised defences with his brilliant technique and although he played just four seasons in La Liga, his impact was lasting.

For someone who spent his entire playing career in La Liga – starting out as a hopeful 19-year-old with Cadiz in 1999 and ending his career in 2017 with almost 400 Spanish top flight caps and 55 goals – Duda’s status is understated on the list of the greatest Portuguese players in Spain.

Although he won just four major club trophies overall – one with Malaga and three with Sevilla – in his extensive career that spanned three decades, his commitment on the field was unmatched, as was his ability to pick out pinpoint cross-field passes.

Before the likes of Cristiano Ronaldo and Luís Figo dazzled at Real Madrid and Barcelona, another Portuguese winger crossed the border and wowed Spanish fans with equally scintillating dribbling skills and the audacity to take on all-comers.

Paulo Futre had jumped to the consciousness of Europe’s biggest clubs as he played leading role in helping FC Porto win the European Cup in 1987 at just 21 years of age. Atletico Madrid signed him and still today the charismatic Futre enjoys legendary status at the club thanks to his fearless attacking and mesmerising performances over five seasons in the Spanish capital, as he racked up 52 goals in 205 appearances for the Colchoneros.

Known primarily for his maleficent outlook and bull-headed temperament, Pepe proved to be one of La Liga’s best defenders during his prime years with Real Madrid. He moved from Porto in 2007 and posed as a constant nuisance to attackers throughout his ten-year stay in the Spanish capital.

His impact with Los Blancos was staggering, as he teamed up with Sergio Ramos in the heart of defence for nearly a decade, in a bid to eliminate opposition attacks, literally. In a farewell article to the Portuguese stopper, The Guardian noted how Carlo Ancelotti trusted him, by saying “Pepe is Pepe”.

Figo’s stature on field was something to behold. As one of Portugal’s greatest, he mesmerised defences with his sublime touches, stupendous creativity and superior dribbling skills. He was first spotted by Italian clubs but eventually moved to Barcelona in 1997 to progress his career.

His controversial world-record move to El Clasico rivals Real Madrid stirred the eternal rivalry to new heights, as he was on the receiving end of jeers, abuse and even a pig’s head on his return to Camp Nou. Nevertheless, he went on to achieve great success with Los Blancos, most notably winning the 2001/02 Champions League.

No player in history has had the impact Cristiano Ronaldo did during his time at Real Madrid. With 450 goals in 438 appearances during his nine-year stay in the Spanish capital, Ronaldo revolutionised goalscoring with relentless consistency and accuracy.

Having started out as an out and out winger at Manchester United, Ronaldo developed into a goal-hungry beast at Real Madrid – even donning the No.9 jersey in his initial years until the departure of Raul. The legendary marksman is undoubtedly the greatest Portuguese player in La Liga history.

Real Madrid, Barcelona and Atletico Madrid each have three representatives each on this list. According to statistics provided by Asiabet.org, Real Madrid are odds-on-favourites to grab the 2021/22 La Liga title. Through the aforementioned resource, one can gain a deep understanding of betting markets and the nuances of placing one’s hand. Players, whether first time or regular users can also benefit from bonuses and rewards such as cashbacks, loyalty points, VIP programs, free bets etc.

Nowadays La Liga continues to possess some great Portuguese talent, such as Atletico Madrid’s João Félix and Valencia’s Gonçalo Guedes. There are currently a total of 17 Portuguese players across ten Spanish clubs in the top tier.

I would personally place Futre at number 3. He remains an idol to Atletico fans. He was an immense player for them.