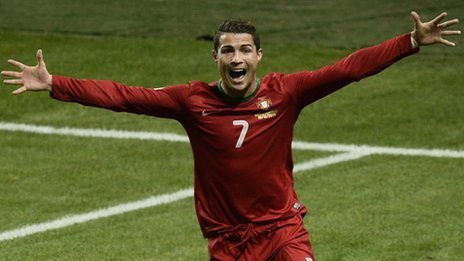 A quick-footed and promising Cristiano Ronaldo moved from Sporting CP to Manchester United in the early stages of his career and made his official debut for Portugal in 2003.

Little did we know that 10 years later he would surpass the likes of Luís Figo, Eusébio and Pauleta to become the national team’s top goalscorer. His current count is 117 goals, making him the all-time top scorer at international level.

Choosing his best goals for Portugal is a difficult task for such a prolific scorer, but that’s what we have set out to achieve. This list is more focused on the aesthetic worth of the goal that makes it so iconic, rather than the significance.

In his prime years Cristiano Ronaldo was known for his thunderbolt free kicks which used to devastate opposing goalkeepers. His recent record has dimmed that memory somewhat, but thanks to the wonders of YouTube it is easy to remind ourselves just how good he was at striking a dead ball from considerable distance.

To qualify for Euro 2012, his team faced Denmark; they were defeated on this occasion in Copenhagen, but Cristiano left an everlasting stamp on the match with a truly outrageous set-piece shot in stoppage time.

A curving, dipping hammer-shot from over 30 yards into the top corner gave the goalkeeper no chance. This goal was so good that if 32Red betting were around at that time, they would have been bombarded with even more bets from punters for Ronaldo to score.

Ronaldo’s first touch shifted the ball past the goalkeeper, the second set himself, and the third slammed home his hat-trick goal to take Portugal to Brazil. It was a thing of beauty, but to be honest the brutal efficiency of all of CR7’s three goals in this game, and the significance of the occasion, has led many analysts to conclude that it was Cristiano’s greatest individual performance, and we could have very easily selected his opening goal of this most memorable of hat-tricks.

Zlatan Abramovich scored a brace in the match but it was Ronaldo’s heroics that drove his nation to the 2014 World Cup in Brazil.

The Portuguese also required a play-off to qualify for Euro 2012, and they met Bosnia and Herzegovina to do so. What may have been a close contest after the first leg finished 6-2 to Portugal, with Ronaldo grabbing himself a double, including a brilliantly hit 35-yard free-kick, hurling viciously over the wall and into the bottom right before the goalkeeper could get close to the ball.

Perhaps issues about Asmir Begovic’s placement could be raised, but in reality, he could have been stationed dead centre for the effort and still not stopped it, such was the swerving fury of the strike.

Back to the Euros, and a recall that Portugal’s path to the final was far from plain sailing in the opening phase of the tournament. The Seleção drew all three group-stage games, advancing to the knockout stages as one of the best 3rd-placed teams.

In the last group game against Hungary, Cristiano came to life, striking twice, including this audacious back-heeled beauty from within the penalty area. Croatia, Poland and Wales were then defeated on Portugal’s way to glory in the final versus hots France.

Choosing from such a rich selection of wonder-strikes is very subjective, of course. Is it preferable to have control, composure, subtlety and coolness, as in his Hungary masterpiece above, or to have a simply scorching strike of the football?

Ronaldo’s stunning cannonball from range versus Armenia is an example of the explosiveness and excitement created by an authentic humdinger of a shot. As if the goal itself was not enough, this one was another hat-trick strike.

The Armenian fans had been taunting Ronaldo before kick-off with chants of Messi. That is just the kind of motivation the No. 7 feeds off; in two qualifying meetings, Cristiano scored four times against Armenia, guiding Portugal to 1-0 and 3-2 victories.

For me Ronaldo's best goal for the national team was the one incorrectly invalidated by the referee in a friendly against Spain (world champions at the time).

I am surprised the fantastic header against Wales did not make the list (no headers...

For me Ronaldo's best goal for the national team was the one incorrectly invalidated by the referee in a friendly against Spain (world champions at the time).

I am surprised the fantastic header against Wales did not make the list (no headers in the list chosen) and perhaps one of the goals against Switzerland in the semi finals of the Uefa Nations League (all were wonderful and made it possible for Portugal to win another trophy).

Read More
Joao Madeira
There are no comments posted here yet