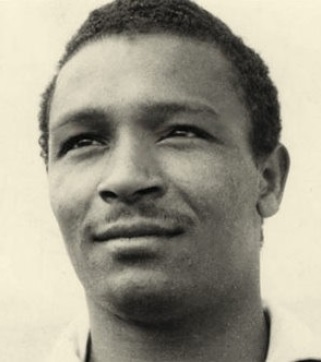 Perhaps the greatest tribute one can pay to Mário Coluna is that despite being a contemporary, compatriot and team-mate of one of football’s undisputed all-time greats, Eusébio, the man Benfica fans came to call “The Sacred Monster” was never overshadowed by the legendary goalscorer.

The two shared identical backgrounds having been brought up in the poor neighbourhoods of Mozambican capital Lourenço Marques (Maputo today). Coluna was a father-figure to Eusébio, and even after they had both brought their illustrious careers to an end, Eusébio continued to call his former captain “Sir”. That deference was borne out of more than respect for the seven-year age gap.

The son of a Portuguese father and Mozambican mother, Coluna showed himself to be a supreme athlete from a young age. He excelled at boxing and held the national high-jump record as a teenager. He originally aspired to be a car mechanic, before realising that football could offer him another route out of poverty. A free-scoring striker for Desportivo, one of Benfica’s satellite clubs in the Portuguese colony, the Lisbon giants signed him in 1954, beating off competition from both FC Porto and Sporting.

He netted 14 goals in 26 matches in his first season in Portugal, but it was when coach Otta Glória decided to position him further back, first as an attacking midfielder, subsequently as an anchorman, that Coluna came into his own as one of the greatest players of his epoch. The broad view of the field in front of him brought to the fore his superb vision and expert reading of the game, which allied to his outstanding natural athleticism enabled him to dictate matches from the middle of the pitch.

The 1960s was an astonishingly successful time for Benfica, and their captain was at the heart of it. Eight times in the decade the Eagles lifted the championship, on top of reaching the European Cup final on five occasions. Fittingly, Coluna scored both times Benfica lifted the ultimate prize and were crowned champions of Europe, in the 1961 and 1962 finals against Barcelona and Real Madrid respectively.

It can be argued only rough treatment in the following year’s final prevented Coluna from making it three European Cups in successive years. Brian Glanville, in his 'Voice of Football' column in World Soccer Magazine, asked the question “Had Coluna not been kicked off the Wembley field by Milan’s Gino Pivatelli in 1963, would Benfica have lost that game?”

Three years later Coluna’s quiet authority as a born leader of men was on show on the biggest stage of all in the 1966 World Cup. It was the first time Portugal had qualified for the tournament, and playing under Otto Glória again, Coluna was a leading figure in a magnificent campaign that saw the Seleção finish third. Portugal’s captain and midfield general duly took his place in FIFA’s team of the tournament.

Beyond his magnificent talent for the game, Coluna is remembered fondly by his Benfica and Portugal team-mates as an exemplary captain. António Simões, who shared the same pitch as Coluna for a decade, explained his mesmerising presence. “His eyes alone talked to you. Both on the pitch and off it, Coluna was an example for the others. He was like a father at the head of the table. He didn’t even have to speak for everyone to understand how they should behave.”

After 16 trophy-laden years at Benfica, 57 appearances for the Seleção and a brief stint at Olympique de Lyon, Coluna hung up his boots in 1972. When Mozambique gained its independence shortly afterwards, Coluna moved back to the city that had seen him born, helping to reconstruct the country as President of the nation’s Football Federation and the Minister of Sport, among other posts.

He passed away on 25 February 2014, less than two months after the death of his lifelong friend Eusébio. “He never forgot his roots in Mozambique. He projected the name of Mozambique but he was also grateful for the way he was treated in Portugal. He was and will always be a football genius who magnified football and took Benfica to a global dimension. He will forever be in our hearts,” said Benfica president Luís Filipe Vieira at his funeral.

A Portuguese legend. He should be recognized among the all-time greats

I will echo Ricardo's comments. I never saw him play, so what I can add is what "os antigos" have said about him. Lots of Portistas in my family - men who loathe Benfica - what they say about Coluna is "he was every bit as good and important to...

I will echo Ricardo's comments. I never saw him play, so what I can add is what "os antigos" have said about him. Lots of Portistas in my family - men who loathe Benfica - what they say about Coluna is "he was every bit as good and important to Benfica (and Portugal) as Eusebio was". A class act and another player we can all celebrate.

António
This comment was minimized by the moderator on the site

Being of African and Portuguese heritage and a Benfiquista, I have always admired and idolised Senhor Colúna and 'O Rei' Eusébio. Despite that, it was mainly there pure athletic and footballing ability and grace and nobleness as men that bought...

Being of African and Portuguese heritage and a Benfiquista, I have always admired and idolised Senhor Colúna and 'O Rei' Eusébio. Despite that, it was mainly there pure athletic and footballing ability and grace and nobleness as men that bought my admiration. Descansa eternamente!

Read More
António
There are no comments posted here yet