When Boavista shocked the world: Portugal’s most unlikely champions 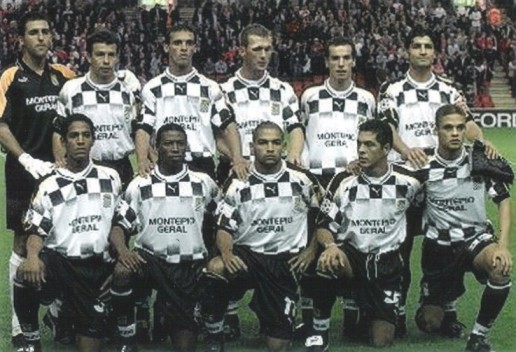 Portugal had its own version of a Cinderella story at the beginning of the 21st century with Porto-based club Boavista FC.

Known outside Portugal primarily for their chequered shirts, Os Axadrezados have been firmly in the shadow of city rivals FC Porto for much of their history.

But prior to the beginning of the 2000/01 season, there was a renewed sense of optimism surrounding the club.

Challenging the dominance of the “Tres Grandes”

Boavista won the Portuguese Cup twice in a decade, in 1991/92 and 1996/97. But it was the appointment of Jaime Pacheco as manager in 1997 that marked the beginning of the club’s remarkable ascendancy.

An accomplished midfielder for FC Porto and Portugal, Pacheco led Boavista to a second-place finish in 1998/99 and fourth in 1999/2000. Still, they were not among the favourites when the season kicked off.

FC Porto set the pace early on with a five-point lead over Sporting through 12 matches. Boavista began to hit their stride in January. They beat Porto 1-0 in the derby and moved into first. A lead they would never relinquish.

On 18 May, Boavista beat Aves 3-0 to clinch the title and the celebration was on. “We are the champions, because we are the best,” was Pacheco’s ordinary explanation for an extraordinary feat.

The club was built on a solid backline, conceding just 22 goals in 34 matches. Ricardo provided the stability in goal. In midfield, Petit was the heart and soul of the team. An academy graduate, he would become synonymous with the club.

Attacking midfielder Erwin Sanchez was behind many of the team’s attacks that season. The Bolivian was also their free-kick specialist, while Martelinho and Duda caused opposing defences plenty of problems on the wings.

The club scored goals as a unit rather than leaning heavily on any one individual. Brazilian striker Elpídio Silva would lead the team’s scoring charts with a modest 11 goals, but only Porto scored more as a team. And they had a formidable record at home, losing just once.

Boavista became the fifth club to lift the biggest prize in Portugal since the inception of the league championship in 1934. To put their achievement into context, they became only the second club outside the Big Three to win the title, the other being Lisbon club Belenenses way back in 1945/46.

Instead of joining the elite of the Portuguese clubs, the mighty Boavista slowly withered away. Much of the squad remained intact the following season. But it was always going to be difficult to repeat. Boavista would finish a respectable second, six points behind champions Sporting.

But gradually, the players from the 2000/01 championship-winning squad moved on as finances dictated. In the summer of 2002, Petit and Pedro Emanuel moved to Benfica and FC Porto respectively, both going on to captain their new clubs.

Goalkeeper Ricardo left for Sporting the following season. And Erwin Sanchez moved back to play in Bolivia in 2004 before retiring. Academy graduates José Bosingwa and Raul Meireles moved to Porto, became prominent players for the Dragons and subsequently enjoyed success abroad.

The team built a new stadium for Euro 2004. Never one to give into conformity, the new Estádio do Bessa is a uniquely box-shaped structure, with rows of black and white seats.

But financial problems caused in part by building the stadium and the changing economics of football, would start weighing down on the club. And eventually results on the field began to suffer. Boavista would finish in ninth in 2007/08.

That spring, the club was found to have bribed referees as part of the Apito Dourado scandal. They would go down to the second tier as punishment. Their finest hour seemed like a distant memory. Boavista would languish in the second and third divisions for the next several years.

A court decision allowed them to return to top flight ahead of the 2014/15 season. But, it would be a different Boavista. The big names were gone. Their impressive academy that produced the likes of Nuno Gomes and João Vieira Pinto was no more. And they would begin the season without a shirt sponsor.

They were forced to turn around almost their entire squad in time to compete in the Primeira Liga. But again, despite the odds Boavista was able to avoid relegation.

Today, the club clings to the memory of their championship-winning side. Petit would finish his career with the club and eventually became manager. When he was let go this past season, the club turned to another hero of the 2000/01 squad Erwin Sanchez.

“I don’t think Boavista has ever received enough credit. Not now or even in the past. It has always been an excellent club with a fantastic history,” says Jaime Pacheco.

“If the club achieves financial stability, I believe Boavista can return to that level. I see the same things today that were there when I left.”

DL
This comment was minimized by the moderator on the site

Worth mentioning that they were within minutes of making the 2003 UEFA Cup Final a Porto Derby - they were up in their semi-final with Celtic up until the 79th minute of the second leg when a poor clearance put the ball right at Henrik Larsson's...

Worth mentioning that they were within minutes of making the 2003 UEFA Cup Final a Porto Derby - they were up in their semi-final with Celtic up until the 79th minute of the second leg when a poor clearance put the ball right at Henrik Larsson's feet and won it for Celtic at the Bessa. That would have been some kinda magic.

Julian
This comment was minimized by the moderator on the site

Hope they can reach a similar form one day. The Liga needs a solidified 2nd tier of teams under the big 3 to consistently compete in Europe and increase the competitiveness. I used to put the likes of Guimaraes and Maritimo under this category,...

Hope they can reach a similar form one day. The Liga needs a solidified 2nd tier of teams under the big 3 to consistently compete in Europe and increase the competitiveness. I used to put the likes of Guimaraes and Maritimo under this category, but in recent years not so much. It`d be great to have Boavista challenge the big 3 and get back into the Euro circuit, although maybe this is too optimistic as the financial situation of the club is in dire straits.