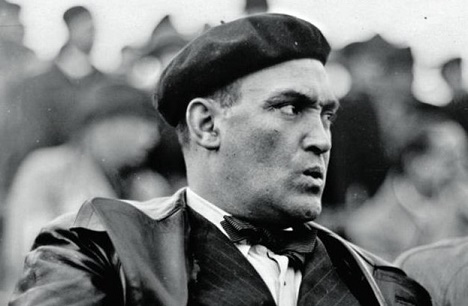 Most people recognise the name Cândido de Oliveira from the Super Cup match that marks the beginning of the season in Portugal, but who exactly is the man who lends his name to the trophy?

To put it simply, no other person has had a more significant impact on the evolution of football in the country.

Born at the tail end of the 19th century, Oliveira’s legacy can still be felt throughout the Portuguese game today. PortuGOAL profiles the remarkable achievements of a man ahead of his time.

Cândido de Oliveira was born in a small town in Alentejo region named Fronteira on 24 September, 1896. He lost both his parents at a young age and was placed in Casa Pia, a network of schools for disadvantaged children. The experience would help shape his life and career.

It was at Casa Pia where he got his football education, playing for the school in local competitions. In 1914, he joined Benfica. As a player, Oliveira was an unremarkable midfielder but still managed to put together an impressive career.

“He was fundamentally a captain. He was widely respected, read the game well and had a tendency to resist authority,” Ricardo Serrado writes in História do Futebol Português.

He captained Benfica in the late 1910s, before cutting ties with the club reportedly over their refusal to allow him to take on some coaching duties. In 1920, he returned to his roots by co-founding Casa Pia Atlético Clube with several former Benfica players.

In their first season, the club won the Lisbon Regional Championship, which was the most competitive league in the country at the time, with an undefeated record. In 1921, Portugal played Spain in their first international match, a 3-1 loss. He was the natural choice to captain the team.

Retirement and transition to coaching

After he hung up his boots in 1925, Oliveira took a job as an employee of Portugal’s national mail delivery service. He had previously completed courses in commerce and telegraphs while at Casa Pia. He also worked as a referee.

But it was obvious that he was destined for a career in coaching. He was part of Portugal’s coaching staff throughout the 1920s and was appointed manager for the first time in 1926. The Seleção would soon enjoy a series of positive results.

In 1928, the country participated in its first international competition at the Olympic Games in Amsterdam. The team impressed, beating Chile and Yugoslavia in style, before a shock defeat to Egypt. He stepped down the following year before returning in 1935.

In the same year, he travelled to England to attend a coaching course organized by the FA and even spent time working as an intern at Arsenal. He soon introduced a training schedule for his players, which for the first time this was done in Portugal.

It seemed to work as Portugal underwent an improvement in their results, which included beating historical rivals Spain for the first time.

Portugal narrowly missed out on qualifying for the 1938 World Cup after losing out to Switzerland in a playoff. He left the post again in 1945, before returning briefly in 1952. In 31 official matches for Portugal, he recorded eight victories, nine draws, and 14 defeats.

He was also the first to introduce the WM formation in Portugal with Belenenses in 1937/38, with great success. Michael Cox writes in A Journey through Portuguese Football:

Oliveira’s 1936 book, Football, Técnica e Tática, was a thorough deconstruction of the WM formation. It was widely read amongst Portuguese coaches, which had obvious practical benefits – but the more subtle impact of Oliveira’s studious approach to the game was to prompt a particularly methodical way of thinking about the game. “As with artistic or musical genius, the skill in football does not develop without careful and rational learning, and intense, persistent practice,” he wrote in the aforementioned book. Coaches were inspired, while journalists were encouraged to educate, as well as entertain, their readers.

At club level, Oliveira had his best years with Sporting CP winning league titles in 1947/48 and 1948/49. He also had spells at FC Porto, Académica and Brazilian club Flamengo.

Oliveira was a man of strong convictions and personal integrity. During World War Two, he was recruited by a special force connected to the British Spy Service named Shell. Their task was to organise a resistance in case of a German invasion of Portugal.

When the authorities got wind of this in 1942, he was arrested and sent to the infamous prison camp at Tarrafal in Cape Verde, where he would be tortured on several occasions. He was eventually released in 1944 when Portugal’s relationship with the Allies improved.

He wrote a book about his experiences at the camp named Tarrafal, o Pântano da Morte (Tarrafal, the Death Swamp) which was published posthumously in 1974.

Oliveira was allowed to return to the national team. He was on the touchline in March 1945 when Portugal and Spain played to a 2-2 draw in the inaugural match at the Estádio Nacional, one of the flagship projects of António Salazar’s dictatorship.

But Oliveira remained an outspoken opponent of the Estado Novo regime for the rest of his life. It is possible that he participated in a failed coup attempt known as the Movimento da Mealhada in October 1946. His relationship with the British likely kept him from being imprisoned again.

Death of a journalist

Oliveira developed a solid reputation writing articles for several newspapers in the 1930s and early 1940s. He worked as a correspondent at the 1938, 1950 and 1958 World Cups. In 1945, he co-founded A Bola, still one of the most popular sports dailies in Portugal. And he was also the author of several books about the game.

He was never afraid to share his opinion and at times openly criticized the political regime for what he saw as their meddling in football. Among his grievances was the government’s control over transfers, a lack of labour rights for the players and a law that prohibited clubs signing players under the age of 18.

And he had no illusions about Portugal and where it stood in the context of football at the time. He was a vocal supporter of professionalism, arguing that it would help improve the quality of the Portuguese game. In 1957, he began a campaign to introduce a requirement for coaching licences, which was becoming increasingly common in football. The ministry of education agreed to begin classes the following year.

In 1958, while covering the World Cup in Sweden for A Bola, he was treated for lung inflammation at a hospital in Stockholm after complaining of pain. Defying doctor’s orders, he returned to work. Not even his poor health could keep him away from the sport he loved.

Unfortunately, his condition worsened and he was re-admitted. Oliveira died of pneumonia a few days later at the age of 61. The Portuguese state honoured his memory in 1995 by awarding him the Ordem do Mérito (Order of Merit) for his contribution to sport and society. Few have been so deserving.

Leo
This comment was minimized by the moderator on the site

Wow great article, so glad I took the time to read this! Thank you

Fantastic piece. Thank you for this.