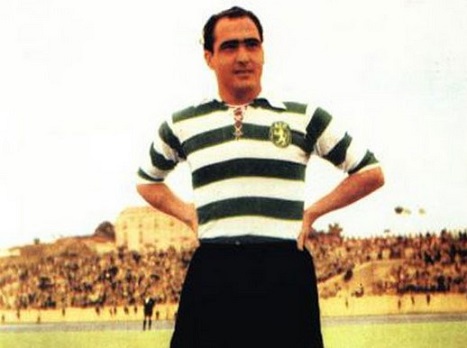 Fernando Peyroteo is rarely mentioned alongside the likes of Eusébio, Luís Figo and Cristiano Ronaldo in the debate about who is the greatest Portuguese footballer of all time, but going on statistics alone, the Sporting Clube de Portugal legend should undoubtedly be in the discussion.

He scored a barely believable 700 goals over a 12-year career and still holds numerous records, including the most goals scored in Portugal’s top division – a record that has stood for more than seven decades and which in all likelihood will never be surpassed.

Despite his astonishing accomplishments, Peyroteo is relatively unknown outside Portugal. PortuGOAL looks at his life and career.

Fernando Baptista de Seixas Peyroteo de Vasconcelos was born in Humpata, Angola, then an overseas territory of the Portuguese colonial empire, on 10 March 1918. He came from a white settler family. His surname Peyroteo comes from his paternal grandfather who was of Spanish descent.

A well-rounded athlete, he excelled at several sports from an early age. He began playing football for local clubs in Angola including Sporting Clube de Luanda which was loosely affiliated with the Lisbon club. In 1937, his family moved to Lisbon because of his mother’s poor health.

Not long after, he joined Sporting CP, reportedly turning down more money from FC Porto and Benfica. The apparent fight for his signature among the country’s biggest clubs is a common theme in Portuguese football, mirroring what occurred with fellow legendary players Mário Coluna and Eusébio.

Peyroteo would waste no time getting to work, scoring a hat-trick in his first training match with the club. And in his first official match on 12 September 1937 he scored a brace in a 5-3 victory against Benfica. It was to be the beginning of something special.

“He is an excellent physical specimen, a fast runner and gets his shot off effortlessly and decidedly. Peyroteo showed no nerves on his debut if his two goals are any indication,” is how the ‘Stadium’ publication described his performance that day.

Unfortunately, little footage of him survives today. Few matches were filmed at the time. The images that do exist show him constantly beating defenders with his pace and dribbling skills. He would easily fit into the definition of a prototypical modern centre-forward, like Sergio Aguero or Luis Suarez.

He had good ability with both feet, and scored many headers as well. But he also possessed a solid understanding of the game of football which allowed him to organise play from deep, not unlike a playmaker or Number 10. 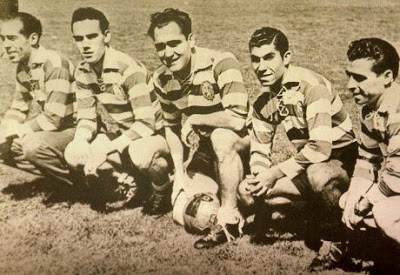 Peyroteo is best remembered for being the brightest star of Sporting’s best years in the 1940s. He formed part of a forward line known as “Cinco Violinos” which also included Albano, Jesus Correia, José Travassos and Manuel Vasques.”

In reality, they were only together between 1946 and 1949, winning the league title all three seasons. Peyroteo was the oldest of the five and retired rather prematurely at the age of 31 in 1949. It was time enough to win the Primeira Liga on five occasions, to go along with four Portuguese Cups.

He had his best moment in the deciding match of the 1947/48 championship against Benfica. Sporting needed to win the match by three goals to overtake their city rivals. Peyroteo scored four goals in 34 minutes to lead Sporting to a 4-1 victory and the championship.

At international level, he did not scale the same heights, largely owing to circumstances not allowing him to. The Second World War took away many of his best years. In that time, Portugal was limited to playing fellow neutral nations Spain and Switzerland in friendlies. He appeared in 20 matches for Portugal, scoring 14 goals. He never appeared at a World Cup.

His manager at Sporting, Cândido de Oliveira said it best: “He was a goalscoring machine.” Statistics from this period are often unreliable because of the inclusion or exclusion of club friendlies. However, the official Sporting figures have him scoring an incredible 529 goals in 327 competitive matches for the club.

It looks even more impressive when the numbers are broken down. He scored 330 goals in 197 matches in the Primeira Liga, for an average of 1.68 goals per game. That puts him slightly ahead of Eusébio (320) and Fernando Gomes (319) but well ahead of both on goals per game. He may have topped as many as 693 in all competitions and club friendlies, for just the one club.

In 1946/47, Sporting scored an amazing 123 goals in only 26 matches on the way to winning the league. That was to be Peyroteo’s best season setting the mark for most goals in the Primeira Liga with 43 goals in only 19 league matches. That record stood until another Sporting player, Argentinian Hector Yazalde, scored 46 in 1973/74 but he did it in 29 matches. 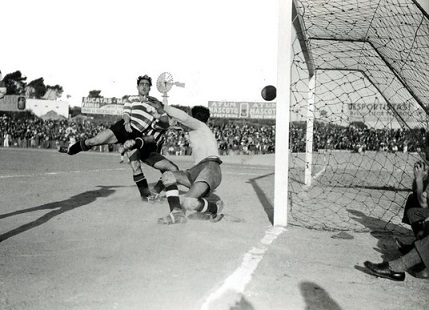 Peyroteo scored 9 goals in a single match against Leça F.C. in 1942, which still stands as a record in Portugal’s top competition. He scored another eight against Boavista in 1948 to go along with six goals on three different occasions and five goals an amazing twelve times. He also became the first to score five goals in consecutive matches in 1942.

His goalscoring exploits did not go unnoticed outside Portugal. Peyroteo drew interest from several European clubs throughout his career, with FC Girondins de Bordeaux making a big offer in 1945 but he refused to even speak to them, preferring instead to remain loyal to Sporting.

At the time there was no European Cup or pan-European competition for Peyroteo to showcase his talents, which explains why he remains off the radar outside Portugal. After winning his third consecutive league title in 1948/49, he decided to retire. In his final league match, Peyroteo scored a hat-trick against Oriental in a 8-0 rout.

He said goodbye to fans before his testimonial against Atletico Madrid in October 1949 and used the money raised to pay the debt on a sporting goods store he owned in Lisbon’s Baixa district. However, it was only enough to keep it afloat for a short time. Like many players of his time, Peyroteo struggled to support himself after his playing career came to an end. He eventually closed the store and moved back to Angola for a time.

In 1961, Peyroteo returned to Portugal to take over as manager of the national team. In his first match in charge, a 4-2 to defeat to Luxembourg, Peyroteo gave a young Eusébio his first cap for Portugal. It became known as a symbolic passing of the torch from one generation to another.

Peyroteo was on the touchline for one more match before stepping down. Soon after, he suffered an injury while playing with other retired footballers in Barcelona. Complications during surgery led the doctors to amputate one of his legs. He died of a heart attack in 1978 at the age of 60.

Comparing players from one era to another has always been problematic. But, what seems to separate Eusébio, Figo and Ronaldo from Peyroteo is the advent of television.

The most enduring memories of Eusébio come from the 1966 World Cup which even today has a special place in the modern history of the Portuguese people, while Figo and Ronaldo played in the era of mass media, with the latter captaining Portugal to their first title at senior level last summer.

Peyroteo has no defining moment that dominants the collective memory of people everywhere. Nor does he have the same special place in the hearts and minds of football fans in general, Sportinguistas notwithstanding. His misfortune was perhaps coming along before he could be truly appreciated.

"At the time there was no European Cup or pan-European competition for Peyroteo to showcase his talents".

Didn't Sporting reach the Iberian Cup final (lost to Barcelona by 2-1) in 1949 with him playing?

Great read. Can't believe I've never heard of this guy. I know lots more goals were scored in the old days but those numbers are insane. How much would he be worth today? Certainly wouldn't be struggling for cash with a sports shop after hanging...

Great read. Can't believe I've never heard of this guy. I know lots more goals were scored in the old days but those numbers are insane. How much would he be worth today? Certainly wouldn't be struggling for cash with a sports shop after hanging up his boots, lol.

great article. ...had heard of FP as part of "Five Violins" but didn't realise he had such a fantastic scoring record.Good to see such a legendary player getting recognition so many years later.Some of the modern players would not be anywhere...

great article. ...had heard of FP as part of "Five Violins" but didn't realise he had such a fantastic scoring record.Good to see such a legendary player getting recognition so many years later.Some of the modern players would not be anywhere near his standard.

Read More
John Bent
There are no comments posted here yet