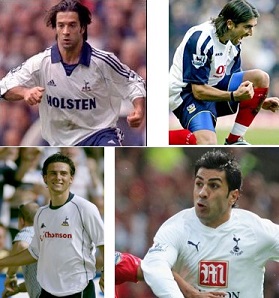 The last three decades has seen a huge increase in the number of Portuguese footballers plying their trade abroad, and Tottenham Hotspur have had its fair share of players who have made the jump from the Primeira Liga to the Premier League. In association with spursforlife.com, PortuGOAL takes a look at the history of Portuguese players who represented the north London club.

Most of these signings have come during a bleak period of mediocrity for Spurs. Some lit up White Hart Lane with flashes of brilliance and flair and were important in revitalising average, plodding squads, although on the whole there wasn’t much success for any of the Portuguese stars.

In fact, the best product from Portugal is probably Eric Dier, who despite his English nationality, received his academic, cultural and footballing education from Portugal. Nevertheless, some vivid memories and moments have been created by the following sextet of players.

The first Portuguese signing that Spurs made was Lisbon-born José Dominguez. Small, skilful and lightning fast, he made an impressive start against Derby. With his low centre of gravity, he was an underestimated force and very different to what most Premier League defenders were used to facing. On the other hand, Dominguez often struggled to handle the kind of strength and power required in the English top flight, and there were too many instances of him getting bullied off the ball. There isn’t much he could really do about it given his diminutive stature, especially at a time when physical attributes generally garnered more appreciation than technical ability.

However, his style of play was something of a beacon of light in an otherwise bleak period for the club. It was a squad that was lacking in guile and creativity. Dominguez provided this along with David Ginola. Whilst his end product was not as good as the Frenchman’s, he still helped to create this change in the club.

Postiga is probably the most well-known Portuguese player to play for Spurs. Sadly, it is mostly for infamous reasons; his time at the club was a torrid one. Fresh from domestic champions Porto under José Mourinho, he could only muster one Premier League goal. He couldn’t adapt to the English style of football and within a season he was back at his old club. Highly thought of at the time, Postiga’s move had initially been viewed as a stepping stone to greener fields than at Spurs. Instead, all the promise that he had prior to joining the North London outfit fizzled out by the time he left just one year later.

Curiously, the striker did get a measure of “payback” almost immediately for his unhappy spell in England, scoring a crucial equaliser and then a Panenka penalty in the subsequent shootout as Portugal overcame the Three Lions in a memorable Euro 2004 quarter-final.

Most Spurs fans will remember Pedro Mendes for that disallowed goal against Manchester United. He lobbed Roy Carroll with an outrageous effort from the halfway line,

the ball bouncing over the line before the keeper hastily flicked it back out of the net. The referee’s mistake was a crucial decision as the incident occurred in the last minute of the match and cost the club a famous victory and vital points. At the time it sparked the early conversation about the need for video technology in football. Martin Jol and Sir Alex Ferguson both voiced their opinions on how this change would benefit the game, so long as it did not take too much time. This was in 2005. Thirteen years later, the modern game is only just tentatively introducing the change.

Mendes only made 30 appearances for the club, scoring one league goal. In his second season, his Tottenham career was all but over, utilised by Jol only as a rotation player. Michael Carrick had replaced him for his role in midfield. He later transferred to Portsmouth where he then worked with Harry Redknapp, who subsequently became boss at Spurs. There was a mooted transfer and a potential return for Mendes, but this fell through in 2008.

Within the first half of his first match in England, Ricardo Rocha received a blow to his left eye. This gave him a small scar, when he first donned the Spurs crest against Southend United. In a way, this could be said to symbolise the English game: it is often an unforgiving, brutal affair. “In Portugal I was a tough guy – in England everyone’s a tough guy,” Rocha told PortuGOAL in an interview at the time.

Rocha failed to settle at Tottenham and was not helped by manager Martin Jol’s decision to play him at right-back, due to the injuries and a lack of cover there. “It’s not easy,” he admitted in an interview on the club’s official website. “It’s difficult to push on because I don’t have the skills to do that. My partners defend well so I can do it sometimes, but the main thing is to do my best,” added the defender in a startlingly honest interview about his own footballing ability.

He was a more traditional centre-half, and certainly not a ball-playing defender like today’s Jan Vertonghen or Toby Alderweireld. Unfortunately for the former Benfica man, Jol lost faith in Rocha and he became one of a string of players released by the club. He only made a smattering of Premier League appearances and left little impression from his time at the club, but went on to have a happier time in England at Portsmouth where he became and remains something of a cult hero.

Lameiras is the youngest and most recent Portuguese Spurs player. He now plies his trade at Plymouth Argyle in League One. He never made a Premier League appearance for Spurs, despite a promising start in the youth academy. His main assets are his pace and his skill, deployable on either wing, and he earned praise for his ball control, retention and the general intelligence of his play.

However, he failed to break through mainly due to the calibre of players in front of him. Gareth Bale and Aaron Lennon were two of the big senior players, whilst the young talents of Ryan Fredericks and Alex Pritchard were breaking through at the time. Lameiras just couldn’t outcompete that talent.

It may be cheating a little given his English nationality, but Eric Dier makes this list as an import from Portugal. He started his career in Lisbon at Sporting, having lived in the Iberian country from seven years of age until his late teens. Therefore, he received a Portuguese education, speaks the language fluently, and brings that quintessentially Primeira Liga passing ability to Tottenham. Having impressed for Sporting both as a centre-back and in midfield, he has become a brilliant young player in the latter position and is a firm fixture in the England national team set-up.