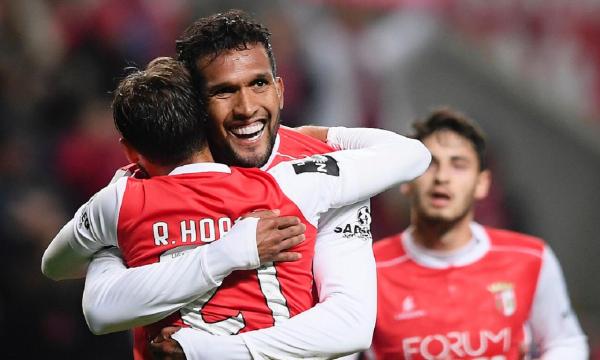 Fresh from an interlude of European football, attentions were drawn back to the populated hunt for first place in the Primeira Liga, as surprise package Sporting de Braga got us under away versus Feirense on Friday night.

The ‘Arsenalistas’ made light work of the relegation candidates with a 4-0 victory to momentarily push up to second, as FC Porto did their bit to secure first place for another week with a hard-earned triumph away to Santa Clara, defeating the newly-promoted side 2-1.

A narrow victory would be all Benfica required as well in their visit to Madeira on Sunday, as Marítimo succumbed to a 1-0 loss, reserving the goals for Sporting’s reception of Nacional at Alvalade, the Lions coming from two goals down for a 5-2 win to reclaim second place in the standings. PortuGOAL rounds up this weekend’s to action.

With a meeting versus Benfica just around the corner, it was imperative for Braga to land all three points prior to their journey to Lisbon, as 16th-placed Feirense came to town.

Following a positive start, Abel Ferreira’s side would find the breakthrough in the 28th minute via Dyego Sousa, pouncing onto a long punt upfield before finding the bottom-right corner with a composed finish.

Sousa was back for seconds on the brink of half-time, climbing high inside the box to head in Bruno Xadas’ in-swinging cross in the 44th minute and give the hosts a 2-0 lead going into the break.

Reasserting their dominance in the second period, Ricardo Horta almost grabbed a third for his side when finding enough space to dispatch a shot inside the box prior to firing wide, but the opportunities kept arising after Raúl Silva was brought down inside the box for a Braga penalty.

On a hat-trick, Sousa was quick to step up to the spot and prolong his healthy relationship with the goals, making it 3-0 in the 68th minute with a cool conversion.

Paulinho earned his side a second penalty of the day in the 82nd minute, with Wilson Eduardo concluding a 4-0 score-line from the 12-yard-mark to put pressure on second-placed Sporting and Porto at the top.

Looking to nail down first place for another fixture, Porto travelled to the island of Azores to take on Santa Clara in hope of securing their 13th consecutive victory in all competitions.

Tiquinho Soares came close to setting the Dragons onto the right path when his finish from a corner was cleared off the line in the 3rd minute, before the same fate at the other end stood to deny Patrick Vieira’s strike in the 20th minute prior to Éder Militão’s intervention.

Porto’s spanner in the works was on the agenda, however, and it was ex-player Zé Manuel who popped up inside the box to power in the opener with his head in the 37th minute.

Santa Clara’s lead wouldn’t extend itself through the half-time break thanks to Soares’ timely equaliser in the 45th minute, with the Brazilian finishing off Moussa Marega’s cross on the turn with a simple back-post header.

Porto’s creator traded his role for that of a goal-scorer in the second half, as Marega reacted first to Soares’ strike at goal to turn the game on it’s head in the 55th minute on the rebound. At the other end, a couple of key saves from Iker Casillas kept things tight at the back for the Primeira Liga holders, dragging them over the line with a 2-1 victory come full time.

With no wins in their last two visits to the Estádio dos Barreiros in the league for Rui Vitória and his Benfica side, the pressure was on the under-fire manager to deliver versus Marítimo and keep apace with the leaders of the pack.

The hosts caused their fair share of troubles to the Eagles, going close in the 29th minute through Josip Vukovic’s side-footed volley roaming just wide of the near post.

Alejandro Grimaldo attempted to force Benfica’s case at the other end before controversy struck in the Marítimo box just before half-time, with Jonas winning his side a penalty before converting from the 12-yard-mark.

Jorge Correa neared the equaliser for the Madeiran outfit on the hour mark, heading over on the bounce from the back-post prior to an uninspiring half of football maintaining the score at 1-0 to Benfica come full-time.

An ever-growing turnout at the Alvalade made their presence felt once more in hope of seeing Marcel Keizer’s free-scoring side put on another show, as the Lions looked to make it six wins from six under the Dutch manager.

Nacional brought gifts of their own, however, stunning the home crowd not once but twice inside the opening half hour, as João Camacho opened the scoring before to Aleksandar Palocevic’s header in off the bar in the 26th minute pushed Costinha's team two goals ahead.

A clip on Bas Dost inside the box enabled the Sporting goal-grabber to pull a goal back from the penalty spot just ten minutes later, as the Green and Whites halved their deficit going into the break.

Dost continued to cause all the danger in the second period when being set through on goal in the 70th minute, as Bruno Fernandes picked up the scraps from the ex-Wolfsburg man’s one-on-one attempt to tap in the equaliser.

Sporting’s Jeremy Mathieu completed the turnaround from a well-placed free-kick in the 75th minute, moments before a second penalty for Dost to tuck away saw Keizer’s men hit Nacional for four.

Bruno Fernandes was on hand to add the finishing touches to yet another big win for the Lions in the 91st minute, following up on an initial headed effort to smash goal number five in on his left foot, as Sporting moved back to being within touching distance of first-placed Porto.

Soares is a beast.
Roma in the draw - it could have been much worse. No idea if we'll go through tho.

Mental second half for Sporting and what a free-kick by Mathieu. I was wondering where Bruno Fernandes had been and then he pops up...

Soares is a beast.
Roma in the draw - it could have been much worse. No idea if we'll go through tho.

Mental second half for Sporting and what a free-kick by Mathieu. I was wondering where Bruno Fernandes had been and then he pops up with that dominant performance.

Porto were made to work hard for that victory, Iker Casillas was the reason Porto left with 3 points, still Porto on a impressive run.

Sporting? Well that defense needs a...

Porto were made to work hard for that victory, Iker Casillas was the reason Porto left with 3 points, still Porto on a impressive run.

Sporting? Well that defense needs a lot of help, good thing January is around the corner, Jefferson can't be starting games he has lost his pace and is now the main weakness in defense, Mathieu is such a top defender I wasn't too keen on him when he first joined but he is a proven experienced defender who knows how to take freekicks! He joined the attack a lot that game.

Sporting were completely outplayed in the first half at home again like against Desportivo Aves, so what is Sporting's mindset? play good only in the 2nd half? that might work with the smaller teams but when it comes to Europa League knockouts not conceding at home would be a great help.

Still good to see Sporting is capable of managing comebacks but they really need to improve in defense.

Read More
Eduardo
There are no comments posted here yet