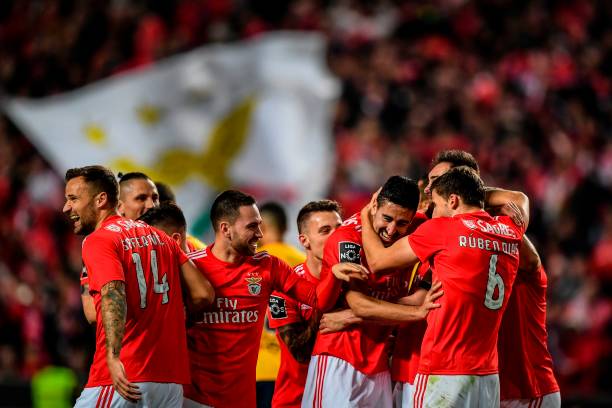 Ahead of the festive break, the Primeira Liga fixture machine was on hand to dish out the Christmas crackers for us all to tuck into, as the so-called top six battled amongst themselves in the final round of 2018 games.

FC Porto welcomed Rio Ave, momentarily in 10th, to the Estádio do Dragão to kick-off the drama on Sunday afternoon, as they came back from a goal down to defeat the Vilacondenses 2-1.

Benfica passed their test with flying colours against Sporting de Braga, no less, treating their home support to a 6-2 thrashing over the northern outfit before pushing up to second place in the table.

Surrendering the position were third-placed Sporting, who succumbed to their first defeat under Marcel Keizer with a 1-0 loss away to Vitória de Guimarães. Here’s how the action at the top unfolded.

A run of 14 straight wins made league leaders Porto hot favourites for their clash versus Rio Ave, who this week saw their manager José Gomes swap the green and white outfit for life in the Sky Bet Championship, taking over at Reading.

Rio Ave were keen to ensure the manager’s absence wasn’t to be felt in their quest to climb back up to sixth place, however, taking the lead as early as the 12th minute through the free-scoring Vinícius. But Porto’s response was prompt, as Yacine Brahimi reacted first to Tiquinho Soares’ back-post header across goal to volley in from close range.

No more than ten minutes later, Moussa Marega added the nine goals he has already scored against Rio Ave throughout his spell in Portugal with Porto’s second, out-muscling Nelson Monte before threading a half-volley in at the near post.

A chance either side of the half-time break for Jesús Corona promised to amplify the score further for the hosts, as the Mexican struggled to get both his efforts inside the area on target. Rio Ave, in turn, would get no closer to a equaliser, signing out with 2-1 defeat and a sending off for key man Fábio Coentrão after an altercation with ex-teammate Maxi Pereira late on.

Attracting their fair share of the limelight, there was a bit of a blockbuster feel to Sporting de Braga’s visit to Lisbon, as third met fourth in a battle neither side could really afford to lose out on at Benfica’s Estádio da Luz.

The encounter erupted with a clean finish from former Braga man Pizzi to give Benfica the lead in the 19th minute, as Fransérgio lashed the top of the bar in response with a wicked strike from range.

Jardel made it 2-0 with a bundled header from a corner in the 39th minute before Alejandro Grimaldo, early in the second half, took advantage of a passive Braga defence to make it 3-0 with a finish from a tight angle. Abel Ferreira’s side pulled a goal back through Dyego Sousa’s header but the Eagles were straight back onto their goal-scoring feast with a Jonas’ tap-in in the 54th minute.

The 64th minute saw both of Rui Vitória’s wingers combine with Andrija Zivkovic attacking the byline before delivering a low cross for Franco Cervi to steer home, as Benfica made it 5-1.

The hosts reserved the best for last, with André Almeida raising the crowd to its feet with a looping volley from the edge of the box, hitting Braga for six prior to João Novais’ consolation goal. With a 6-2 win, Benfica leapfrogged both Braga and Sporting to trail Porto by four points in second.

Yet another tricky fixture for Keizer’s thus far unstoppable Sporting saw the Lions make the trip to the Estádio Dom Afonso Henriques where fifth-placed Guimarães awaited in hope of inflicting an upset.

The compact side led by ex-Porto man Luis Castro caused the Green and Whites problems in the early stages, complicating matters further with the opener through Tozé, whose well-hit volley from range took a wicked deflection off Jeremy Mathieu before finding its way in after 26 minutes of football.

Chance creation proved difficult for Sporting in the second period, going close once through former Vitória man Raphinha prior to witnessing Renan Ribeiro fend off long-range strikes at the other end from Ola John and Davidson.

The Brazilian shot-stopper provided two more important saves from Pedro Rodrigues and Oscar Estupiñan efforts, either side of Pedro Henrique’s header onto the bar, as the Lions fumbled to a 1-0 defeat for the first time under their new manager.

E
This comment was minimized by the moderator on the site

Braga always plays well against Sporting & Porto but for Benfica they always seem just to roll over and not put as much effort. Just an observation

Salvador, the Braga President testified on behalf of the defense of Benfica in their corruption case, which coincidentally, has been swept under the rug.

Your observation is very astute. Braga are lapdogs for Benfica. I hope LFV paid them well.