Sporting and FC Porto settle for goalless Clássico at Alvalade 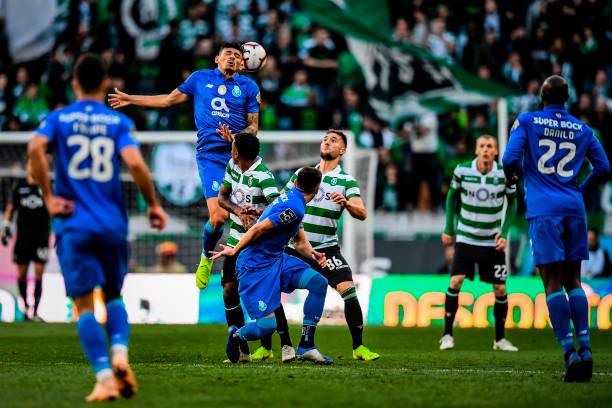 Sporting and FC Porto failed to go beyond a 0-0 draw in their first meeting of the 2018/19 season, as the Lions welcomed the league leaders for a rare afternoon kick-off at the Alvalade.

A very tight first-half with minimal chances set the tone for a disciplined outing from the two rivals, with the likes of Moussa Marega and Nemanja Gudelj coming close to shaking things up in the second half.

The deadlock wouldn't be broken, however, bringing to an end the Dragon's run of 18 consecutive victories and keeping Sporting eight points away from top spot at the halfway mark of the Primeira Liga season.

Ahead of his first ‘Clássico’ as Sporting manager, Marcel Keizer welcomed Bas Dost back into the starting line-up, with Jefferson also coming into the fold to deputise for the suspended Marcos Acuña. In the away end, Pepe’s anticipated comeback was left on ice in favour of Felipe’s return, partnering Éder Militão at the heart of defence.

A very tight affair saw both sides cancel each other out for much of the first period, as Porto looked towards Marega to cause the danger from the right in the 28th minute prior to Gudelj's last-ditch intervention, cutting out the Malian's quizzing low cross.

At the other end, Felipe was doing his bit to thwart the hosts, as Sporting also attacked through the right flank via Bruno Gaspar before his cross, aimed at the back-post, was met by Nani's volley and cleared by the Porto defence.

Sérgio Conceição was forced to look for solutions off the bench following Maxi Pereira's injury on the brink of half-time, prompting the introduction of Óliver Torres and Porto's switch to a 4-3-3.

From one right back to another, Sporting's Bruno Gaspar barely made it out in the second period, as the ex-Vitória de Guimarães man made way for Stefan Ristovski through injury after just two minutes for the hosts.

The first big chance of the game fell Porto's way in the 56th minute, following Jesús Corona's dinked cross into the box, but Tiquinho Soares got the execution all wrong on the volley to facilitate Renan Ribeiro's job between the sticks.

Marega provided a different kind of threat on the hour-mark, picking up the scraps from a left-sided cross before attempting to bend in a shot on his weaker foot, floating over the crossbar with some caution. The Lions replied almost immediately with a testing strike from range by Bruno Fernandes, as Iker Casillas parried away the bouncing effort.

Nani got the better of Corona in the 69th minute to aim a cross at Dost, requiring a brave intervention from Militão to divert the flight of the ball, as it roamed somewhat dangerously out for a corner.

Sporting placed their bets once more on shooting from range in the 76th minute, with Gudelj demonstrating his long-range abilities prior to a top save from Casillas to tip the Serbian's effort over the bar. Ristovski was on hand to set Dost soon after with a cross a tad too high for the Dutchman, leaving the former Wolfsburg man powerless to head high and wide from the back-post.

Full-time came without a goal for either side, leaving Sporting 4th and eight points behind league-leaders Porto, who saw the gap at the top cut short to five points following Benfica's 2-0 win over Santa Clara on Friday night

DC
This comment was minimized by the moderator on the site

Pertovic also came in for Sporting towards the end - that’s missing from your lineup list, fyi.

DC
There are no comments posted here yet