As you were at table top 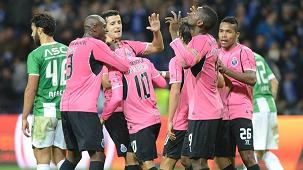 Of the teams occupying the top seven positions before this weekend's programme, only Belenenses dropped points with a goalless draw at home to Arouca (Paços de Ferreira host Estoril tonight).

Porto, Braga and Sporting clocked up convincing wins, while the leading duo Benfica and Vitória Guimarães won away at Académica and at home to Moreirense respectively.

Sérgio Conceição's Braga are hitting an impressive run of form. Prior to last week the Arsenalistas had not won a game all season away from home, but that has changed in spectacular style. The Guerreiros do Minho followed up their morale-boosting Portuguese Cup victory over local rivals Vitória Guimarães with a 6-1 demolition of rock-bottom Penafiel on Saturday evening.

Braga's rich vein of form will be put to the test next week as they welcome Vitória Guimarães to the Quarry on Sunday evening, this time the two fierce rivals going head to head in the Primeira Liga.

Porto, playing in a pink kit, also won by a five-goal margin, at home to Rio Ave. With little over ten minutes remaining the Dragons were only one goal to the good thanks to Tello's strike immediately after half time.

But the home fans at the Estádio do Dragão were treated to a late four-goal flurry, Jackson Martínez, Alex Sandro, Oliver Torres and Danilo finding the target. Curiously, coach Julen Lopetegui said that his side had played better in the first half, which ended 0-0, than when hitting five in the second half.

No slip-up from Lisbon giants

Benfica duly saw off Académica in Coimbra thanks to a neat Nico Gaitán goal early doors and a Luisão header on the stroke of half time. Sporting left it to the second half to beat Vitória Setúbal at the Alvalade. Sporting coach Marco Silva changed tactics by selecting two strikers from the start, and it proved a wise decision as Slimani bagged a brace and Fredy Montero continued his recent rejuvenation with the other goal.

Vitória Guimarães continue their sensational Liga campaign with win number 8 from 11 matches to remain firm in second place in the table. But Rui Vitória's men were made to work hard by neighbours Moreirense, who took an early lead through Elizio.

André André equalised from the penalty spot before half time, and the home fans had to wait until the 82nd minute to celebrate what turned out to be the winner, thanks to a fine header by Jonatan Alvez.

Marítimo snapped out of their recent slump with a 4-0 thrashing of Boavista in Madeira. The islanders' job was made a lot easier after a nightmare five-minute period for Boavista midway through the second half when they had three players sent off - Philipe Sampaio, Carlos Santos and Mika.

Moussa Maazou was again among the scorers for Marítimo, slotting home a penalty. The other goals were scored by Brito (in his own net), Ruben Ferreira and Dyego Sousa.

Belenenses dropped to fifth place after being held to a goalless draw at the Restelo by Arouca, Tiago Silva missing a penalty for the hosts, while Gil Vicente and Nacional also drew 0-0. Round 11 ends tonight with Paços de Ferreira-Estoril.

I keenly follow Sporting mainly because of the good they are doing to the Seleção. They are playing an exciting brand of football too.
Would love for Nani to perform at the same level that he has since moving to Sporting till the end of the season.