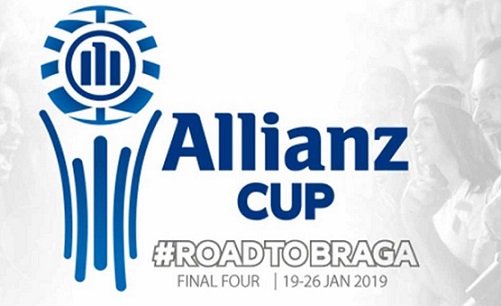 The Final Four of the Taça da Liga held in Braga’s stunning stadium this week was supposed to showcase all that was good about Portuguese football, as the country’s top four teams faced off for the first piece of silverware in the 2018/19 season.

After the two semi-finals played on successive days, Porto and Sporting booked their place in Saturday’s final, but in an accurate reflection of the domestic game in Portugal, the violent verbal reactions to refereeing controversies have completely overshadowed the actual football.

It all started promisingly. Bitter rivals Benfica and Porto kicked off the action in the first semi-final on Tuesday evening. With the two sets of fans creating a tremendous atmosphere, both teams tore into each other from the off, producing a breathless action-packed first forty-five minutes.

With less than 120 seconds on the clock, each team had come desperately close to scoring, Benfica goalkeeper Svilar saving well from Porto forward Marega, then João Félix bringing a flying save out of Porto number one Vana, with the Dragons’ defence somehow keeping the ball out of the net in the subsequent scramble. The tone was set for a thrilling opening half.

Both goalkeepers were being kept busy as the lively Rafa and André Pereira were again denied at each end, before Porto struck first in the 24th minute, Óliver Torres robbing the ball off Gabriel, immediately releasing Marega, whose effort was kept out by Svilar’s outstretched leg, but Brahimi was on hand to pick up the rebound for an easy finish. Benfica’s players complained the move had started with a foul by Torres, but after consulting the VAR, the referee waved away the protests.

The Eagles were soon level however, Rafa shooting first-time into an empty net after Vana had saved Seferovic’s initial effort. Porto retook the lead almost immediately, as Corona’s clever knock-back paved the way for Marega to score from close range. There was no stop to the excitement as a well-worked break by Benfica – against a suicidally high Porto defence – ended with Pizzi putting the ball in the net, only for the goal to be ruled out for offside in the build-up after consultation with VAR.

It initially appeared we were in for more of the same after the break as Seferovic raced clear but missed a one-on-one against Vana in the first minute of the second half. However, Porto lowered their block and successfully focused on denying Benfica space behind their defence, and the chances dried up for Bruno Lage’s team. Porto killed the game in the 85th minute as Soares picked out Fernando Andrade with a piercing throughball and the new signing from Santa Clara made no mistake to complete a 3-1 win.

Instead of dwelling on the many talking points from a highly entertaining match such as the new-look aggressive Óliver Torres, the effervescent Rafa, the gung-ho approach adopted by both teams in marked contrast to the dull, cagey recent clássicos, the focus predictably turned to the refereeing. Benfica president Luís Filipe Vieira launched a ferocious tirade against Fábio Veríssimo, saying “this man should never officiate again.” Coincidence or not, the very next day Veríssimo requested leave from his refereeing duties.

While the semi-finals served to highlight one of Portuguese football’s major problems – widely perceived incompetence and constant suspicion of corruption as regards the referees – the second match highlighted another worrying issue, as a paltry crowed of just 10,000 spectators turned up for a supposed showpiece occasion in the football calendar.

Braga had the perfect start as Dyego Sousa, who had scored the winner in the league encounter between the two teams earlier in the season, ghosted between Sporting centre-backs Mathieu and Coates to head Braga into the lead from a peach of a João Novais cross in the 3rd minute.

The hosts were overwhelming Sporting and should have doubled their lead shortly afterwards as Wilson Eduardo got the ball stuck under his feet and failed to get his shot off cleanly when he seemed certain to score.

Sporting gradually worked their way into the match, and Raphinha brought a sharp diving save out of Marafona after some good individual play, and shortly afterward the Brazilian winger timed his run perfectly to race through on goal, only to get an attempted lob wrong and miss a one-on-one. The pressure from the Lions told in the 37th minute as Uruguayan centre-back Sebastian Coates rose majestically to head in powerfully from a corner.

Braga began the second half like they had started the first, on the front foot, and had the ball in the net soon after the restart. Novais headed in Wilson Eduardo’s cross but the goal was chalked off by the referee after consultation with VAR for a foul in the build-up by Dyego Sousa on Acuña. Chances were at a premium, but late on the home side threatened twice in quick succession as a Novais free kick was well saved by Sporting goalkeeper Renan Ribeiro, and from the resulting corner Raul Silva’s header thudded against the crossbar.

No further goals were added which meant a penalty shootout, which began in remarkable fashion as none of the first four penalty takers managed to convert their spot kick. Sporting would eventually come out on top, with goalkeeper Renan the hero saving three times.

As happened the previous night, the post-match comments were dominated by complaints against the officiating with Braga coach Abel producing an extraordinary press conference and club president Antonio Salvador predictably launching a diatribe against the referee. Both men lambasted the decision to rule out Braga’s goal – while conveniently ignoring Sporting’s strong claims for a late penalty. Sporting president Frederico Varandas got in the act, talking about “hysterical reactions”, saying refereeing in Portugal has improved since the introduction of VAR and lamenting the fact that his Benfica counterpart Vieira had said Veríssimo should step down and less than 24 hours later that is precisely what happened.

Just another week in Portuguese football…

Braga management had to be the most annoying one in the league, ok the disallowed goal was because of a soft foul, but the penalty appeal on Coates I have seen those given but you won't hear Braga talk about that no sir.

Even so they did more...

Braga management had to be the most annoying one in the league, ok the disallowed goal was because of a soft foul, but the penalty appeal on Coates I have seen those given but you won't hear Braga talk about that no sir.

Even so they did more than Sporting to win, Sporting seriously need to get their shit together defensively.

That penalty shootout was a classic comedy, when Braga hit the post after Sporting did, I was laughing.

I can see Benfica's outrage with the disallowed goal but it was exactly like Rafinha in Sporting's last league match, it's one of those bullsh.t ones that goes against you in VAR.

Braga is just upset they aren’t in the final
Against their buddies benfica.

When benfica beat them 6-2 they were smiling with joy .

true there are picks of Benfica/ braga coaches shaking hands at the end both smiling after losing by 6. Now as for sporting after last years mess I didn't expected anything this year yet Keizer gave has some good football and now a taca da liga...

true there are picks of Benfica/ braga coaches shaking hands at the end both smiling after losing by 6. Now as for sporting after last years mess I didn't expected anything this year yet Keizer gave has some good football and now a taca da liga against Porto. if there is karma for Porto my dream is for sporting going to Porto on final game of the season down by 2 points and win that game LOL, hey that's a very very long shot but that's why we watch the games!!!